Review by Leslie Byron Pitt What can we say about a film called Tomboy? We can say that this transgender switching revenge flick is as offensive as it is boring. What’s more frustrating is that it’s co-written and directed by the great Walter Hill whose stripped-down features of previous eras were brilliant examples of both […] 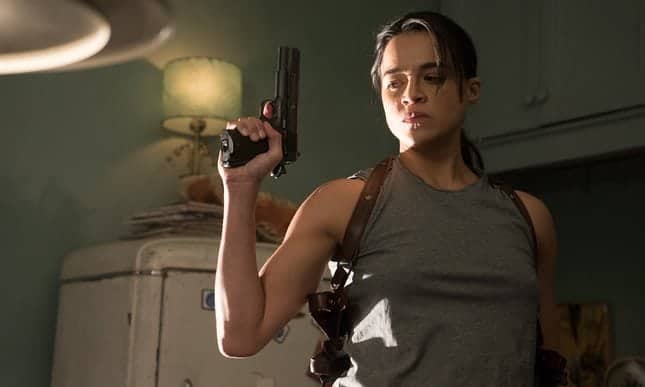 What can we say about a film called Tomboy? We can say that this transgender switching revenge flick is as offensive as it is boring. What’s more frustrating is that it’s co-written and directed by the great Walter Hill whose stripped-down features of previous eras were brilliant examples of both social commentary and economical entertainment. From The Warriors (1979) to 48 Hours (1982) this is a filmmaker who not only has something to say but has the ability to say it like a short swift blow to the gut. All the more unfortunate that Hill’s last two feature film outings have been as limp as broth soaked ramen.

I do not say any of this with relish. It’s so easy to see this as a spiteful little film writer taking pot shots at creatives at the latter end of their career. However, Tomboy, much like Hill’s Bullet to the Head (2012) hold none of the same spark and urgency that made the likes of Trespass (1992) or Southern Comfort (1981) so entertaining.

Tomboy’s woeful tale strives for an element of relevancy by having its main conceit involve its male hitman (played unconvincingly by Michelle Rodriguez) be the unwilling victim of a gender swap operation. This is an upsetting plot device for the sheer opportunistic nature of its execution. Rodriguez who is well known for her tough-talking badass female roles is at first given unbelievable prosthetics to try and coax the audience to believe that she is a man. Then the rest of the film tries to play out that her character of Frank is a rather mannish, sometimes ugly, sometimes attractive (dependant on what the scene wants) woman. Given the unfortunate and ugly battles that those who are of transgender have to face, Tomboy decides to wrap their situation into a loathsome little ball and display the proceedings as a cheap plot device with an utter lack of conviction. This isn’t Pre-Destination in which a similar narrative is played out with intelligence and drama. Tomboy decides that the best way to deal with an (unwilling) transgender characters is to throw them into a laborious revenge tale with their reason for being as nothing more than a trashy inciting incident. This film comes from a man whose work on race in America still feels relevant and insightful. One must wonder at what point did Hill consider any of this an idea worth pursuing.

Is there anything here to recommend? Well as Hill is still a director of some command, he’s able to gather a formidable cast of actors together to spout off witless exposition. Michelle Rodriguez should be allowed a develop a more interesting character than we see here. Her skillset as an action star is so often understated and here she should have been allowed to flourish. However, she is hobbled by the film’s weak screenplay. The same goes for the supporting cast. It’s quite despairing to see Sigourney Weaver, Tony Shalhoub and Anthony LaPaglia slumming it in a film that is not invested in delivering anything worthy of their talents. I’d say the same for Hill who gives us clean efficient direction, but hell, he also wrote the thing.

Tomboy is on DVD from Monday April 3rd.