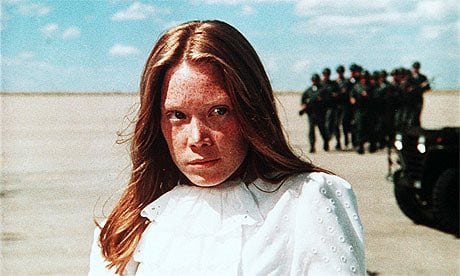 Badlands is Terrence Malick’s Bonnie and Clyde. It went on to influence the later films True Romance and Natural Born Killers. This is Terrence Malick first film, who before dipping his toe into filmmaking had been a Rhode Scholar recognized for translated Heidegger. He directed it at the age of 30, it kick started his career and also, arguably, that of Martin Sheens’.

Inspired by the real life 1958 killing spree of Charles Starkweather and Caril-Ann Fugate, Badlands is the story of 15 year old Holly (Sissy Spacek), a young, red haired, clarinet playing, baton twirling, suburban girl who takes up with aimless, 25 year old, James Dean lookalike, Kit (Martin Sheen). After Holly’s father forbids Kit from seeing his daughter anymore, Kit kills him and the two go on the run. What ensues, as the two dodge bounty hunters and law men, is a cross country killing spree.

What’s most interesting about Badlands is the way it treats its characters and their apparent lack of morality, psychological attachment and motivation. Kit kills indiscriminately, but the violence is never sensationalised and the characters don’t dwell on their actions. Malick strips Kit and Holly of a clearly defined identity and invites the viewer to deconstruct them and their actions, actively participating us in Holly and Kits search for themselves.

The film’s plot is served by Holly’s narration. It is simple, wondering and feels detached, as if she were reading an account of a time she chronicled in a diary. It gives Badlands an eerie fairy tale type quality that heightens the moral ambivalence of the runaways and the situations they find themselves in.

Unlike many of Terrence Malick’s later films, Badlands, is his most classically structured. However, the film does points to many of the stylistic methods that have come to define his approach to filmmaking. The film is episodic and composed of extra long shots, although they are static as opposed to his later films which employ a much more fluid, kinetic shooting style, and of course, for no Malick film would be complete without them, scenes captured during the beautiful “magic hour” just before nightfall.

This is a killer film and an interesting insight into the beginning of Malick’s filmmaking career.