Retrospekt is a drama from director Esther Rots, which comes nearly 10 years after her 2009 debut, Can Go Through Skin. The plot follows, Mette (Circé Lethem) a social worker who specialises in supporting female victims of domestic abuse, and her descent into danger by getting too close to a case she is handling. The action is […] 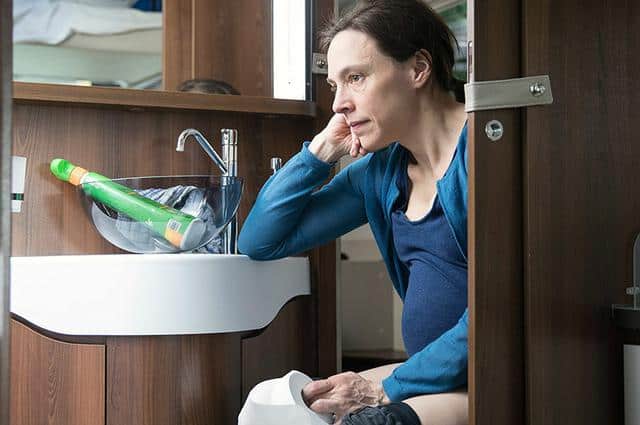 Retrospekt is a drama from director Esther Rots, which comes nearly 10 years after her 2009 debut, Can Go Through Skin. The plot follows, Mette (Circé Lethem) a social worker who specialises in supporting female victims of domestic abuse, and her descent into danger by getting too close to a case she is handling.

The action is told through a non-linear narrative that relies heavily on flashbacks and flash-forwards creating the sense that the film is an elaborate but horrifying jigsaw puzzle. The audience is placed at times at arm’s length due to the confusing jumps in plot, but in the latter half when the dots start to join together, it is clear that Rots wanted to the audience to feel the isolation beforehand. All of the twists and turns in the narrative lead up to a traumatic event that leave Mette with serious mental and physical disabilities.

For all of the twisting and turning however, the narrative is surprisingly thin, and even at 100 minutes long it can feel like a slog. The narrative conceit is expected to do a lot of the film’s heavy lifting and this is to the detriment of the characters’ development. Mette obviously goes through a profound change, but her husband, Simon (Martijn Van Der Veen) and daughter, Harrie (played by both Felice and Frederique de Bruijn) remain pretty much exactly the same as they are at the beginning of the film. There are moments when Simon’s temperament changes, but these moments are done in such broad strokes that they can’t help but feel manipulative.

The narrative conceit is also obvious from the opening 30 minutes of the film, but Rots keeps teasing the audience with the precise details; when they do come, they’re underwhelming and do not feel enough to have sat through an hour of non-linear sequences. The film feels like it is chasing its own tail and the director is obviously keen to disorientate the audience but, for this critic, if you are asking the audience to willingly buy into such a conceit then at least have the decency to move the narrative forward in unexpected and moving ways.

There are two moments in the film that made me sit up and take notice, one of which is a long take of Mette being given a shower by a nurse in her rehabilitation centre. Mette is sobbing through the vast majority of the take and it is truly a moving and saddening image which the film is so rarely able to replicate. Another is when Simon brings Harrie to see Mette. Unable to say no, Mette is arrestingly reduced to shrieks, and jerking her body in an attempt to leave the situation; something impossible due to her being in a wheelchair.

The film’s soundtrack offers up a number of misplaced, semi-operatic interludes in English. Some of the lyrics bear a relevance to the tone and events of the film, but mostly it’s like ending up at a stage at the back of a festival, too many drinks deep and wondering what the hell is going on.

The colour grading makes the film’s palette grey and miserable, with only baby pink overlays at the beginning and end offering any exciting colour to the piece. The performances aside from Mette’s are one note, and the villain, Frank (Matteo van Der Grin), is not particularly threatening or menacing. All of which adds up into a product that is infinitely less satisfying than should be the case.