Happy Death Day 2 UDir: Christopher LandonIt would take only two words to sum up the concept of the first Happy Death Day: “Groundhog Slay”. Taking the time looping concept of the classic Bill Murray comedy and applying it to a homage to post Scream comedy inflected 90s slashers, the initial entry in this now […]

by Sam Inglis
in Film, Film Reviews, New Movies, The Week in Movies 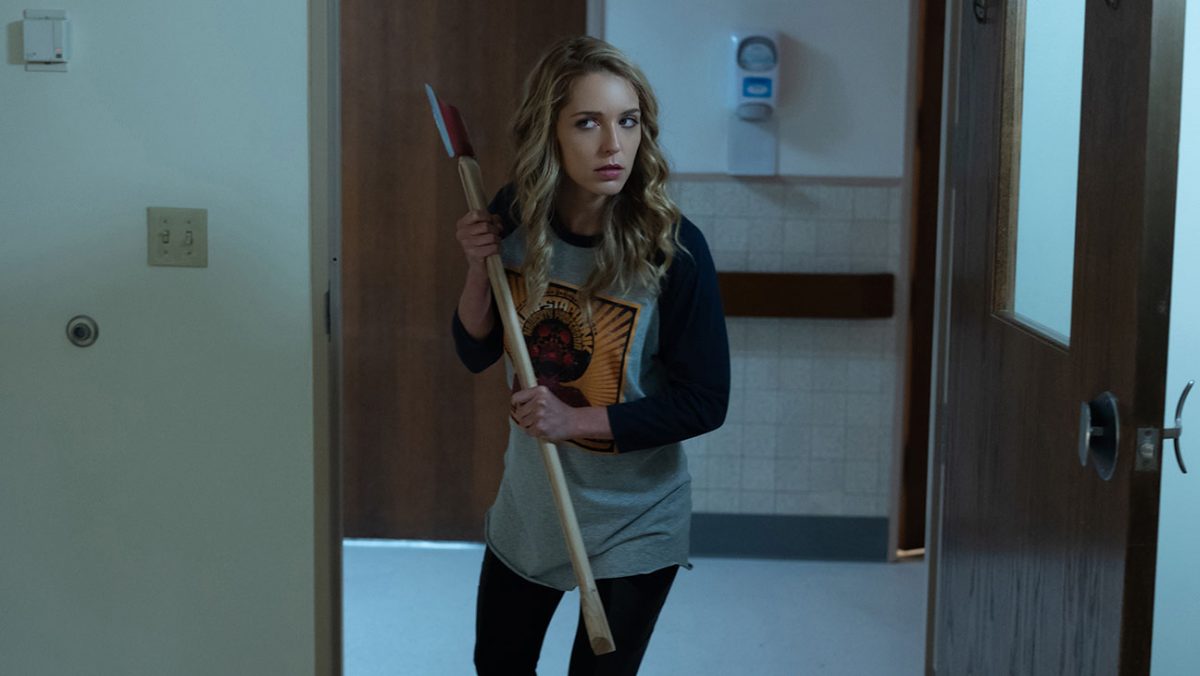 Happy Death Day 2 U
Dir: Christopher Landon
It would take only two words to sum up the concept of the first Happy Death Day: “Groundhog Slay”. Taking the time looping concept of the classic Bill Murray comedy and applying it to a homage to post Scream comedy inflected 90s slashers, the initial entry in this now newly minted franchise was warmly received and a sleeper hit. For me, while it had going for it a versatile and highly entertaining final girl performance by Jessica Rothe, the film didn’t entirely work. The quirky comedy hit, but it often felt as though the film was not all that interested in its own slasher elements. It is then perhaps a good thing that this sequel takes a different generic direction.

Happy Death Day 2 U takes a Back to the Future Part 2 approach to its predecessor. Like Marty, Jessica Rothe’s Tree finds herself back inside the events of the first film, initially believing she’s merely observing them from a different point of view, she discovers that in fact the experiments that caused the time loop in the first film have sent her to an alternate dimension. There is still a killer but the solution to the mystery is now different, as are many other things.

If the first film seemed not particularly care about its slasher plot, Happy Death Day 2 U views it as an almost total irrelevance. Instead of exploring the slasher, director Christopher Landon (who also assumes writing duties from Scott Lobdell) leans more heavily on comedy sci-fi and finds a surprising streak of emotion which was missing from the first film. For the most part, this plays into all the strengths of the original and even the slasher plot finds a more interesting way to make use of what was previously an annoyingly obvious red herring. Jessica Rothe’s charisma bomb of a performance is an absolute joy. When, in the sequence that most directly nods to Back to the Future Part 2, she first she is back in the same day she died so many times to survive, her frustration and annoyance at once again being back to square one is hysterical and the mid-movie death montage (the highlight being a bikini-clad Tree flipping off the camera) is likely to be one of the funniest sequences you’ll see in a horror movie this year. This time though there is a little more for Rothe to play. The element of Tree’s mother felt like little more than standard-issue tragic backstory in the first film, but here it becomes the crux of an affecting choice the character must make. Rothe plays this very well, making Tree much more of a three-dimensional figure this time.

There are misfires. The film takes a little while to get going, and the sidelining of all of the Asian characters into the science lab after the twenty- minute mark is a disappointing lean in to stereotyping. The increased emphasis on the comedy largely works, but one woeful sequence with a side character having to pretend to be blind is the epitome of trying too hard for a laugh and never getting it.

Happy Death Day 2 U isn’t a classic, but it’s a better, more consistent, and more complete film than the first. Unlike Scream and the slashers and slasher sequels of its era, this film doesn’t seek to interrogate the genre(s) it fits into, instead it plays with and tweaks them, usually to amusing effect.
★★★

Instant Family
Dir: Sean Anders
Mark Wahlberg and Rose Byrne play Pete and Ellie, who have been putting off having a family. After Ellie jokingly suggests it, she looks into adoption and soon they are completing the training to become foster parents. They end up fostering not one child but three siblings; Lizzy (Isabella Moner) and her younger brother and sister Juan and Lita (Gustavo Quiroz and Julianna Gamiz). As you might imagine, things don’t always run smoothly.

Sean Anders’ directorial resume – which features sub-average teen comedy Sex Drive, Adam Sandler vehicle That’s My Boy and both Daddy’s Home films – doesn’t exactly scream nuanced emotional storytelling (or, for that matter, laughs) and even without knowing his track record, I didn’t go into Instant Family expecting much. I was pleasantly surprised. While the film definitely accents its comedy, with Pete and Ellie’s group of fellow foster parents and the group leaders played by Octavia Spencer and a wonderfully dry Tig Notaro supplying many laughs, it always seeks to combine those moments with a credible story about the making of a new family.

The script is good, but the credibility of the story is built on the fact that we believe in Wahlberg and Byrne as a couple. Their marriage feels real; neither all sunshine and roses nor horribly troubled, just two people getting through together day by day. The chemistry between them makes for a solid foundation and when it’s disrupted by the sudden addition of children we buy into their moments of shared happiness and those in which the pressures make them fractious with each other or the kids. This also plays into the comedy. There are few set pieces that strain credulity (the two of them confronting a kid they think has sent a dick pic to Lizzy), but most of the comedy comes out of moments that feel only slightly heightened and the fact that we recognise the moment allows it to be more than just passingly funny.

The younger kids are cute and funny, but Isabella Moner impresses as a teen whose circumstances have forced her to grow up too quickly in some ways and who is acting out in what seems like a rebellion against that. Moner gives Lizzy some nuance, look at the turn on a dime from rebellious teen to surrogate parent when her younger brother hurts himself and neither the script nor the performance make her process of coming to trust Pete and Ellie easy.

While it’s not one of the most consistently laugh out loud comedies you’ll ever see, Instant Family generally hits the funny bone, but it’s the unexpected emotional depth behind it that makes it worthwhile.
★★★

When Jan (Lynn Holly Johnson), Ellie (Kyle Richards) and their parents (Carroll Baker and David McCallum) move to an old country house for the summer, the girls experience strange events which Jan comes to believe are linked to the disappearance 30 years ago of Karen, the daughter of their landlady Mrs Aylward (Bette Davis).

It’s rare now that we get a proper horror film aimed at kids, but The Watcher in the Woods is certainly that. In the 84 minute version that is available (the original cut was 100 minutes, but only seen at that length by test audiences), the film has no time for teen romance or for snarky comedy, instead it focuses on building atmosphere. Director John Hough uses his camera notably interestingly. From the beginning there is a sense of unease, of an otherworldly presence in the woods, thanks to a prowling camera that is, at times, redolent of what Sam Raimi would do (albeit speeded up) the following year in The Evil Dead. I imagine that if I’d seen this as a child, that crawling presence would have unleashed a gnawing sense of fear.

This frightening atmosphere pervades the whole film. You can feel it in the way that young Ellie often seems , drawn by the presence first to the dog she adopts and names Nerak and the repeatedly to the woods. It’s also in the genuinely haunting glimpses that Jan sees of Karen, particularly in repeated imagery of mirrors, initially when Jan can’t see her own reflection and later in a hall of mirrors where first she and later Karen are endlessly reflected. Again, for kids, this must have been bone chilling. The performances are perhaps a little broad at times, both of their time and of their genre, but Lynn Holly Johnson is an engaging lead and Bette Davis brings shading to a role she could easily have played in a very straightforwardly ‘witchy’ way.

Troubled as the production might have been (with an uncredited Vincent McEveety coming in to do reshoots, particularly on the film’s ending), The Watcher in the Woods feels very much of a piece. It has great atmosphere and still holds up as a truly creepy piece of horror cinema that audiences young and old should discover.
★★★★