By Wyndham Hackett Pain It would all too easy to think of The Wailing as the South Korean version of The Exorcist. There is a lot the two films share in common: an uneasy tone, a worried family, a young child possessed by the devil. Yet The Waling is much darker, more unsettling, and stranger […] 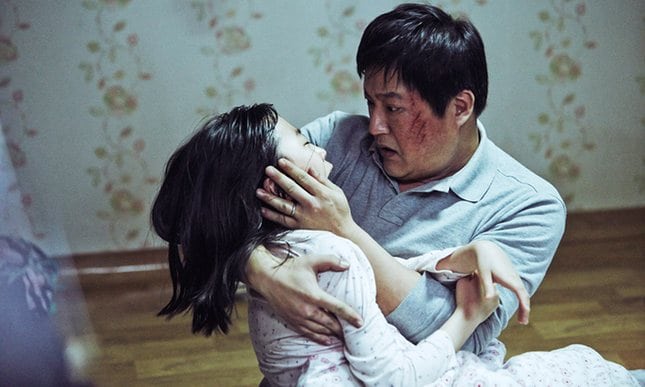 It would all too easy to think of The Wailing as the South Korean version of The Exorcist. There is a lot the two films share in common: an uneasy tone, a worried family, a young child possessed by the devil. Yet The Waling is much darker, more unsettling, and stranger than the 1973 classic which shocked audiences with its depictions of the horrors and evil that could beset American suburbia.

Set in a small rural mountain village, The Wailing tells the story of a community struck by a weird and unexplainable illness that spreads through its inhabitants, and in turn causes equally bizarre and unsettling acts of violence and murder. A clumsy and foolish policeman, whose daughter has been afflicted by the illness, sets out to find the source of these terrors, with the only suspect a Japanese man who recently moved to the area and who lives in the woodland surrounding the village.

Director Na Hong-Jin has gained a reputation for unique visuals and style with previous films The Chaser and The Yellow Sea, and his latest feature is no less uncompromising. With the huge costs required to make even a low budget independent film credit should be given to any director who can create a film that truly represents their vision. Even more credit should be given when the direction is as effective as this.

For all the comparisons that can be made with The Exorcist, Michael Haneke’s The White Ribbon may be a better match, due to a shared obsession with the nature of evil and interest in the unknowable. The unknown envelopes the entire proceedings, as the characters stumble in search of evidence to prove their hunches and blind faith.

There is a mythical feel to the film similar to that of Guillermo del Toro’s Pan’s Labyrinth. This should not be surprising as the script takes inspiration from ancient shamanistic traditions and the beautiful setting within the mountains of South Korean only adds to this otherworldly atmosphere. The willingness of the director to play with convention is refreshing and emphasises how formulaic and unimaginative the drab found footage films we’ve become accustomed to in recent years really are.

The supernatural world depicted is finely constructed and completely believable. The set design, makeup, and visual effects used are incredibly effective and produce a seamless transition between the natural and supernatural, so that the audience are unaware of where the line that usually separates them lies.

I usually get a bit twitchy when a film, like this one, goes past the 2 and a half hour mark, but in this case it is justified as it allows viewers to settle into the mood of the film, which makes the moments of horror and fear all the more disconcerting.

For a film that is so dark The Wailing has a surprising number of comic instants. Though, despite a fair few slapstick jags, a plot this dark is still going to struggle to bring you to laughter, but these moments of light relief are welcome between the images of blood soaked corpses.

While still in the shock from my first viewing, it’s hard to truly know whether this film will thrill and inspire audiences with the same longevity as The Exorcist. All I can say in the meantime is that The Wailing is a well-made and compelling film that will keep you enthralled and perversely entertained for its 156 minute running time.

The Wailing is in Cinemas from Friday 25th November.