By James McAllistair @jamesmca90 As Emma Stone’s Olive Penderghast observed in Easy A, the one thing the movies don’t tell you is “how shitty it feels to be an outcast”. The reality is that kids can be mean, and growing up is no picnic; trying to cement a position for yourself within the social standings of […] 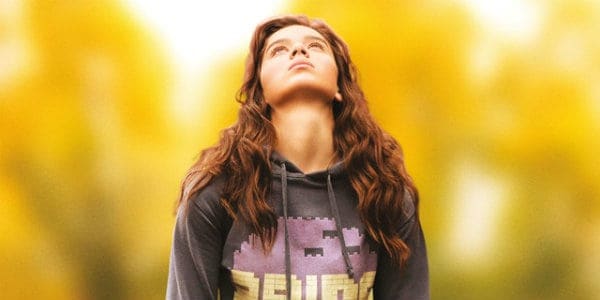 As Emma Stone’s Olive Penderghast observed in Easy A, the one thing the movies don’t tell you is “how shitty it feels to be an outcast”. The reality is that kids can be mean, and growing up is no picnic; trying to cement a position for yourself within the social standings of the schoolyard can leave you anxious, sometimes helpless… and as The Edge of Seventeen – screenwriter Kelly Fremon Craig’s admirable directorial debut – recognises, these fears last long into adolescence.

For self-assertive highschooler Nadine (Hailee Steinfeld), such concerns have long since manifested within her psyche, evolving now, as she finds herself on the brink of adulthood, into aggressive flurries of teenage angst. “There are two types of people in the world,” she tells us early on. “The people who radiate confidence & naturally excel at life, and the people who hope all those people die in a big explosion.”

Darian (Blake Jenner), Nadine’s older brother, falls firmly into the former category, while she resides in the latter. And save for the neglected advances from her classmate Erwin (Hayden Szeto), and the unlikely bond she has developed with her history teacher, Mr. Bruner (Woody Harrelson), the only consistent friendship in Nadine’s life is with Krista (Haley Lu Richardson). Since childhood, they’ve been inseparable, guiding each other through the cruelties – Nadine’s father died when she was 13 – & insecurities of life. But now Krista has begun dating Darian, leading to a rift between the two girls that may be impossible to fix, and has left Nadine feeling lonelier than she ever has before.

Craig has cited John Hughes as a significant influence on her writing, and indeed her film shares a close affinity with the likes of The Breakfast Club & Sixteen Candles. Isolated from her peers, Nadine’s existence becomes a perpetually pressurised milieu of surging hormones and identity crisis. Steinfeld, a talent so often left ill-served in past roles, embodies the self-destructive anxiety effortlessly, but is careful to abate her anger with humour and vulnerability that holds our empathy even when Nadine’s actions frustrate.

Fans of top tier teen comedies will spot numerous parallels with the likes of Clueless and Mean Girls, but The Edge of Seventeen has its own distinctive personality. The emphasis here is on the importance of friendships and forming connections, and there’s a desperate sadness in Nadine’s incapacity to network with others, particularly after she’s dragged to a party with Darian & Krista.

The film’s success lies in its refreshing reliance on nuance; an ability to eschew the diverting onscreen trappings we habitually see employed in lesser examples of the genre. Craig’s direction carries more focus, dispensing even with the obligatory poppy soundtrack, and instead opting for more emotively refined music choices.

A wry, and sometimes even scathingly droll wit is a consistent strength of Craig’s script, but less successful is her attempt to shape the story in a way that shuns convention, and perhaps inevitably, the final act regrettably adheres closely to cliché in order to ensure a tidy ending – even going so far as to avoid a cathartic resolution between the two central characters. For all its intelligence and complexity, it’s just a shame the film never finds the confidence to truly overcome its own insecurities.

Edge of Seventeen is on general release in cinemas from November 30th. Just tweet and follow us at @TLE_Film for a chance to win an Edge Of Seventeen pack including:

A branded hoodie, two wristbands, a LED flashlight for mobile (to create the perfect selfie!), and a compact mirror phone charger. (As pictured above).