By Michael McNulty Mark Cousins’ Stockholm My Love is an exercise in patience. A frustratingly dull film with the pretentions of a film school graduate, who has gorged on likes of filmmakers such as Terrence Malick, then picked up a camera and disappeared down a rabbit hole of contemplation, exploring themes of urbanism, love, loss […] 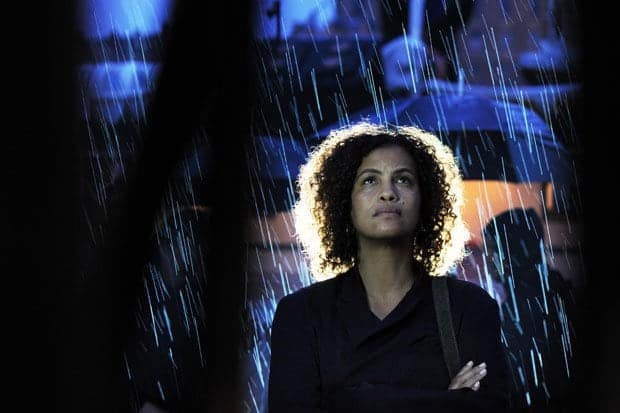 Mark Cousins’ Stockholm My Love is an exercise in patience. A frustratingly dull film with the pretentions of a film school graduate, who has gorged on likes of filmmakers such as Terrence Malick, then picked up a camera and disappeared down a rabbit hole of contemplation, exploring themes of urbanism, love, loss and the human spirit.

Alva (Neneh Cheery), an architect, has been struggling to come to terms with accidently hitting and killing an elderly man with her car a year previously. She is so overwhelmed by the weight of guilt, grief and depression that she blows off work one morning and instead decides to wander around Stockholm marvelling at and seeking solace in the spirit of the city, its people and architecture.

Ultimately this is a love letter to Stockholm and it is clear that Cousins has a deep affinity for the city. The film explores the city, its history, and skims the surface of the immigrant experience. It all feels very self-indulgent and the true character and energy of Stockholm are never quite communicated.

It’s a freewheeling film essay, with a loose structure and fluid progression that’s rather nauseatingly pushed forward by Alva’s voice over (which moves from English to Swedish and then finally written word). It is written, one assumes, to sound like a natural inner monologue, but never does. Alva’s insights and by proxy, Cousins, are superficial and trite and bounce around aimlessly exploring a multitude of tangents.

Stylistically Stockholm My Love manages some minor successes. Cousins approaches the material in a docu-drama fashion with the film existing somewhere in the middle, leaving you wondering whether you are watching fiction or fact. The photography of Stockholm and the imposing concrete structures, on which Alva focuses, captured by cinematographer Christopher Doyle, best known for his work on films such as In the Mood for Love, are beautifully filmed. But, these are undercut by close ups of snails, tree bark, shadows and watery reflections that feel like paint by numbers art shots, presumably meant to enrich the films visual poetry, but are transparent, feel forced and lack substance.

The choice of music is solid, with Cousins making use of a mix that ranges from Benny Anderson (of ABBA), to classical music and original songs written by Neneh Cherry and her husband and collaborator Cameron McVey. They provide a welcome break from the tedious narration and allow the film to enjoy brief moments of beauty.

Fundamentally, Stockholm My Love feels flat and the emotions contrived.