The Other Side of Hope concerns itself with the struggles of two contrasting men who have both left their homes. One is Khlaed (Sherwan Haji), a Syrian asylum seeker who arrives in Helsinki via a dozen other European countries and who hopes to have finally found a new home. The other is Wikström (Sakari Kuosmanen), […] 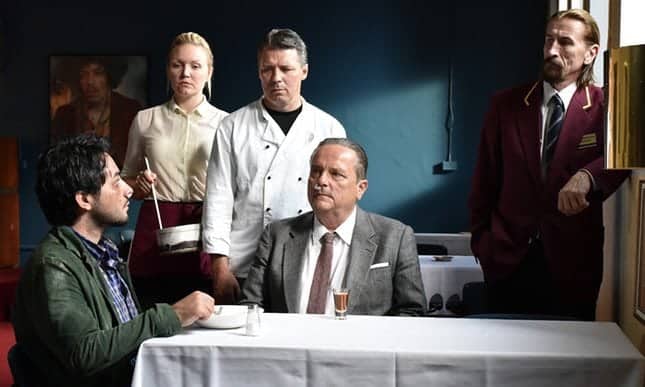 The Other Side of Hope concerns itself with the struggles of two contrasting men who have both left their homes. One is Khlaed (Sherwan Haji), a Syrian asylum seeker who arrives in Helsinki via a dozen other European countries and who hopes to have finally found a new home. The other is Wikström (Sakari Kuosmanen), who leaves his alcoholic wife and life as a shirt salesman, and is soon seen risking his life savings in a poker game. After winning a small fortune he is able to fulfil his dream of owning a restaurant and buys the Golden Pint, a shabby and cobweb ridden venue complete with cigarette smoking chef.

Director Aki Kaurismäki may be best known for his deadpan humour but it is the tenderness and heartfelt sincerity of The Other Side of Hope that really makes it resonate. Despite the bleak overtones the narrative is not as dark as it may at first appear and is warm and empathetic towards its characters. Where many directors like to regularly reinvent there visual and narrative styles, Kaurismäki has spent an entire career mastering his own unique brand of dark comic dramas. What we see in his latest and reportedly his final effort – we’ve heard that before – is a filmmaker who is in full command of his craft and is well aware of where he stands in the cinematic landscape.

The characters in Kaurismäki films tend to be searching for a similar kind of certainty, with the greatest pleasure of all being able to know your place in the world. Khlaed has searched for somewhere to identify with and feel a part of ever since the air strike that destroyed his home and killed most of his family, while Wikström’s decision to stop being a travelling salesman and to own his own restaurant too seem to be driven by a desire to find a sense of place and attachment.

This may seem like an everyday and unsubstantial pursuit but Kaurismäki clearly states the perils and troubles that accompany this search. Wikström risks everything he has at the poker table so that he can buy a restaurant and Khlaed has to flee the asylum officers that want to fly him back to Syria in order to escape being sent back to the country whose turmoil led to the death of those he loved. All the while national and international law have meant that he has gone from being a refugee to a criminal.

As much as The Other Side of Hope relates to current social issues it also exists in its own world and as the viewer you never question how it is constructed. There is a brilliant internal logic that holds everything together even when it appears absurd. For long-time fans of Kaurismäki’s work there will be will be no stylistic surprises, as there is a similar retro and stripped back feel that has accompanied his films for decades. Watching The Other Side of Hope is instead more like observing the moulding, if not completion, of the director’s cinematic philosophy.

If this is to be director Aki Kaurismäki’s last film then The Other Side of Hope is a fitting final feature that contains the deadpan humour, exploration of social issues, and genuine empathy, which have made him one of the most celebrated European directors of the last 30 years. This is a brilliant endnote to mark an extraordinary career.