By Corrina Antrobus, film reviewer @corrinacorrina Paul King’s theatrical adaptation of Michael Bond’s 1985 Paddington is not just a teddy bear’s picnic, it’s a big warm bear hug to London as a melting-pot. However you can banish any fears of saccharine soaked naffness. It obviates tokenism with its insistence on painting our capital with kaleidoscope colours […]

Paul King’s theatrical adaptation of Michael Bond’s 1985 Paddington is not just a teddy bear’s picnic, it’s a big warm bear hug to London as a melting-pot. However you can banish any fears of saccharine soaked naffness. It obviates tokenism with its insistence on painting our capital with kaleidoscope colours and fond cultural salutes; Mum wears African prints, daughter is bilingual and the nautical nods from dad and Mrs Bird can’t be a coincidence.

Director and writer Paul King and Michael Bond rubbish the charge that this is a facetious jab at xenophobic Ukip claiming ‘It’s not about visa status, it’s about kindness’. They confess their love letter is more to London than the UK after being inspired by the remarkable generosity and spirit experienced during the 2012 Olympics which was in full swing at the time of production.

Our introduction to Paddington once named *insert bear growl here*, begins in black and white, once upon a time in ‘Darkest Peru’. Explorer Montgomery Clyde (Tim Downie), discovers a sloth of bears who become hospitable after a peace offering gift of marmalade and elocution lessons. After a chummy spell, Montgomery bids the bears farewell with an invite to London as a parting platitude, something our young talking bear takes up after a natural disaster renders him homeless. Paddington’s fantasies of London being a welcoming island with streets paved with marmalade, are swiftly severed when he arrives to a cold climate and a frosty reception. That is until he meets the Browns…

After the hesitations of the fastidious Mr Brown (Hugh Bonnerville), are quelled by the compassions of Mrs Brown (Sally Hawkins), Paddington (Ben Whishaw), heads to his temporary home where hilarity ensues from his alien credentials.

Everyday tourist dilemmas such as navigating the Underground and someone else’s bathroom prove humorously tricky, but it’s the social norms and lack of manners that are most difficult to get his little head around. During these hurdles we witness Paddington at his most calamitous and really see the animated majesty put to work.

The armies of people responsible for making this bear as realistic as possible take up seven minutes of the credits and it pays off handsomely. Technically, it has the zest of a shred of marmalade and we’re frequently reminded of the excellent craft work with its recurring intimate shots. Talking of intimate, Paddington’s controversial PG rating thanks to ‘mild sexual innuendo’ is laughable. If anything, it proves we Brits are still stuffy at heart – something of a theme in the film itself.

Ben Whishaw’s doleful dialect gives us a tender Paddington, something the originally cast (and perhaps too obvious) Colin Firth may have struggled with. To Firth’s credit, he was the first to acknowledge the mis-match, and after tinkering with the octaves resulting in ‘something Smuf-like’, they surrendered to Whishaw with the conclusion he sounded more appropriately ‘other’.

Institutional comic heros pepper the cast of cameos, and a casting triumph is the steely Nicole Kidman as Millicent – the cruel taxidermist who wants Paddington to get stuffed. The thankless flirtations towards this Cruella de Ville from Mr Curry (Peter Capaldi), are an additional string of enjoyment and a well of belly laughs. Kidman signed-up the day after reading the script despite her agent initially telling director Paul King ‘it’s never going to happen’.

Paddington loyalists will find little to be disappointed with and those new to the duffle-coated bear will find a new friend in the fuzzy nomad. Although the narrative remains in the canon of the book, it isn’t shackled to the 1958 tale giving it ample wiggle room for a tempting sequel.

With the warm welcome this warm and fuzzy film is receiving, something suggests this won’t be Paddington’s final stop. 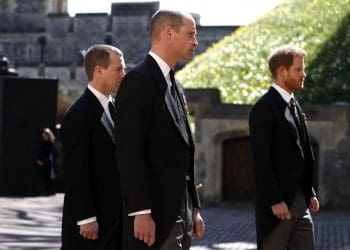