By Leslie Byron Pitt The output of Platinum Dunes can often be considered questionable trash. The film company either offers shiny, toothless, re-treads of horrors gone by, or, with the matter of the purge series, they deliver tight yet awkward b-movies which could offer more if finely tuned. Ouija: Origin of Evil falls into the […] 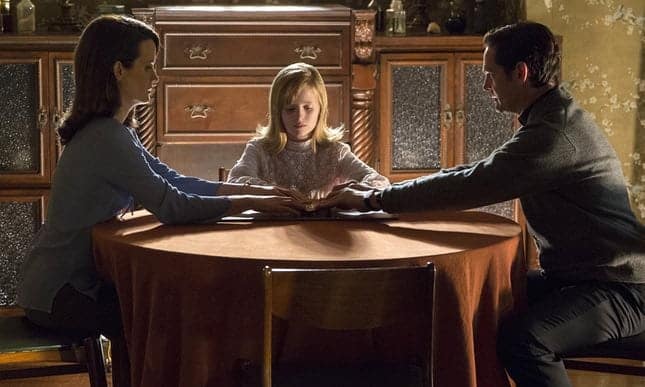 The output of Platinum Dunes can often be considered questionable trash. The film company either offers shiny, toothless, re-treads of horrors gone by, or, with the matter of the purge series, they deliver tight yet awkward b-movies which could offer more if finely tuned. Ouija: Origin of Evil falls into the latter category. A contrived but enjoyable possession prequel, which builds greatly upon the sloppy first feature released in 2014.

Set 50 years before the original film, the film focuses on widowed spiritual medium Alice (Elizabeth Reaser), whose is struggling to raise her two children on her séance swindles. Still troubled by the sudden death of her father, the oldest daughter; Lina (Annalise Basso), convinces her mother to incorporate the popular Ouija board game to her readings to help provide more peace of mind to those who have lost a loved one. Alice obliges the idea, but unwittingly invites contact with a malevolent spirit, who preys upon the family’s younger daughter Doris (Lulu Wilson).

The original Ouija film struggled to find any sort of balance between delivering decent scares or providing an engaging story. In hiring horror director Mike Flanagan for the second entry, Origin of Evil fares far better in both cases. Ouija becomes more effective, simply because Flanagan is a lover of the form. It’s true that the first film’s surprisingly box office success has allowed its successor to be made at a higher budget, but it’s worth noting that now we have a director who wishes to put its economic good fortune to good use.

This Ouija has decent lighting arrangements, creepy visual compositions and a clearer focus on characterisation and narrative. Although it’s best not to worry too much about the bonkers ending. Flanagan takes a flimsy premise (the films are based on the Hasbro board game) and moulds it into something more tangible. It’s a pity that Ouija borrows so liberally from the granddaddy of possession films, The Exorcist (1973), to make anything out of this second entry. Originality is not Origins of Evil’s strong point and while this is a far more entertaining feature than its predecessor, it can’t help but feel like a hand me down from bigger and better films.

This is not to say that Flanagan doesn’t have fun with in giving us a movie which brings back film “cigarette burns” as creepy motifs or providing us with a female family unit with agency and a solid emotional core. Just don’t expect a supernatural masterpiece.

Extra: The disc gives us a decent load of extras including deleted scenes, a feature commentary and some fluffy behind the scenes docs. While expecting something as in-depth as some of the more boutique horror releases may be asking for too much, it’s great to see Universal give us a secondary reason to buy the disc, despite the falling interest in extras.