By Linda Marric @linda_marric Directed by Josh Gordon and Will Speck, Office Christmas Party sees the return of a pairing responsible for some of the highest-grossing comedies of the last few years. Fresh from starring in the rather disappointing sequel of Horrible Bosses, Jennifer Aniston and Jason Bateman are back for more awkward gross-out moments […] 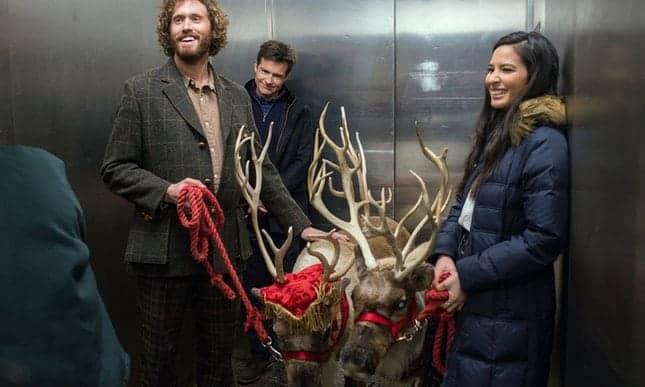 Directed by Josh Gordon and Will Speck, Office Christmas Party sees the return of a pairing responsible for some of the highest-grossing comedies of the last few years. Fresh from starring in the rather disappointing sequel of Horrible Bosses, Jennifer Aniston and Jason Bateman are back for more awkward gross-out moments and silly shenanigans. Also starring in the film is TJ Miller of Silicon Valley fame, and Saturday Night Live’s Kate McKinnon.

Clay (TJ Miller) manages a failing branch of a company he part-owns with his uptight CEO sister Carol (Aniston). The pair have been at loggerheads for years, but now Carol has decided to call time on her brother’s branch as it is failing to meet its quotas. Carol turns up at the office unannounced and threatens to start firing people unless Clay can prove he can do better. “Hilarity” ensues when Clay decides to throw the mother of all office parties in order to entice an important client onboard and, by some Christmas miracle, save the company from his sister’s plans. Aniston, sadly delivers the same comedic schtick as in Horrible Bosses, a bitchy ball-beaker who doesn’t believe in fairytale endings and who has very little time for her loser brother.

Jason Bateman is Josh Parker, a recently divorced supervisor in Clay’s firm whose “will they won’t they?” relationship with Olivia Munn’s character fails to hit the right note. Both Bateman and Munn are let down by a screenplay which cannot quite decide who the main protagonists are and ends up with too many storylines all crammed into a shambolic 104 minutes. However, stealing the show with impeccable and fearless comedic timing is Kate McKinnon. McKinnon’s recent stint on Saturday Night Live as Hillary Clinton made her an overnight global sensation, and i is sure to catapult her all the way up to the top of the Hollywood comedy tree, where she will hopefully no longer have to play second fiddle to better known, but less talented actors.

Office Christmas Party fails to deliver on all accounts; the laughs are often followed by groans thanks to the ludicrous narrative arc and the frankly laughable denouement. On the whole, the film fails to score many comedic points, it does however manage to raise a few laughs as a result of some gross-out moments.

The film is on general release from Wednesday December 7th December.