By Linda Marric @Linda_Marric Moana is the latest big-budget holiday season animation from the team responsible for Disney’s continued renaissance. Directed by John Musker and Ron Clements, who gave us the timeless Aladdin and The Little Mermaid, this charming and engaging adventure has an empowering, life-affirming message with a subject matter that will withstand the […] 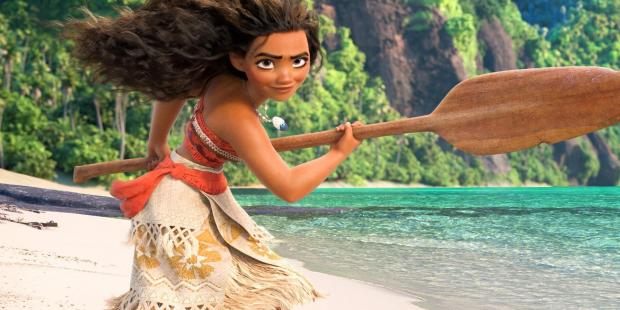 Moana is the latest big-budget holiday season animation from the team responsible for Disney’s continued renaissance. Directed by John Musker and Ron Clements, who gave us the timeless Aladdin and The Little Mermaid, this charming and engaging adventure has an empowering, life-affirming message with a subject matter that will withstand the test of time.

Voiced by Hawaiian actress Auli’i Cravalho, Moana is the daughter of a Pacific Islands chieftain who goes on the quest of a lifetime to save her island and its people. Moana must find Maui (voiced by Dwayne Johnson), a demigod responsible for stealing the heart of Te Fiti, creator of all islands, and bringing a darkness onto the world which will destroy everything in its way unless the heart is restored to its rightful owner. So far, so classic Disney princess story. Despite Moana’s very vocal protestations that she is in no way a princess, Maui points out that if you wear a dress and have a cute animal sidekick, you are definitely a princess. Moana’s journey of self-discovery takes her beyond the shores of her sheltered life, her father’s disapproval of her sense of adventure does not deter her one bit from it.

Where Moana differs from classic princess stories is the lack of a love interest; despite being surrounded by male characters, Moana is allowed to just be a young girl who doesn’t need to be validated by the company she keeps. True, her relationship with Maui progresses from complete and utter disdain, which finally turns into a beautiful friendship, but the lack of romance in the story allows space for far more valid points to be made. What is interesting about Moana is that the crux of the story isn’t just that “girls can do it better”, but at the heart of the narrative is a commendable environmental message. As well as keeping with the traditional Disney format of adventure and “triumph of good over evil”, there is an interesting modern touch to the film which makes Moana into the first of its kind. Despite the studio running into hot water with some groups for its depiction of Polynesian men as stereotypically overweight, the controversy doesn’t seem to have dented the film’s reputation. It is however important to understand that mistakes can still be made even with the best intentions in mind.

With an inspired soundtrack courtesy of a collaboration between Lin-Manuel Miranda of Hamilton fame and Disney’s own Mark Mancina, Moana offers a beautiful mix of catchy tunes and more authentic Pacific Islands sound. It is also worth mentioning the great cast lead by Dwayne Johnson in a brilliantly self-deprecating performance aided by a great dialogue and laugh-out-loud moments for younger audience members and adults alike, all while avoiding the recent “this one is for the parents” tropes. In the whole, Moana is a classic Disney adventure with a different twist. Its message of love and courage is sure to resonate with the viewing public and deserves all the accolades it is sure to get come awards season.

Moana is in cinemas from Friday December 2nd.