By James McAllister “Our system is rotten. It doesn’t reward honest politicians who vote with their conscious; it rewards rats, who are willing to sell out their country to keep their noses in the trough.” Miss Sloane may have been made back in early 2016, when the prospect of a Donald Trump presidency was more […] 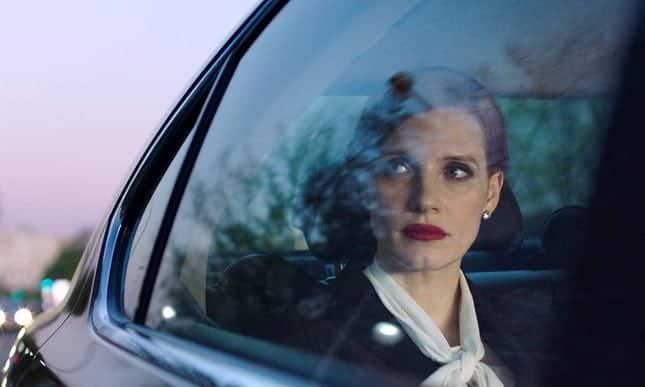 “Our system is rotten. It doesn’t reward honest politicians who vote with their conscious; it rewards rats, who are willing to sell out their country to keep their noses in the trough.” Miss Sloane may have been made back in early 2016, when the prospect of a Donald Trump presidency was more an outlandish nightmare than a chilling reality, but some 15 months on, its release could not be timelier.

In a new era of ignorance, here is an edgy political thriller that’s motivated by intelligence. We may recognise the contours of similar works – Tony Gilroy’s Michael Clayton is a perceptible influence – but John Madden’s film, perhaps his best to date, defiantly bends the rules to get its message across.

It’s a mentality that’s shared by the eponymous Elizabeth Sloane (Jessica Chastain), a cutthroat lobbyist working on Capitol Hill. Her unyielding resolve to influence legislation at the behest of her clients has made her one of the most highly sought-after power brokers operating in Washington D.C., but now it may be about to land her in hot water with a congressional committee led by John Lithgow’s sharp-tongued senator.

Sloane finds herself under investigation having been accused by her previous employer, Cole Kravitz & Waterman, of violating Senate ethics rules. Three months prior, Sloane’s boss George Dupont (Sam Waterston) approached her for help in opposing the proposed Heaton-Harris bill, which would enforce tougher background checks on all firearm purchases made within the United States. However, having subsequently been asked by Rodolfo Schmidt (Mark Strong), the head of rival lobbying outfit Peterson Wyatt, to instead lead his efforts in support of the measure, Sloane abandoned Dupont & his team. And having become so robustly consumed by her resolve to win, her former firm has now sought to conspire against her by gathering evidence that could ruin her reputation, and thusly destroy her career.

Chastain meticulously spikes her characterisation of Slone with a calculating ferocity. She’s a smart, cold & cunning presence – a cobra operating within a nest of vipers. Performances from the greater ensemble may be equally as solid – Gugu Mbatha-Raw and David Wilson Barnes are both notable standouts – but Madden tailors his cast to ensure that they never undermine the film’s focus on his ruthlessly determined heroine.

Though Jonathan Perera’s Sorkin-esc dialogue is occasionally overwhelming, the world in which Sloane operates – illustrated through crisp, icy compositions by cinematographer Sebastian Blenkov – is painfully simple to understand. This is a cruel environment that’s primarily dominated by dishonest alpha males, and there’s a great underlying sadness in Elizabeth’s need to stoically conform. As Christine Baranski’s waspish feminist observes with a pointed scorn, the only thing she [Sloane] is missing “is a dick”. Her eyes prickle with an uncompromising authority that she clearly relishes, but at times we see that they belie an undertone of loneliness that manifests deep within her psyche.

Crucially, never does Madden see the need to candidly appraise Sloane’s career choices – she is not the problem here. While Miss Sloane begun life as a film about the suppression faced by those who take on America’s all-powerful gun lobby, it’s far more pertinent to today’s politics as a bruising diatribe against the gender disparity that we see to be rife not only within the American institution, but across the globe; a system swamped by those who are deceitful & dishonest. As Sloane concludes with cutting venom, “these rats are the real parasites on American democracy.”

Miss Sloane is in cinemas from Friday 12th May.