★★★☆☆ The fourth instalment in the iconic Men In Black franchise sees Liam Neeson and Chris Hemsworth joined by Hemsworth’s Thor: Ragnarok and Avengers co star Tessa Thompson in a sequel which isn’t half as bad as many would have expected it be.  Directed by F. Gary Gray and written by Matt Holloway and Art […] 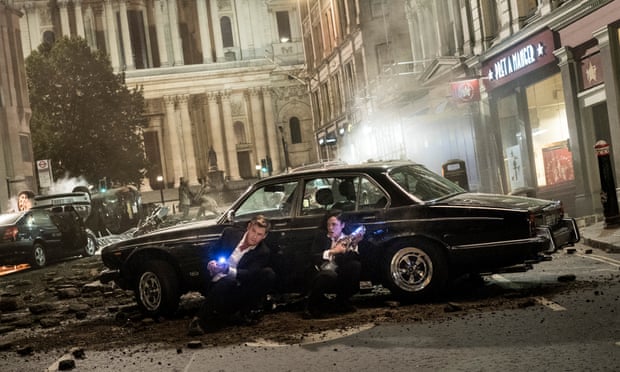 The fourth instalment in the iconic Men In Black franchise sees Liam Neeson and Chris Hemsworth joined by Hemsworth’s Thor: Ragnarok and Avengers co star Tessa Thompson in a sequel which isn’t half as bad as many would have expected it be.  Directed by F. Gary Gray and written by Matt Holloway and Art Marcum, Men In Black: International also stars Rebecca Ferguson (The Greatest Showman), Rafe Spall (Shaun Of The Dead) and the voice of Kumail Nanjiani (Silicon Valley, The Big Sick) as adorable alien creature Pawny.

After years of tirelessly attempting to track down the special government branch which erased her parents memories of a bizarre alien encounter, Holy finally finds and infiltrates their base with the hope of finding some answers. After much pleading, Molly (now agent M) is given a chance to prove herself by Agent O (Emma Thompson) who sends her on an important mission to London where branch boss High T (Liam Neeson) pairs her off with the handsome Agent H (Chris Hemsworth).

Amidst bickering with jealous work rival Agent C (Spall), and trying to avoid the wrath of an angry former lover (Rebecca Ferguson), H soon realises that there is far more to M than meets the eye when she lends him a hand whilst fighting an alien entity which killed one of his oldest friends. Faced with an imminent alien attack, the duo must do all they can to tackle their biggest threat: a mole in The Men in Black.

Former music video director F. Gary Gray offers an entreating, if deeply flawed film which sadly fails to measure up to its predecessors. This is not to say that the film in itself isn’t somewhat entertaining. The CGI action is, unsurprisingly, as big and and as impressive as it’s ever been, but there is a definite lack of direction in the narrative which sadly lets the side down.

Elevated by its cast brilliant chemistry and by Tessa Thompson’s enthusiasm for the role, the film does pick up in the second half and in the end you’ll find yourself suitably entertained even if most of the gags are left to Nanjiani to deliver.

Overall, Men In Black International does the minimum of what it set out to do, which isn’t all bad. Flawed, by hugely entertaining.