By Ellery Nick @Ellery_Nick Lake Bell stars alongside Simon Pegg in another offering from the Big Talk production team. Directed by Ben Palmer of The Inbetweeners, Man Up tells the story of a middle aged woman who, despairing of her own inability to climb out of middle aged singledom, is charmed by a chance encounter […] 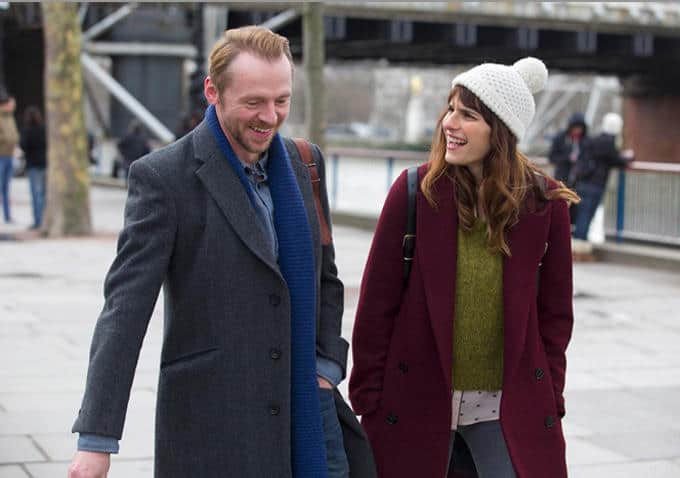 Lake Bell stars alongside Simon Pegg in another offering from the Big Talk production team. Directed by Ben Palmer of The Inbetweeners, Man Up tells the story of a middle aged woman who, despairing of her own inability to climb out of middle aged singledom, is charmed by a chance encounter and decides to give the assent one more try.

So commences what we’d expect from a Simon Pegg film: characters that tell apologetic and abortive jokes, giving them a sort of fumbling British decency. If there are any signs that this form of delivery is getting tired, its humour holds for now. Pegg remains funny and crucially, very likable.

As is Lake Bell’s Nancy, who is instantly recognisable as a thwarted but wonderful mid-thirty year old stuck in a rut. We all know a Nancy, someone who is charismatic, but can become tongue-tied and betrayed by the humour that defines her most. Her sympathetic nature is by far the film’s most effective tool and it was just when I was beginning to root for her that she turned into someone else. In a blink Nancy was indifferent to the opinions of others, capable of holding an audience with elaborate verbose speeches, confidently announcing the flaws of those around her. Undoubtedly these dual behaviours can surface in the same person, but here it was a stretch too far and left the character seeming confused. It was like watching a musical. There were moments when I felt real pathos for Nancy and her self-imposed struggle, and then she would break out into a little jazzy number.

Man Up, it seems, has two films inside of it wrestling over the screen. This is also apparent in the supporting cast members – Rory Kinnear (Skyfall) and Ophelia Lovibond (Nowhere Boy). They both give good, but highly exaggerated performances. Rory’s Sean is an unabashed pervert, a near unbelievably silly man who reaches from under a toilet cubical to grab an ankle before reclining back and flinging out a hand to flaunt his exposed body. Which is fine, except that later, in another cubical, we have Pegg’s Jack, weeping at the marriage he is yet to put behind him and swapping a more observational kind of comedy with Nancy. Talking about what it’s like. What it’s really like. Forget about all that stuff people say. It’s not like that at all. Not really. It’s like this. Sort of. But then I am a loser so how would I know? Come on, shape up. We’re not getting any younger!

Similarly, Jessica, played by Ophelia Lovibond, is in many ways an expertly told joke. Her clothes are from the forties, her head angles in mechanical confusion whenever someone tries to make her laugh. She is the life-size progeny of those ironic postcards you get depicting housewives who say the darndest things, and are unexpectedly alcoholic. But in a film that wants to delve under the vale of middle aged dating and the need for hope in the face of cynicism, it was jarring to find such unsophisticated creatures lurking beneath.

Talking of which, whilst those mentioned above gave disparate but strong performances, the remaining cast were less convincing. What I’d give to stand next to a nice Jonathan Hannah. Me and him at a party, glass of bubbly in hand, both of us slightly pissed and swaying as we listened to an overlong speech. Or Kristin Scott Thomas, yawning and whispering belittling seductions out of the corner of her mouth. Either would do, but Man Up was at times like watching an extended Eastenders Christmas special, which, for charitable reasons, had cameos from Simon Pegg, Rory Kinnear and the bloke from Rebus. At any moment I expected Daniel Craig to appear with a tux and an apron, complaining to Q in his earpiece that the turkey was overcooked.

Elsewhere the jokes have been funnier and the sentiment more warming and while not all the folk in Man Up are playing for the same team, their individual performances are entertaining and the final scenes rousing enough to make it all worthwhile.

Man Up is in cinemas from May 29th.