by Daniel Theophanous
in Film 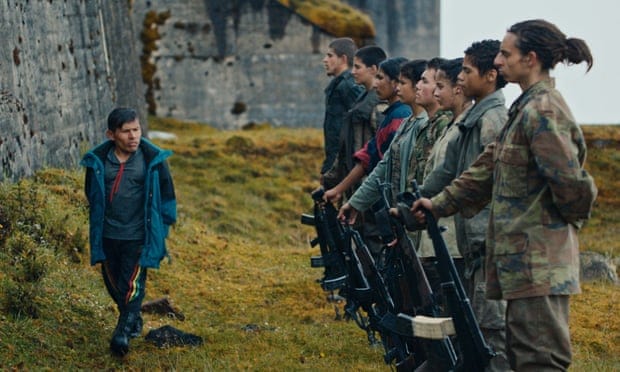 Dropped bang in the centre of a remote undisclosed Latin American mountain terrain, we find a gang of feral youths partaking in a peculiar fusion of intense military training by day and feverish debauchery by night.

What at first appears like an ad-hoc, back-to-basics, delinquent boot camp amidst a glorious background of thick white mist, under the commands of a deadpan short muscular dictatorial figure, turns out to be the real deal when the eventual realisation that one of them is actually a hostage, an American woman, refer to as Doctora (Julian Nicholson).

Columbian director Alejando Landes isn’t too preoccupied with background information, focused very much in the present moment, only giving vague hints that these kids are likely troubled. They are vulnerable enough to be recruited into some questionable cause, a guerrilla operation called the Organisation, whose motives are never fully disclosed. The soldiers stave off their boredom, perpetually waiting around for instructions from the radio, their only communication with the outside world, by engaging in a combination of rough play, camp fires and fooling around with each other.

Various members unreservedly exhibit signs of fluid sexuality and gender ambiguity. It’s not until one of the appointed leader commits suicide that tensions rise, even more so when the squad is then marshalled to a new location, the depths off the Amazonian rainforest. Soon enough, new hierarchical structures form, members start to stray, and a bold decision is made to break away from Organisation. The Doctora now afraid of her fate, schemes her way to escape.

The plot is heavily reminiscent of the Lord of The Flies with a touch of Larry Clark’s Kids; mostly in the depiction of care-free adolescences running amok, becoming threatening, but also in the natural formation of hierarchies within the group, the way the more dominant personality resorts to violence and manipulation in a bid to gain control. Visually the film has been aligned to Apocalypse Now, possibly in these magnificent stylized scenes where privates engaged with practices which utilize the flora and fauna of the jungle to camouflage and ambush.

The film’s success is attributed as much to the aggressive behaviour of these radicalised teens but also the pictorial magnificence of the pervasive forces of the elements around them; inciting within the observer a sense of unease and urgency; yet simultaneously you are compelled to know where it’s all going to end up. It’s an experiential viewing the way in which events unfold in pulsating rhythms, the camera is in continuous motion, cutting to rich montages of expansive spaces and the uninterrupted kinesis of the wildlife, owed to the cinematography of Jaspar Wolf, all interconnected with the loud, gritty and penetrating musical score (by Mica Levi).  Monos is an absolute gem, an effervescent, adrenaline-fuelled visual feast. I cannot praise this film enough.