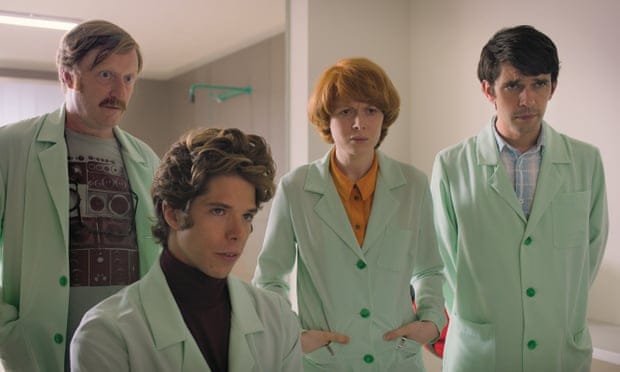 Emily Beecham’s Alice is a divorcee living with her young son Joe (Kit Connor). A botanist by trade, she a total workaholic. After slaving away for months in the lab along with her colleague Chris (Ben Whishaw) they successfully produce a plant species, a sterile spiky crimson flower designed to induce happiness.

Alice name the flower Little Joe after her son, smuggling home a sample for him to have. The plant starts to exhibit sinister intentions, almost otherworldly, possessing a psychotropic side-effect of purposefully altering the psychology of those who breathe in its pollen. Soon enough everyone in the lab, apart from Alice, has inhaled the pollen, including her son, and starts to behave in a curious manner.

Director Jessica Hausner may have taken her cues from horror classic Day of the Triffids, although Little Joe is nothing as outlandish as large plants determined to kill humankind.

Visually and narratively Little Joe can echo a Wes Anderson movie but given a clinical, Scandi-like minimalist twist as well as quasi-dystopian feel of Black Mirror episode. All references inferred by Hausner’s quirky if artistically pleasing directorial choices gel with the film’s unhurried pace, characters in a permanently perplexed state, their monochromatic wardrobe as well as the clean and orderly interior and exterior architectural settings.

The actors’ deliveries often appear stilted, which granted compliments the film’s subdued aesthetics, yet the lack of any dramatics doesn’t always work. Whishaw feels under used, his Chris is rather lifeless, almost unnoticeable

This being said, the performance by Kerry Fox as Bella is a film highlight; along with her shaggy dog, Fox’s confused hippy lab assistant is the only messy thing about the film. Beecham’s Alice is impeccably turned out in every scene, her character is always working with the confines of restraint. When she is the only one yet to inhale the pollen, finally getting on board with Bella’s conspiracy theory a little too late, her paranoia and subsequent reactions feel rather muted and expression-less, thus any modicum of suspense and drama is drained away, as events start to feel rather flat and monotone.

Little Joe is an acquired taste with its eccentric if sophisticated form, peculiar plot and intentionally wooden acting. It’s likely to appeal to certain audience who welcome the wacky and weird. Hausner’s stylish understated thriller is actually more of a accidental comedy at its heart, with strong social commentary of the world we live in, medicated into silence and subservience.