As part for the BFI’s London Film Festival, The London Economic had the chance to catch up with directors Tyler Nilson and Michael Schwartz to talk to us about their upcoming film The Peanut Butter Falcon. 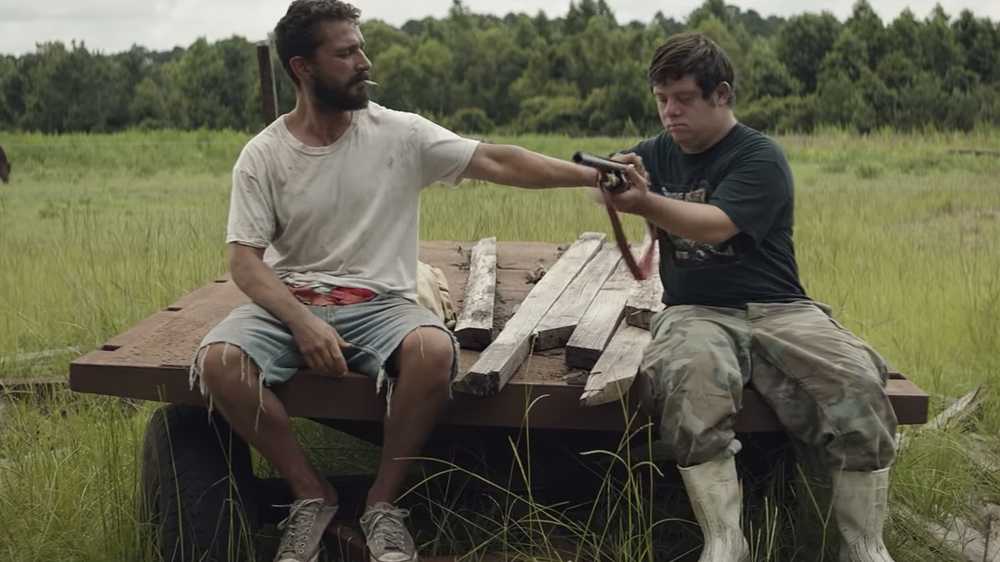 As part for the BFI’s London Film Festival, The London Economic had the chance to catch up with directors Tyler Nilson and Michael Schwartz to talk to us about their upcoming film The Peanut Butter Falcon. The film is being screened at this year’s festival and will be on general release in the UK this Friday 18 th October. A road movie of sorts set in the North Carolina,where a young adult with Down Syndrome Zak (Zach Gottsagen) dreams of becoming aprofessional wrestler. Read our review here.

Congratulations on your movie. For a debut feature your film has receive a lot attention. How do you feel?

Tyler Nilson: Thank you. I mean we worked on this film for five years. It doesn’t necessarily feel like a debut anymore. But we are both very happy. I feel like a film our size and stature, which would usually disappear, has gotten a lot of attention. I think it’s a real gift to sit in a room and someone wanting to talk to us about our film. We are a word-of-mouth film. It’s now in its ninth week in the US, in 700 theatres, it was 1500 theatres at its peak. And of course, it is released here next week.

I understand you work together as a writing and directing duo. How do you share that space?

Nilson: For me I chose a partner who is better than me in most things. I really trust Mike. I don’t have any diva moments.

Michael Schwartz: The positive way of saying that is: singular vision. Tyler and I, when we write we are already doing the directing. We are thinking: what will it look like? We might sit on a sentence for an hour. Looking for words to describe say…. the water slapping on the wood of a makeshift boat. Things like that. So, when we get to set, we’ve already talked about things that we might have different views on. It’s actually really easy. And I trust

Tyler. When you’re on set, there is so much happening at any given time, so to have twice as many hands it’s like a superpower.

People say that the film has connected with them emotionally and tonally. I think Tyler has a gift for tone. Tyler could go and connect with Zach and Shia (LaBeouf) and tell them what the scene should feel like. And then I’m over here talking with Dakota (Johnson), about the angles and what this scene should look like. And then we switch. So, with two of us we have more time, through being able to rotate around. So, in a way our 24-hr shoot day, is a 48-hr shoot day.

Nilson: Having two directors, is something more common abroad. Like Latin America.

Schwartz: But also, common here. Like, the Coen Brothers, the Duffer Brothers, or the Safdie brothers.

You mentioned in previous interviews, that the filming was arduous. Can you explain how?

Schwartz: Everything was a challenge, when you care a lot. Not just Michael and I, but also Shia (LaBeouf), Dakota (Johnson), the DP, the whole cast and crew, everyone cared a lot for the film. And when you are out there in the heat. I don’t know if you’ve been to Georgia in the summer, it’s a hundred degrees. It’s humid. There are bugs everywhere. You are shooting a movie which you need 40 days to realistically complete but have to do it in 30. It’s a huge challenge.

Nilson: And it’s all, mostly, filming in exteriors. Sometimes with thunder and rain, every hour, on the hour. We had a lead actor with Down Syndrome, which we had to approach very differently. We weren’t able to move as fast, but in hindsight that allowed us to calculate our moves better. There were a lot of elements to this film that weren’t simple. It wasn’t like a single location horror film with a beautiful blonde actress about to get killed or whatever. It was an undertaking to say the least.

Many times, in the film the camera cuts to these expansive aesthetically pleasing nature montages. What was the use of those?

Nilson: When we were writing we wanted to use nature as a third character. We also wanted to capture an Americana feel. We wanted to play with these wide anamorphic lenses. To get a sense of a western but doing it in the south. Like Tom Sawyer or Huckleberry Finn. Also, Mike and I are very outdoorsy guys. We spent a lot of time, writing and creating outside so, that just bled over when we write things.

Schwartz: Exactly. Things like swinging from rope then dropping into the water. Walking through a cornfield. That appeals to us. Also, in terms of this film, we wanted it to feel dusty. In the same way that a western is a little bit dusty. The contrast wasn’t very high. We wanted it to feel all natural…. natural light. A film that you almost have to lean in to see.

I read in an interview that you made this film specifically for Zach. Is that true?

Neilson: That’s not totally true. It’s a combination of factors. We didn’t make the film for Zach specifically.

Schwartz: It was to tell a great story. Zach was getting an opportunity, through us. He was telling us, he wanted to be a movie star and we said it was very challenging, there are not a lot of roles written for people like him. He asked us do you guys want to write and direct and have me in it. He had been studying acting his whole life.

Nilson: When we were directing Zach, and this is where things may have got confused in the press, we were trying to direct his experience. It wasn’t really us. He is a phenomenal actor, but directors have to approach him a little differently. We would play him music on set to suggest a tone or a vibe. We would allow him the space to go off book for a line here and there. We wanted to curate and create an experience for him to do his best work.

Schwartz: And the emotional connectedness. The expression of affection from Dakota and Shia towards Zach was at first off camera and it was very real. That was then transferred to the front of the camera. That’s what we meant by directing the experience. Directing the whole set.

In terms of Zach, were you conscious of how you would represent him having Down Syndrome? Were there any issues?

Schwartz: A couple of things actually. When we were trying to get funding for the movie, producers would tell us they would be willing to give us money, only if we used an abled actor to play Zak. Of course, we said no.

Why would they suggest that?

Schwartz: Typically, it’s how it’s been done. You have Forrest Gump with Tom Hanks. In What’s Eating Gilbert Grape, you had Leonardo DiCaprio. Rain Man had Dustin Hoffman. Rarely,almost never, do you have an actor with that certain disability playing the role. And then forus in the writing process it was important for us, for the character with Down Syndrome tohave goals and frustrations and a full range of emotions and experiences. That’s nottypically done.

I have to say we weren’t overly cautious with how Zak would be represented. But we did talk to people that were experts in their field. Groups such as The Shriver Society, TheGlobal Down Syndrome Foundation, Best Buddies. We talked to people from there,mentioning to them the possibility having scenes of Zach being bullied and things like couldwe use the ‘r’ word. And they were like ‘go ahead’, they told us to represent the hardship,because if we didn’t we wouldn’t be telling an accurate story to the real-life experience ofperson with Down Syndrome.

I was shocked by the fact a person with Down Syndrome is forced to stay in a retirement home. How common is that?

Schwartz: The state of health care in the United States is one that economics have a large impact. If it’s the most affordable place to get 24-hour care and you can’t get it anywhere else in that region, then this kind of thing happens. It is shocking… hence it’s in the movie.

We see Shia, in a softer role that we are usually accustomed to. Also, there has been some press around his friendship with Zach post film. Can you tell us more about that?

Schwartz: The directing that we did was all about creating relationships that were authentic. Creating the space for that. We picked Shia and Zak at the back of truck in prep. We got Shia a job at a crab boat. They tuned into us. Many times, I think Shia moulded the actor from looking at me or Tyler or Zach. Also, we always intended our set to be a relaxed and easy- going environment, where everyone felt comfortable. I did read in interviews that Zach had a big influence on him. I would leave it up to him, how he wants to remember his experience.

Nilson: The character (Tyler) comes from our writing. Even though I think what Shia brought was even better. He took what was written and then added meat to the bones, making it even better than we expected. He found the softness in the character. The film worked for a lot of reasons, one of which Shia chose to represent Tyler like that, a complex, lost person with a soft inner core.

Schwartz: Shia’s delivery was very real. It was different to say, him just coming in and saying the lines. He came in and meant the lines. I think Shia really cared for the role.

With whole film is set in the American South, there is the preconception of the south being a backward place. Was that something you were considering when choosing the setting for your story?

Schwartz: For me, I love the south. It’s beautiful. I also love San Francisco. People make up stories about types or groups of people, that I haven’t found personally to always be true. Our film is about everyone getting along or at least has the possibility to get along. It’s not binary and it’s not political in any way.

We can all love each other, it’s just a simple message. If we get rid of the dressing and the preconceived notions, we can find love in different, if not all places. That’s what is in our film. That is who we are. It would have been easy, to come in and say the south or all southerners are the bad guys, but we wouldn’t do that.

Schwartz: Even the bad guys in the movie, John Hawkes who plays Duncan. He is not a bad guy. He’s just has a different goal, a different perspective.

The Peanut Butter Falcon will be released in UK cinemas from October 18, 2019.