A triptych tale about male fragility occupies Francois Ozon’s new film By the Grace of God, a re-telling of recent real events about child molestation in the Catholic Church. 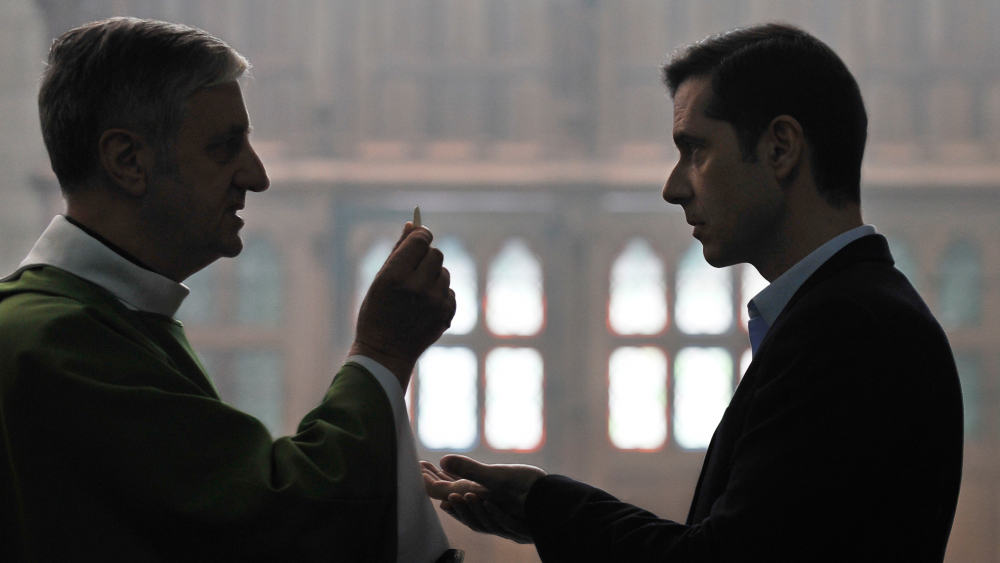 A triptych tale about male fragility occupies Francois Ozon’s new film By the Grace of God, a re-telling of recent real events about child molestation in the Catholic Church.

Screened at this year’s BFI London Film Festival and already a success in France, the film has the director take on a more serious tone than what we are accustomed from him. Daniel Theophanous had the chance to chat to Ozon during the festival to tell us more about his film.

Press reviews have hailed the film as a new direction for you. Would you agree with that?

I really don’t care. Each time I make a film there are different reactions. So, I come to accept any commentary. Of course, it’s different from the last film, but then I don’t ever repeat myself. I try each time to have something new… a new challenge. For this film, I was looking at themes of male fragility. I started reading all these stories on the internet about all these survivors of child molestation. I was very moved by it. I decided to meet some of the victims and to hear their stories.

That’s what struck me most. Looking at these vulnerable men, men at the receiving end of abuse. We don’t see that very often in film or television. And in this specific case, a lot of men may have not come forward at all because they would appear vulnerable or weak.

Of course. Well do still have all the clichés that men have to be strong, less emotional and women are able to have more feelings and sensibilities. However, I do think things are changing, especially with such movements like #metoo. There is more equality between women and men. I think men do want to speak out now. I was very surprised by the frankness of these people. That after twenty years they came out with what happened to them. It’s very difficult if you think about it, as there is no proof. It’s their word against the Church. And they are putting themselves out there, telling others that this thing happened to them.

You were inspired by news articles with this story. Was there a process in creating the background, visually materializing the story?

The process was just telling the story of these men. I didn’t have to change or add much. Sadly, the facts were very rich in information and narrative already. I didn’t have to invent anything. Like for example discovering the wife of Alexandre (Melvil Poupaud) was molested also. This couple exist or found each other because they were victims of paedophilia, the wife from a family member and the husband by a priest. The real facts were strong enough on their own, without me adding anything to it.

The film feels very thorough and accurate. Such as in the beginning with Alexandre’s case, where the story unfolds through the narrating of correspondence between Alexandre and with the Church. Was that all factual?

Yes. It was all real letters. The timeline was exactly as it took place in real life.  Alexandre started off alone in his fight with the church, which took place over two years. When he realized nothing would change, he decided to take matters to court. Once it was handed over to the hands of justice, he felt the matter was beyond his control. When the police started their investigation, they discovered another victim Francois (Denis Ménochet). Francois was then inspired to open the association for support for other victims.

We hear a lot of stories associated with the Church and paedophilia, an institution that supposedly protects the vulnerable. It feels so hypocritical and shocking that in most cases the church seems to always try and cover it up.

Paedophilia exists everywhere. In many institutions. I think the problem with the Catholic Church is they treat it as a sin, like homosexuality or abortion. No more or less. An equal sin. They didn’t realize it was an actual crime. Now I think they understand… Or at least I hope they do… Some of them understand now the damaging long-term effects on the victims. The media is so strong around the church because it’s a place where people seek morality, honesty and love. As paedophilia is a crime, then it sends a conflicting message, especially with the message of protecting those less fortunate and vulnerable, such as children. There is a contradiction of the Catholic Church and facts. That’s why it’s so shocking and it gets so much attention.

It was interesting to see the priest Preynat (Bernard Verley) admit openly that he is a sexual predator and owning up to his actions. Yet at the same time, he still wanted to carry on being a priest.

Preynat felt out of bounds. Maybe he felt untouchable. He is not grounded. And I did not want to show a monster. I wanted to show a human being. Someone who didn’t fully grasp what he was doing. Not realizing how much pain his rapes caused. He didn’t even realize it was a crime. And also, to show him as someone who is very egotistic, selfish. So, with Bernard we tried to show as much as possible this aspect of his humanity. And at the same time, to show him as a person out of touch with reality.

There are three stories. What was the choice for those three?

Well the first two was part of the factual narrative. Alexandre being the first to take on the Church. The investigation then uncovering the story of Francoise who then went on to set up the association. The third one, I felt was the one we had a choice for. There were over 70 victims. I asked Francoise and Alexandre to give me some examples of people who are not from the same social class, with no family, perhaps who had more suffering. And they directed me to Emmanuel (Swann Arlaud). It was very touching meeting him and I decided to follow him.

Arlaud’s performance was a highlight for me.

He is a great actor. He didn’t meet the real Emmanuel. I didn’t want the actors to meet the real victims. For him it was kind of…. composition. The performance was strong because the character is suffering so much and at the same time the creation of the association was a relief for him… a rebirth. A new way for him to suddenly exist. Making him realize why everything in his life was failing so much before. It’s a very interesting character for an actor.

I remember the first screening from the Berlinale earlier this year. Preynat got de-frocked in July.

Yes, after the release of the film.

Do you think the release of the film may have influenced the Church’s decision to defrock him?

I think it did because the victims were waiting for the defrocking of the priest for a very long time. It’s not a coincidence this happened after the release and success of the film in France. There is a link, I’m sure. I believe it was important for the Church to be seen on the side of the victims, because until the release of the film, you had the feeling the Church was still very much protecting Preynat.

What’s next for you?

Ah something much lighter than this film, for sure. It will be a coming of age movie with teenagers.

By the Grace of God is released in cinemas on the 25th October 2019.