By Linda Marric I Am Not Your Negro, five simple words which carry with them 400 years of American history. In this moving documentary drama, Raoul Peck gives legendary civil rights hero and award winning writer James Baldwin, a voice from beyond the grave almost thirty years after his passing. Credited in the film as […] 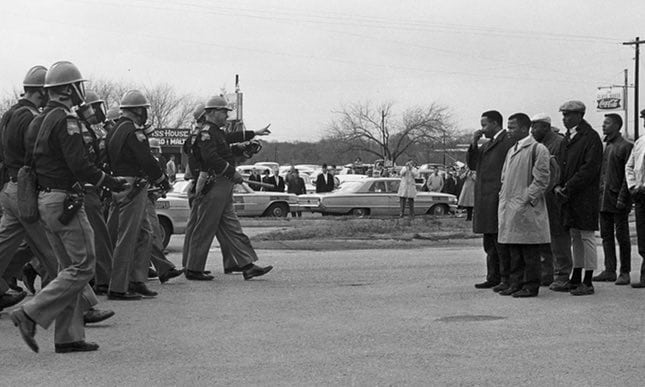 I Am Not Your Negro, five simple words which carry with them 400 years of American history. In this moving documentary drama, Raoul Peck gives legendary civil rights hero and award winning writer James Baldwin, a voice from beyond the grave almost thirty years after his passing. Credited in the film as writer, James Baldwin’s words can be heard through the masterfully solemn narration by Samuel L Jackson and tell a story from the frontline of the civil rights movement as it happened then, and as we’ve never seen it before.

Told through a series of letters sent by Baldwin to his literary agent in 1979 and featuring real life footage from the ‘50s and ‘60s, I Am Not Your Negro presents its audience with a moving retelling of the huge sacrifices made by Baldwin and other civil rights figures during those historical times. In the letters, Baldwin describes a new project in which he hopes to give an honest account of the lives and successive assassinations of three of his closest friends – Malcolm X, Medgar Evers and Martin Luther King. Sadly, the project was never finished and at the time of his death in 1987, only thirty pages were found of a book that he had hoped to call Remember This House. Baldwin was not only left bereft by the assassinations of his friends, he was also driven to confront white America about its centuries’ old violence and subjugation of his people. Intelligent, articulate and possessing the inherent ability to put his point across as lucidly as possible, Baldwin is not only mesmeric, but also thoroughly likeable.

With exerts from Baldwin’s countless TV appearances, the film attempts to reconciles millennial America and the Black Lives Matter movement with its civil rights roots, and shows that the struggle may seem different, but the issues are still very much the same. Taking a leaf out of Franz Fanon’s own research into black identity in a predominantly white society, Baldwin delves into every day American life and asks the questions nobody wants to ask. I would dare anyone not to be moved to tears by Baldwin’s visceral cri de coeur for the betterment of his people. Peck manages the impossible by allowing Baldwin to tell an important story to people who may not have heard it before.

I Am Not Your Negro is as serious as it is compelling to watch; Samuel L Jackson’s narration is faultless; at no point does he try to emulate Baldwin in the slightest, setting instead for an honest and solemn rendition of his words. I Am Not Your Negro is an important film which needs to be seen by as many people as possible. Its themes are as important today as they were yesterday, especially in the current climate of radical right-wing ideas and racist sentiment which seems to be sweeping Trump’s America.

I am Not Your Negro is in cinemas from Friday April 7th,