Wyndham Hacket Pain @WyndhamHP The monochrome style and real life boxing story may draw comparisons between The Happiest Day in the Life of Olli Mäki and Raging Bull, but there is little else in common with the Finnish film being much gentler, smaller, and understated than Martin Scorsese’s masterpiece. Told simply, this film follows the […] 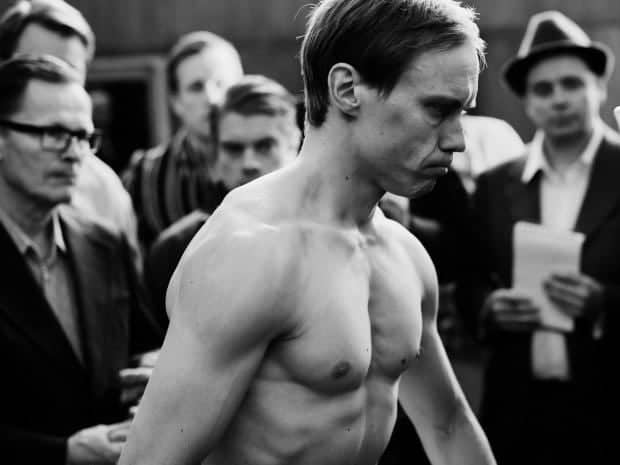 The monochrome style and real life boxing story may draw comparisons between The Happiest Day in the Life of Olli Mäki and Raging Bull, but there is little else in common with the Finnish film being much gentler, smaller, and understated than Martin Scorsese’s masterpiece.

Told simply, this film follows the preparations of Finnish featherweight boxer Olli Mäki (Jarkko Lahti) in the lead up to his world championship fight against American Davey Moore (John Bosco Jr.). Billed as the greatest day in Finnish sporting history, the fight and the training for it gain much media attention and Olli starts to feel uncomfortable with all the focus on him. Meanwhile, in the weeks before the match Olli falls in love with Raija (Oona Airola), at what his coach Elis Ask (Eero Milonoff), a former boxer himself, describes as the worst possible time.

Unlike most sports films where winning at whatever cost, often at the detriment of their wider life and personal relations, is all that is important, Olli is willing to compromise his training to hold the rest of his life together. Olli seems to be accepting of his fate and ultimate loss even before he gets in the ring. As a viewer there is no point at which you believe that he will come out victorious. This makes him a very unlikely hero and one who bears little in common with today’s sporting stars.

The title may seem sarcastic, given how the match ends, but why shouldn’t it have been the happiest day in Olli’s life? With 30,000 people cheering his name and the attention of the whole country on him, he achieved more in defeat than any of his countrymen before him. The cruel irony is that the hype and press that accompanied the match made out that Olli was a true contender when even those around him did not expect him to beat the American champion. In doing so what should have be viewed as a triumph is ultimately seen as a disappointment. The film, though, is more interested in smaller moments and personal pleasures, and is charming in its celebration of modesty, self-acceptance, and the muting of ambition.

The cinematography matches these qualities and is shot beautifully in black and white, in a style that is feels like a hybrid of Jean-Luc Goddard and Ingmar Bergman. There is both a freedom and restraint to the 16mm footage that manages to create a melancholic and intimate feel. Olli can sometimes come across as distant or unengaged, but you also feel like you are in the room with him, as a witness to his attempts to shelter himself.

Beautifully shot and impeccably crafted, The Happiest Day in the Life of Olli Mäki is an unassuming and intriguing look at the most unlikely of sporting stars. Juho Kuosmanen’s debut feature is not flash or overdramatic but instead sincere in its optimism that better days lie ahead.

The Happiest Day in the Life of Olli Maki is in cinemas from Friday 21st April.