By Linda Marric In Going In Style, director Zach Braff opts of a rather generic style of filmmaking to bring us a less than exciting heist movie featuring three of Hollywood’s most respected veteran actors. This remake of a Martin Brest’s 1979 movie of the same premise and name, sadly falls short of convincing on […] 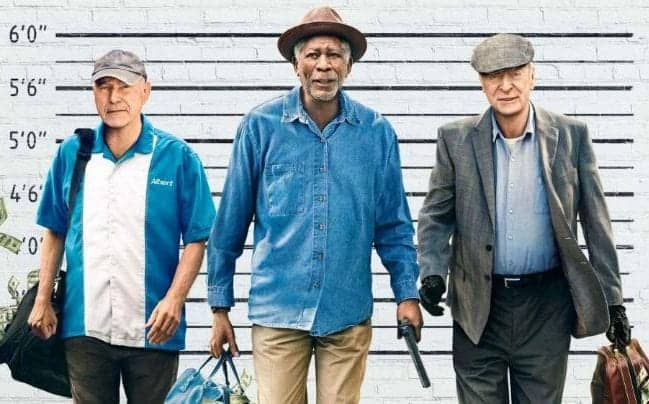 In Going In Style, director Zach Braff opts of a rather generic style of filmmaking to bring us a less than exciting heist movie featuring three of Hollywood’s most respected veteran actors. This remake of a Martin Brest’s 1979 movie of the same premise and name, sadly falls short of convincing on all accounts, and in absence of an interesting story to tell, resorts instead to cheap laughs to make up for its shortcomings

Joe (Michael Cain), Willie (Morgan Freeman) and Albert (Alan Arkin), are three old friend and colleges from their time working at the same factory for over thirty years. Furious at losing their pensions when their factory closes down, and spurred on by Joe who is in danger of having his home repossessed, the trio hatch up a plan to rob the bank they believe to be responsible for their misfortune.

In theory, all the ingredients are there, three well loved actors, a bank heist and a great original material to work with. And yet, Going In Style fails to make any serious commentary on the worthy cause it purports to represent. Make no mistake, although the film wants you to root for these three wronged pensioners, this is no I, Daniel Blake. Despite having enough material to make a real social commentary about globalisation and capitalist greed, Braff misses a chance to make a valid point, and instead turns the whole thing into an unfunny piece of schmaltz, which is sure to amuse some, but will frankly leave most of us cold.

Going In Style, isn’t a terrible movie, it has a decent enough narrative arc and a brilliantly talented cast, the problem is that the film is just not funny enough to warrant ninety minute of anyone’s precious time. Cain is likeable as ever and Arkin more or less phones it in. As for Freeman, well….he’s Morgan Freeman and could sound and look good reading from the Yellow Pages. On the whole, the film is adequate enough for a family outing, but if you’re looking for something meatier, look elsewhere, because you will not find it here.

Going in Style is in cinemas from Friday April 7th.