One could contemplate, for hours, the arguments for & against the judgment of director Rupert Sanders & his Hollywood moguls to cast a very caucasian Scarlett Johansson in the lead role of a live-action remake that’s based on an adored Japanese property, but the conclusion would ultimately be the same; no matter who they picked […] 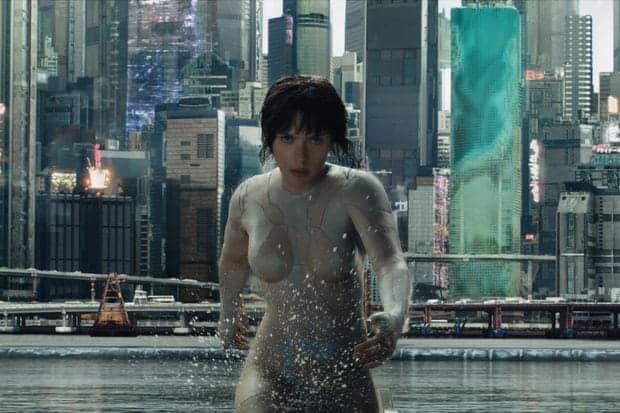 One could contemplate, for hours, the arguments for & against the judgment of director Rupert Sanders & his Hollywood moguls to cast a very caucasian Scarlett Johansson in the lead role of a live-action remake that’s based on an adored Japanese property, but the conclusion would ultimately be the same; no matter who they picked to play the iconic Major of Section 9 squadron, it wouldn’t make this drab & inert sci-fi thriller any more involving.

Indeed, Johansson is arguably one of the only virtues in a film that appears to be taking its cue from the bewilderingly tortuous Matrix sequels – markedly ironic given that the Wachowski siblings have often cited Mamoru Oshii’s seminal anime as a primary source of inspiration for the original Matrix movie. The Major is still an intriguingly cold & introspective protagonist, whom Johansson configures with a reflective curiosity; carefully contrasting her physical strength & psychological susceptibility with an accomplished restraint that’s underpinned by her character’s brooding stoicism.

It’s a spirited central performance, in a mentally barbarous blockbuster that’s as oppressively sombre as it is punishingly soulless. In a desperately futile attempt to explain away the controversial casting decision, writers James Moss & William Wheeler have tinkered with narrative, reprogramming it so as to place the emphasis squarely on Johansson’s Major – a cyber-enhanced soldier with a human mind – as she endeavours to solve a series of high-profile murders. A mystery that soon propels her into piecing together her own past, after it is discovered that the truth told to her by her creator, Dr. Ouelet (Juliette Binoche), was a fiction constructed by a shady robotics company.

Existential digressions concentrated on ideas of identity are present, but only serve to try and rationalise the contentious choice for lead actress. The plot itself is a mind-numbingly convoluted mess, bogged down by increasingly frantic efforts to shape the storyline into a cohesive whole.

The resulting feature is little more than a lifeless replicant, presumably designed to exhaust you with endless exposition to the point where the colourful cosmic visuals can submerge you in a hypnotic trance. Yet even they fail to impress; the original’s moody metropolis now reimagined as a gleamingly synthetic cityscape that takes more than a little of its creative stimulus from Ridley Scott’s vision of Los Angeles in 2019.

Given how ambitious Sanders’ vision for Snow White was, it’s a shame to discover just how prosaic his approach is here. This remains a hollow shell of a film, whatever your attitude towards its apparent whitewashing may be.

Ghost in the Shell is on general release from Friday 31st March.