Dubbed a “ramen western,” Tampopo shares the narrative skeleton of, you guessed, a western. Substitute gun slinging for noodle kneading and you’ve taken a step towards the flavour of Jûzô Itami’s film. But, like a steaming bowl of noodle soup, Tampopo is a film for the soul packed with the kind of hearty warmth that […] 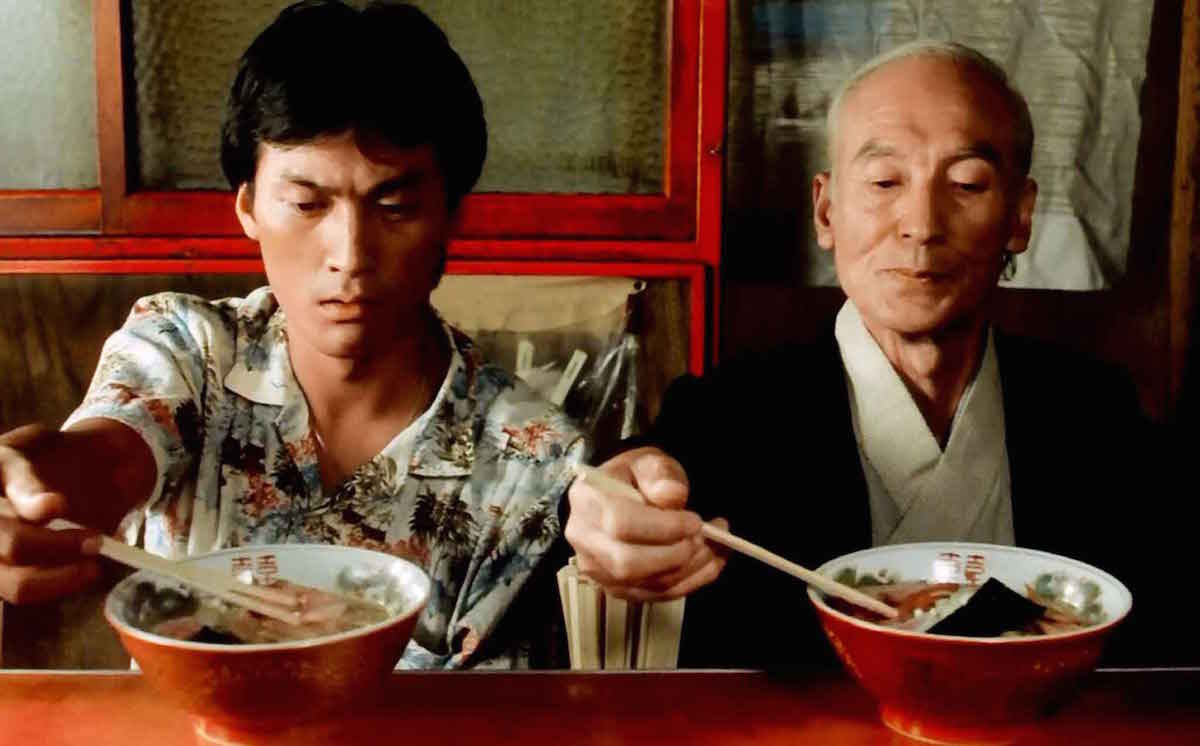 Dubbed a “ramen western,” Tampopo shares the narrative skeleton of, you guessed, a western. Substitute gun slinging for noodle kneading and you’ve taken a step towards the flavour of Jûzô Itami’s film. But, like a steaming bowl of noodle soup, Tampopo is a film for the soul packed with the kind of hearty warmth that you want to take a bath in.

Tampopo (Nobuko Miyamoto) is a single mum who, after the death of her husband, has taken over his now failing noodle bar. One rain sodden night, two truckers role into town and stop off for a late night meal and like the man with no name, Gorô (Tsutomu Yamazaki), quickly realizes this noodle joint needs some saving. Your noodles “have sincerity, but they lack guts,” he tells the struggling ramen chef, before agreeing to endeavour to make Tampopo and her place the best that it can be.

Ultimately, Tampopo is about the unifying and communal nature of food. It is the yarn that wraps around the characters and their lives, bringing them closer and binding them together. What starts out a lonely story of a struggling ramen chef grows to include Gorô, his young companion, Gun (Ken Watanabe) and then a vagabond and expert in the art of crafting an amazing broth, the butler of a wealthy elderly gentle who is master noodle maker and finally a boisterous interiors decorator. This eclectic gang of ramen masters pull together, each investing their expertise to help launch Tampopo’s new noodle bar off the ground.

It is spirited and warm and moving and whilst we always know that Tampopo’s restaurant is guaranteed to enjoy eventual success, it is a total delight to travel the length and breadth of the narrative as she struggles to craft the perfect broth, sneakily extracts the secret to the perfect noodle from an unassuming rival noodle bar and watches, hand in heart, as her various attempts to create the perfect bowl are tasted and judged, scrapped and made anew.

But, what really makes Tampopo so special are the tangential side stories that break the film up. They are delicious little micro narratives all bound by food that serve nothing to progress the film’s overall plot, but work as the seasoning that helps to give the film its rich depth of flavour. A spaghetti lesson given to a group of finely dressed, young Japanese women who, in a ritzy restaurant, are told never to slurp their pasta descends into a cacophony of noisy slurping when they witness an older western gentleman do exactly that. An exchange between two lovers builds in sensuous erotic tension as they pass an unbroken egg yolk between each other’s mouths until the yolk erupts and its orange filling spills down one of their chins. A tender moment between a salary man and a young boy who wears a hand written sign around his neck that reads, “I only eat natural foods, do not give me sweets or snacks – a message from my mother,” ends in a shared ice cream. These moments are celebrations of the many textures of life through food, one of the fundamentals of human existence.

By the time the credits role you’ll be bowl in hand asking, “please sir, can I have some more.”