By Michael McNulty Released in 1951, Samuel Fuller’s The Steel Helmet was the first Korean War film ever made. Fuller’s third feature, made on a budget of roughly $ 100,000, was a smash hit with audiences and grossed over $ 2 million at the box office. Many a great war film owes a credit to […] 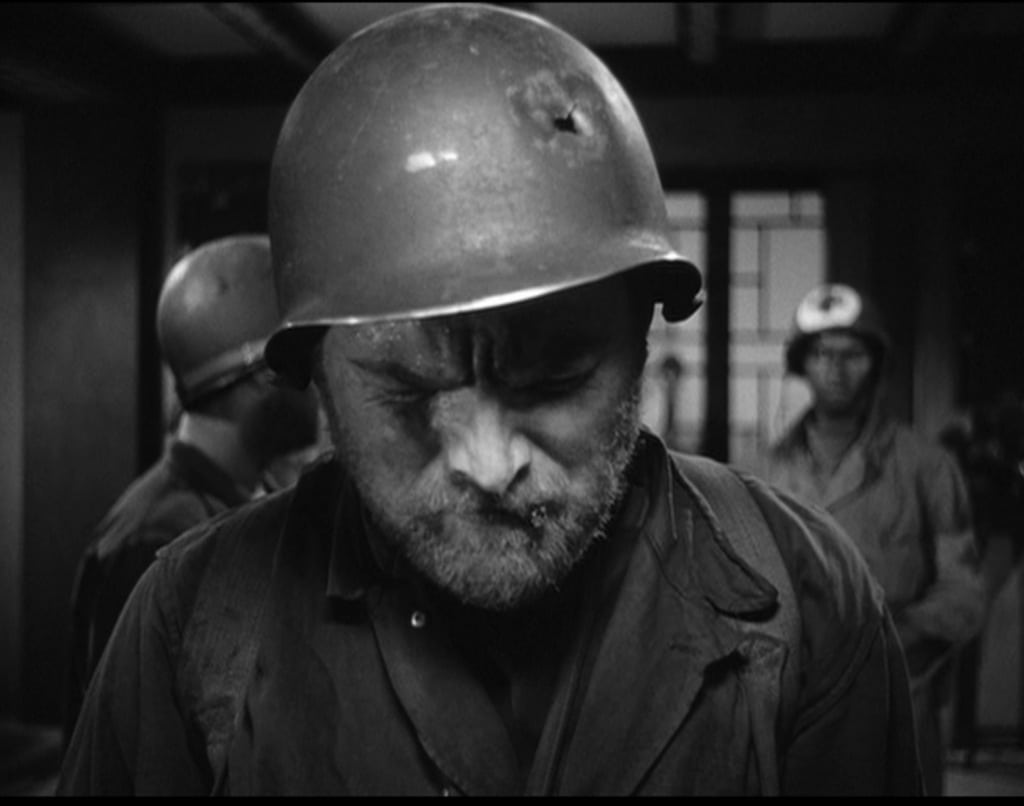 Released in 1951, Samuel Fuller’s The Steel Helmet was the first Korean War film ever made. Fuller’s third feature, made on a budget of roughly $ 100,000, was a smash hit with audiences and grossed over $ 2 million at the box office.

Many a great war film owes a credit to The Steel Helmet.  In the wake of World War Two, Hollywood churned out films where conflict was easily defined and compartmentalised into good vs. evil.  The moral complexity behind conflict, although not entirely ignored, was generally circumnavigated.  With The Steel Helmet Fuller put on a scuba suit and dove straight in.

The film may lack in the gritty surface realism of war, most of it was shot in a studio, with LA’s Griffith park standing in for the thick Korean jungle (and obviously so).  But, The Steel Helmet is a screaming accomplishment all the same, a tough portrayal of the madness and futility of combat.  It trades in Hollywood heroics for a true to war experience years ahead of its time.

“This story is dedicated to the United States Infantry” reads the opening title overlaid across a bullet pierce “steel pot.”  It moves and slowly a face emerges and then a body, that of the gruff, hard-bitten Sgt. Zack (Gene Evans).  Hands bound behind his back, he crawls through a mass of bodies, slaughtered GIs, only to stop suddenly as the sound padded footsteps approach.  A rifle hangs loftily by bare feet.  Friend or foe?  Sgt. Zack rolls over and plays dead, a knife comes out and the ties are cut.  It is a young boy, not a “gook,” he corrects Zack, “I am a South Korean.”

Zack dubs the young boy Short Round (a name later appropriate by Indiana Jones’ young companion in the Temple of Doom) and they head out looking to find friendlies.  Along the way they team up with Thompson (James Edwards), an African American medic and like the Sergeant, a World War Two veteran.  Slowly a patchwork platoon is stitched together as the three join forces with Lt. Driscoll’s (Steve Brodie) ragtag team of soldiers, amongst them Tanaka (Richard Loo), a Japanese America (and another WWII vet), Fat Pat (Robert Hutton), a former conscientious objector, Joe (Sid Melton), a mute and Baldy (Richard Monahan), who is, you guessed it, bald.

Lt. Driscoll has been tasked with setting up an Observation Post at a nearby Buddhist temple, of which Short Round knows the location.  In desperate need of Zack’s battle hardened  experienced, he agrees to see them as far as the temple in return for a box stogies.

Before moving into film Samuel Fuller worked as a freelance journalist as a crime reporter.  He also served in the Second World War and kept a diary, excerpts of which were pulled out and used directly in this film.  All of this comes through, giving The Steel Helmet a tabloid-y, search for the truth, searing honesty that cuts through theatrics to the brutal core of a soldier’s experience.

Through the muzzle flare and gun smoke, Fuller also boldly addresses the hypocrisy and complexity of America’s race relations, highlighting an ugly truth in a country that prides itself on freedom and equality.  Later in the film, the platoon takes a North Korean soldier prisoner.  In two different conversations, one with African American medic and the other with Japanese American Tanaka, the POW raises the question as to why fight for a country in which you are oppressed.  With Tanaka the POW brings up the Japanese American internment camps, a part of American history largely ignored and never before, at this time, brought up on film.

The final battle, as they defend the temple outpost, is a furious fire fight with the characters deafened by bullets and explosions and enveloped in a thick fog.  Stg. Zack, hit by an incoming bomb, rises from the rubble in a PTSD stupor, perfectly capturing the nightmare of war and all the emotions that go with it and all of it under the peaceful gaze of a giant statue of Buddha, alluding to the futility of conflict in the eyes of a greater power.

The Steel Helmet ends with a title card overlaid over the soldiers as they march on from the outpost, now part of a larger platoon.  It reads, “There is no end to this story,” concisely summing up humankinds relationship with war and pointing towards America’s next big military engagement, the Vietnam War.