Christmas is the season of giving, when people come together and rejoice in each other’s company. So, what better way to spend your pre-Christmas Friday than in the company of three loathsome characters, whose sense of cheer comes at the expense of others and to watch them slowly descend into a black hole of greed, […] 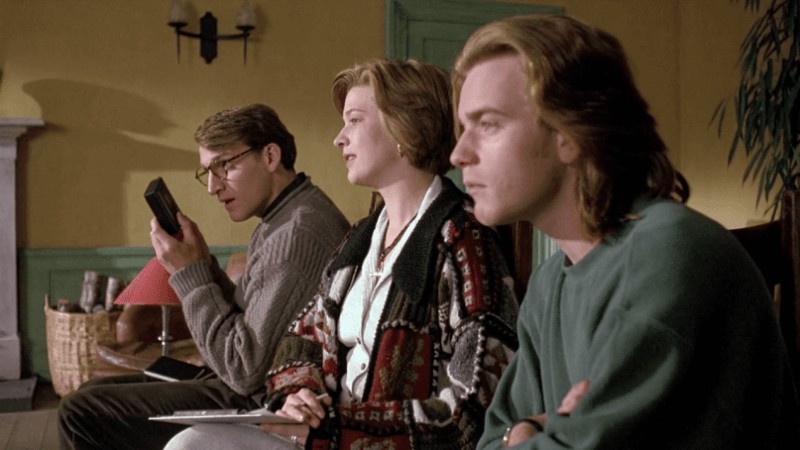 Christmas is the season of giving, when people come together and rejoice in each other’s company. So, what better way to spend your pre-Christmas Friday than in the company of three loathsome characters, whose sense of cheer comes at the expense of others and to watch them slowly descend into a black hole of greed, selfishness and murder? This week’s Forgotten Film Friday marks the immaculate conception of a very different, more cinematic Holy Trinity, that of Danny Boyle and long-time collaborators, writer, John Hodge and producer, Andrew MacDonald, in the trio’s first feature film, Shallow Grave.

Made on a shoestring budget of one million pounds, Shallow Grave was a co-production between Film 4, the Glasgow Film Fund and Figment Films. It was an unexpected smash hit at the box office, won tremendous acclaim from critics and picked up a BAFTA for best British film of the year.

It is a claustrophobic chamber piece, part satirical black comedy and part thriller that centres on a group of middle class, young professionals who scrape the bottom of the barrel when it comes to charm. They are a truly despicable threesome, there is Alex (Ewan McGregor), a journalist, David (Christopher Eccleston), an accountant and Juliet (Kerry Fox), a doctor, who when we first meet them are interviewing candidates to take up the spare room in their gloriously baroque apartment in Edinburgh. They ooze a smarmy arrogance, using the opportunity to mock their unassuming candidates. Until, they meet Hugo who passes as acceptable.

Hugo moves in, but his residency as a living, breathing person is short lived and the three discover him dead of an overdose the following day, along with a suitcase stuffed to the brim with cold, hard cash. A quick pause and brief conversation later and the three have decided not to call the coppers, but instead to hold onto the cash and dispose of the body, a task that involves cutting off hands, feet and smashing in the corpse’s teeth so that it cannot be identified. This falls to David, the only character who demonstrates genuine reservations about the whole endeavour and the consequences of which push him over the edge and into a world of paranoia and fear that see him locks himself in the attic with the suitcase of cash, drilling holes in the ceiling so as to spy on his room-mates below. As always, with large amounts of unaccounted for cash, the coppers and two thugs are thrown into the mix to complicate matters further.

Shallow Grave is bitingly funny, and blacker than the coal Santa gives to naughty kids. The threesome are a deplorable bunch with whom no viewer can rightly identify with (if you can, perhaps it may be worth setting some time aside in the day to do some soul searching) and yet there is something grossly and riotously funny about this. It is a delight to watch as, from the moment they decide to keep the cash and David is forced to carry out his gruesome duty of dismembering Hugo’s body, the trio collapse into a world of paranoia and self-interest. David’s descent into an attic bound golem, crawling, hunched over between the shafts of light, from the drill holes he’s drilled through the attic floor, that pierce through the blackness of his new living quarters is chillingly eerie.

Most interesting, is the rugged individualism driven by greed and selfishness that runs through the centre of this film. Each character is sucked in by the suitcase of cash, so much so, that it compromises the fabric of their friendship (granted, it was a fairly fickle friendship to begin with). But, it feels like the film is playing with a political subtext that finds new relevance today as morality and collectivism take a backseat to the pursuit of personal gain at the expense of other people.

It is a lean mean script that dispenses with everything other than its bare essentials and Boyle keeps things moving along at a deliciously thrilling pace, packing the film full of beautiful visual flourishes. Hugo’s dead, grey body stands out against the dark-red bed sheets he is discovered on. The wide open spaces of the threesomes flat, with its blue, yellow and green painted walls feels cold and impersonal. And, the violence, when it plays, although never explicit, is made gruesome through a red filter, the sound of a saw on bone or the heavy thud of a hammer. It works to great success.

So, do yourself a favour, grab a fistful of mince pies, a glass of brandy and revisit a great first film by one of Britain’s great directors, you won’t regret it. Merry Christmas!