By Michael McNulty Henri-Georges Clouzot’s 1955 horror thriller Les Diaboliques was based on the novel by Pierre Boileau and Thomas Narcejac, (more commonly recognized by their nom de plume Boileau-Narcejac) Celle qui n’etait pas. One of two of their novels that was snapped up and turned into a film, the other, D’entre les morts, was […] 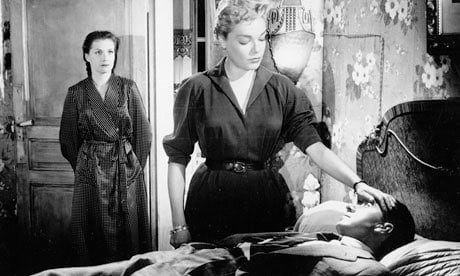 Henri-Georges Clouzot’s 1955 horror thriller Les Diaboliques was based on the novel by Pierre Boileau and Thomas Narcejac, (more commonly recognized by their nom de plume Boileau-Narcejac) Celle qui n’etait pas. One of two of their novels that was snapped up and turned into a film, the other, D’entre les morts, was adapted by Alfred Hitchcock and became the basis for one of his masterpieces, Vertigo.

Much of Les Diaboliques’ power comes from the film’s twists and to give it away would be to ruin it. The closing film card asks that people refrain from telling others of what they have come to witness over the course of the two hours that have unfolded and it becomes the responsibility of the spectator not to spoil the film for future viewers. So in short and without giving too much away the plot: Christina (Véra Clouzot), the owner of a private boy’s boarding school and wife to abusive husband, Michel (Paul Meurisse), is persuaded by Nicole (Simone Signoret), Michel’s mistress, who too suffers his abuse, to murder the man. And so, it is with chilling exactitude the two drug and drown Michel in a bathtub and then dump the body in the boarding school pool, an attempt to make the whole thing look like an accident. Christina, fraught with anxiety and a heart condition, has the pool drained only for the two to discover that the body is no longer there. The question insisting upon them, what has happened to Michel and the accompanying mystery surrounding his dry cleaning, a room rented in his name and a school photograph all suggest a spooky truth no one wants to fully consider. Is Michel dead, the question lingers.

Underneath the veil of this solidly built narrative are subtle hints of confused sexuality. Percolating like stove top coffee is the faint suggestion that Christina and Nicole want to share a romantic and sexual relationship. Whether this was Clouzot’s direct intention is up for debate, but the way in which the characters are built and the setting in which the action unfolds echo a quiet homoeroticism. Nicole, the strong, tall, blonde; the petite, ultra feminine Christina and an all boy boarding school.

There is little to fault Les Diaboliques, it’s a smartly made, handsome, classic murder film with sturdy performances from all, the stand out being Meurisse who makes Michel so easily hateable. Clouzot builds the suspense and ties in the mystery masterfully and runs a thick thread of dark humour through the middle. It is nail biting, heart palpitating turn of the screw cinema, a total delight.