By Michael McNulty Based on a short story written for Playboy by fantasy-horror and sci-fi writer Richard Matheson – perhaps more widely known for his work on The Twilight Zone, and for authoring I Am Legend – Duel began its trajectory towards life as an ABC TV movie of the week when it was picked […] 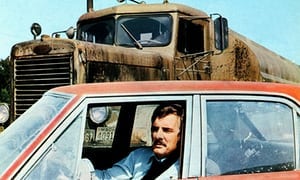 Based on a short story written for Playboy by fantasy-horror and sci-fi writer Richard Matheson – perhaps more widely known for his work on The Twilight Zone, and for authoring I Am Legend – Duel began its trajectory towards life as an ABC TV movie of the week when it was picked up by Universal. Steven Spielberg, then in mid-20s and working as a television director, was attached after impressing the film’s executive producer with a rough cut episode of Columbo he had recently directed. What began as a 70-odd minute feature, Spielberg’s first, garnered so much attention that it was given a theatrical release overseas, which saw its run-time extended to 90 minutes and it being positively received by international critics and audiences alike.

For those unfamiliar, it’s Jaws on wheels before Jaws was even a twinkle in Spielberg’s eye. It centres on David Mann (Dennis Weaver), a meek, suburbanite who is tormented by an 18-wheeler on a work commute. On its surface, Duel is a taut thriller; a full throttle game of cat and mouse. But, it’s also much more – the film addressing ideas of masculinity, man versus machine, and class divide.

It opens from the car’s point of view – a dainty, immaculately looked after red Plymouth Valiant – as it pulls out of its garage, travels through the city, down the highway, and into the Californian outback, before revealing David to be in the driver’s seat; a pair of yellow tinted shades resting across his eyes. The whole sequence is underscored by a radio programme. A male caller speaks to a presenter about his position in the household, “I’m not the head of the family, yet I am the man of the family, although there are people in the neighbourhood who’d question that,” the caller says, a sentiment later repeated by David.

It’s not long before David find himself stuck behind a giant truck that will not let him pass, and what feels like the behaviour of a bored long haul driver evolves into something much more sinister. As events unfold, David is stripped of his civilized sensibilities and forced into a primal state of survival, as he must contend with the murderous intentions of a gas guzzling, 40 tonne truck.

The truck, a Peterbilt 281, is the real villain here. A rusty, smog spewing beast that storms down the highways at break-neck speeds. Its cab morphs into a frightening face; the windscreens like two, giant lifeless eyes. Its front grill sits like enormous steel teeth, caked in mud & dead bugs, and its bumper sporting the license plates of struck down drivers run off roads to their death, like a gruesome trophy necklace. Although we catch glimpses of the driver – his hand on the steering wheel, or out of a window waving drivers by – we never see his face. When the big-rig is moving though, the cab appears empty, as if the vehicle were being driven by no one at all; a vessel powered by the supernatural.

Duel was shot in 12 days on location, a detail Spielberg was insistent on for the sake of creating and maintaining a real sense of threat and thrill. It’s superbly shot, dynamic and fluid, caught on a number of cameras mounted to the cars, and also through the use of camera operator Pat Eustis’ specially designed, low-riding camera car that allowed him to weave in and out of the action during the filming.

Adding an extra layer of discomfort to the whole of Duel is its score. Here Spielberg substitutes actual music for noise. The film plays out to the tune of eerie wind chime sounds, psycho screeches, and brooding hand drums that reflect David’s panic and desperation; it’s invigorating stuff.

Spielberg juxtaposes the claustrophobic confines of David’s fuel efficient valiant with the endless vistas of California’s country roads, and throws the mythologised freedom of the open road out of the window at 90 miles an hour. Duel is a taut, thrilling chase movie with more pep than a 200-horsepower muscle car.