This week we throw ourselves into the sweaty fray of Laurent Cantet’s school set docudrama, The Class (original French language title, Entre Les Murs).  Based on the semi-autobiographical novel of the same name by François Bégaudeau, who also co-wrote the script and stars, Cantet brings to life, with startling realism and pulsing energy, the story […] 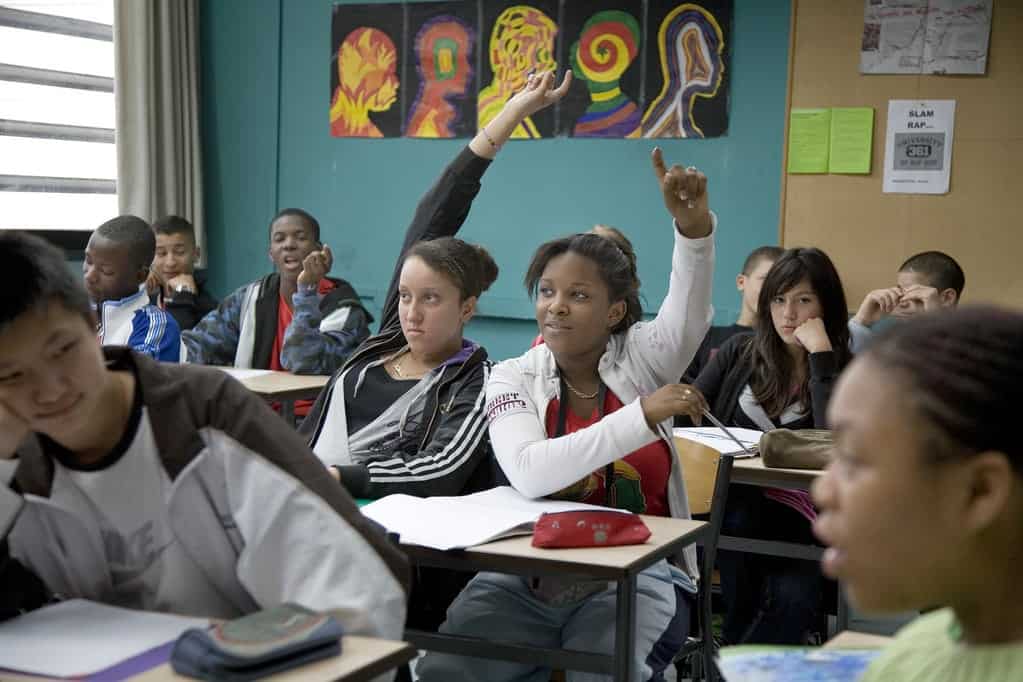 This week we throw ourselves into the sweaty fray of Laurent Cantet’s school set docudrama, The Class (original French language title, Entre Les Murs).  Based on the semi-autobiographical novel of the same name by François Bégaudeau, who also co-wrote the script and stars, Cantet brings to life, with startling realism and pulsing energy, the story of a French Language and Literature teacher for a group of 14 to 15 year old banlieue kids in a public school.

Never before has a classroom setting felt so real.  Cantet crafts a buzzing centre of burgeoning adolescence and learning, of all kinds.  It’s a visceral feast and a total pleasure to immerse yourself in the familiarity of this world, done completely differently, as François and his students navigate through the ups and downs of school life.

We begin as François makes his morning commute to work.  He walks through the school’s gates and we are never to see him outside of the confines of this space again.  His home and his personal life are left out of sight.  The action is here – entre les murs.

It is the beginning of the school year and the teachers have gathered in the break room to introduce, pause and collect themselves, before they begin a year that, as their faces’ belie, will be a difficult one.  Two teachers sit combing through an attendance sheet with one informing the other which students are naughty and which are nice. This isn’t a moment that fills the film’s sails with a dramatic wind of “oh, the teachers are out to get them,” but more a slice of life example of the realities of the job.

The ensemble cast performance, filled by actual students acting up versions of themselves, is a tour de force played with the kind of improvisation that has been worked to perfection, whittling it down to a beautiful, raw core.  A mixed bag of multi-ethnic kids from low income homes, the students are a smart bunch and latch onto the words François uses to challenge them, to challenge him too.  There is nothing malicious about these students; they are simply kids in the throes of adolescence, caught up in an educational system that hasn’t kept up with them.

There is Esmeralda (Esmeralda Ouertani) and Khoumba (Rachel Regulier), best friends, who pull at Francois’ constant use of white, western names in his teaching examples, “what’s with the Bills?  Why don’t you use Aissata or Rachid or Ahmed?”  And again, later question the purpose of knowing the structure of the imperfect subjunctive.  To which François replies, “why not understand it, before you dismiss it.”  The back and forth is constant and shot with free-flowing movement that puts you right in the class, sitting alongside all the students, ducking below your table as the verbal jabs and jibes, friendly and jocular or taunting and testing are thrown around the room.

Souleymane (Franck Keïta), the most disruptive of the bunch, and who the film will ultimately rest itself upon, is the sort of misunderstood character that in Hollywood versions of the classroom drama would be saved.  Except, real life is more complicated and The Class works to reflect that.  The teenage boy becomes the centre of much debate and after a classroom blow up faces possible expulsion and a return to his home country of Mali. Bégaudeau’s François is phenomenal, the kind of low-key character and performance that blurs the lines between reality and fiction.  He is far from perfect and it is a marvel to watch him as he jostles with his students on a daily basis and see him both struggle and succeed in his role as teacher.  It is clear that François is passionate about his job and he cares for his students, but is challenged by them.  Sometimes he is capable of working challenges into moments of encouragement.  When François discovers that the reluctant Souleymane takes photos on his mobile, the teacher has him compile them into a visual biography and there is a glimmer of light and pride in the teen’s eyes.  But, later in a moment of frustration, born from an escalating situation to do with end of term assessments in which two students have been privy to information discussed in a private meeting, he explodes and calls two girls “skanks.”  This is the film, the give and take, the tension and release, the pattern and rhythm of the everyday life between these walls.

There is something so engaging and engrossing in the naturalism with which The Class is played.  It keeps you glued to your seat, transfixed in a quiet wonder and is poignant without ever feeling preachy or idealistic.  It’s living, breathing cinema.  A spectacular film.