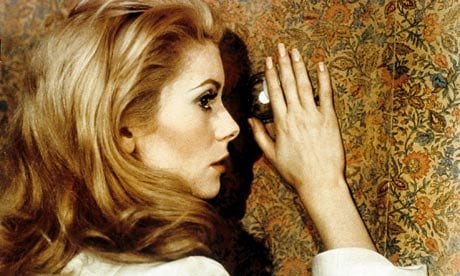 Luis Buñuel’s film Belle de Jour, released in 1967, took the Golden Lion at the Venice Film Festival and stands in film history as one of the most, if not the most, erotic films of all time. Based on Joseph Kessel’s, a Russian who lived in Argentina and wrote in French, novel of the same name, Belle de Jour may not seem as salacious now as when it first appeared, both in print and on the silver screen 40 years later. However, this is a film that has not dated and remains poignant in its depiction of the relationship between love and sexual desire.

Séverine (Catherine Deneuve), a housewife, is married to conventionally handsome surgeon Pierre (Jean Sorel) and trapped in a frigid marriage. After learning from Henri (Michel Piccoli), a friend of Pierre’s, about a high class brothel hidden away in a Parisian apartment, Séverine gives in to her dark desires, desires possibly born from having been molested as a child, and visits the place. She soon becomes the new girl and adopts the handle Belle de Jour, which reflect the hours she works, only in the afternoons before 5.

Buñuel has woven into the film flashbacks, memories, day dreams and dreams that continually blur the line between realities, immediate, fantasized and remembered, providing Belle de Jour with an ethereal and surreal, floating quality. Deneuve is perfect playing Séverine, subtle, detached and mysterious with an elegance that forgoes judgement of her sexual aberrations; she enjoys being dominated, and roughed around.

Belle de Jour is a surrealist black comedy that’s sexy and stylish and by the time the credits roll will have you wondering whether you dreamed the whole thing up.