I was born in 1981 and while I was a fan in my childhood, I came of age as a movie nerd in the mid-90s. At a certain time, as far as I was concerned, Quentin Tarantino may as well have invented cinema. It wasn’t just his movies (though they were impossibly cool, all the […] 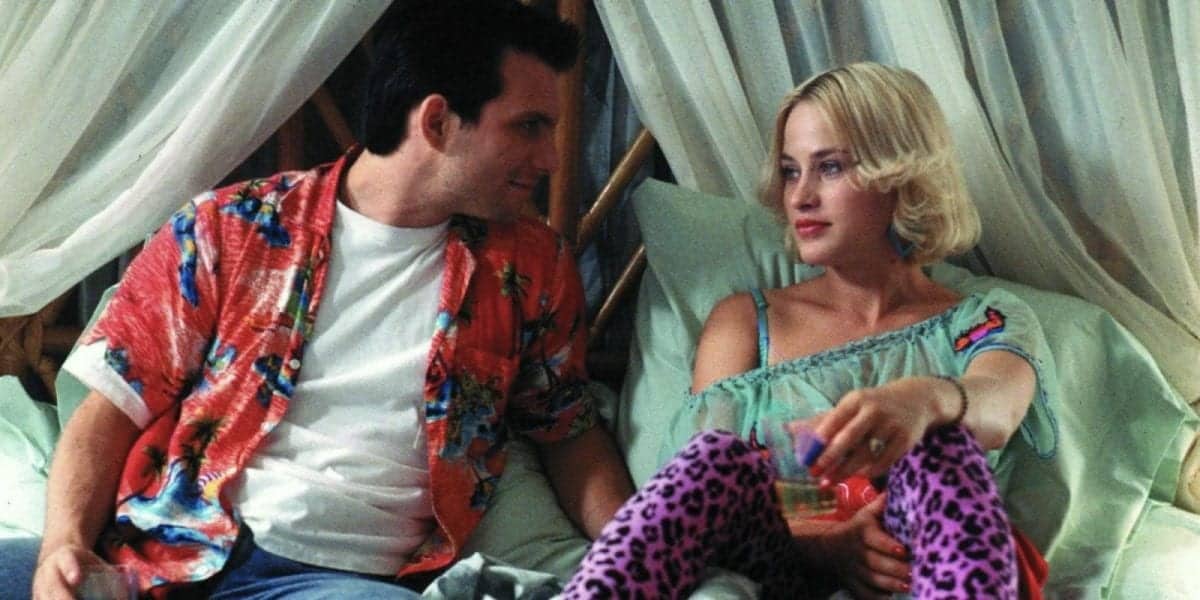 I was born in 1981 and while I was a fan in my childhood, I came of age as a movie nerd in the mid-90s. At a certain time, as far as I was concerned, Quentin Tarantino may as well have invented cinema. It wasn’t just his movies (though they were impossibly cool, all the more so because my friends and I weren’t old enough to watch them), it was Tarantino himself. The video store clerk who got his film education from the movies he pulled off the shelves while he was working; the film nerd made good. Tarantino made us all think that watching endless videotapes tapes in our bedrooms could eventually lead to a career as a celebrated auteur… once we figured out what that word meant.

I’ve cooled on Tarantino over the years. In a lot of cases seeing the movies that inspired him has been like knowing how a magician’s trick is done – you can still be impressed, but it’s hard to be dazzled like you were before you saw behind the curtain. I’d contend that his career can be broken into two distinct phases; the 90s and his 21st century films, and for me it’s the former that have held up better over the years.

The story of True Romance begins as pure wish fulfilment, with call girl Alabama (Patricia Arquette) spilling her popcorn on comic book store clerk Clarence (Christian Slater) as he’s watching a Sonny Chiba triple bill and not only going home with but falling for him. to pick up Alabama’s things from her pimp Clarence ends up killing him and stealing a suitcase of cocaine, an act that puts him and Alabama on a collision course with the mob, a famous movie producer, the cops and an awful lot of bullets.

True Romance is a perfect distillation of what became Tarantino’s trademark. Though he only contributes the screenplay here, his debts to earlier films and filmmakers are clear, but what marks him out as more than a mere nostalgist is how he takes those influences and puts his own spin on them. He either makes his references something that comes sincerely from the characters or he cannibalises the ideas of other films without slavishly copying scenes (this is also thanks to director Tony Scott, and a step on from some much more naked ‘homages’ in Tarantino’s previous Reservoir Dogs). Tarantino and cherry pick their influences, but it’s Badlands that stands out. The narration that opens and closes the film nakedly draws inspiration from Sissy Spacek’s voiceover for Malick’s film, even co-opting the phrase ‘highways and byways’ that appears in Badlands’ opening, while Hans Zimmer’s score adapts and morphs the Badlands theme over and over, drawing out the idea that this is a Kit and Holly for the 90s.

That said, and whatever debts it owes to other films, True Romance is very much its own thing; a profane, , but sincere, romantic fairytale in which Tarantino (and Scott, who changed the script’s original ending) create the girl of their dreams and heroise – or rather anti-heroise – themselves. In his later period films I have felt that Tarantino’s authorial voice has overwhelmed his work and characters, all of whom tend to sound like him. That isn’t entirely absent here (listen for Chris Penn’s cop using the same turn of phrase as Clarence when he says something is ‘rotten in Denmark’), but Clarence, Alabama, Clarence’s actor friend Dick (Michael Rapaport), Clarence’s dad Cliff (Dennis Hopper), Dick’s roommate Floyd (Brad Pitt) and Alabama’s pimp Drexel (Gary Oldman) are among a clutch of characters with distinct voices that feel well defined, often within a handful of scenes. Tarantino’s work can, for me, feel like a writer talking to himself, but here his characters convince you that they’re talking to each other. That’s as much in the performances as it is in the dialogue. The words are well crafted, but you can have the best writing in the world and if it’s poorly delivered it will land with a thud.

I’m surprised that we haven’t seen Christian Slater in subsequent Tarantino works, because his Nicholsonesque cadence is perfectly suited to the dialogue. Clarence is smart and , but there are some nice details here that show him as not always believing in those skills; the repeated Elvis conversation that we assume he uses whenever he meets a woman, and his puppyish eagerness to impress producer Lee Donowitz (Saul Rubinek, enjoying his barbed dialogue). The sense is of a guy overtaken first by Alabama and then by the trouble that piles on after they meet, but trying to continue to coast the way he clearly has been so far in life. Alabama doesn’t exactly come across like a real person, but if you’re looking to cast a call girl/fairytale princess, 1993 Patricia Arquette is just about perfect. Why does Clarence instantly want to marry this girl? I’d wager that’s not a question most of the male audience asked themselves, because they probably wanted to as well. Fantasy figure though she is, Arquette plays Alabama with total sincerity. The chemistry between her and Slater shines through in their date, making the morning after of love feel honest when it could easily have come across as Alabama trying to play Clarence. Again, there are lovely details throughout Arquette’s performance, but it’s in the scene in which she’s confronted by a mobster (James Gandolfini) who beats her within an inch of her life that she does her best work. Her reactions are beautifully nuanced, calculated in a second. In many ways this scene is a menacing analogue to the date with Clarence, before the violence starts Alabama is attempting to use her charm to convince this man he’s got the wrong person. Her fight back is fierce, but still we see Alabama being smart, she’s figured this guy out, and the moment she starts laughing at the man she believes is going to kill her is both wonderfully unexpected and perfectly of the character.

Many of the other players come in and do their thing for a couple of scenes. Gary Oldman, while he’s just one of this film’s early symptoms of Tarantino’s problematic fondness for the N word, is great as Drexel. The confrontation he has with Clarence is intimidating, but there’s also an inherent ridiculousness (which Oldman is absolutely playing on) to Drexel’s entirely self-deluding persona. Also notable in a tiny part is Brad Pitt as Dick’s perpetually stoned roommate. We never saw him utilise his comic chops like this again until Burn After Reading, and I wish he did it more. However, the bit players who stand out most are Dennis Hopper and Christopher Walken. The one scene they share is a self-contained masterpiece; two great character actors going at it with they both know is fantastic and are relishing delivering. Walken’s unique speech patterns lend a different rhythm to the scene while Hopper, often a more manic presence (think Blue Velvet, Texas Chainsaw Massacre 2 or a film we’ll come to in Flashbacks To 1994), underplays. I love the resignation, that moment of decision as he launches into a story that is designed to provoke Walken to kill him quickly.

Tony Scott’s style isn’t as MTV slick here as it was in, say, his collaborations with Tom Cruise nor is it as stylised and irksome as his over-edited later films. While he brings style and some interesting staging touches to break up the long dialogue scenes – the use of Clarence and Drexel swinging a light back and forth at each other, for instance – he seems to have opted to trust the writing and largely let the words speak for themselves, while seldom resorting to a simple wide, over the shoulder, close up pattern.

I could go on and on about the film’s highlights: Bronson Pinchot getting a bag of cocaine burst all over him; Clarence’s conversation with Donowitz about distributing ‘Dr Zhivago’; the ‘You’re so cool’ napkin; the fact the cops are called Nicholson and Dimes. Personally, I like the change of the ending, it’s not entirely credible after the massive climactic shootout, but again, this is to a large degree – whether Tarantino wanted to embrace it or not – a fairytale. The moment feels appropriate.

For me, True Romance is unquestionably Tony Scott’s best film and probably Tarantino’s second best. Alabama is not the most evolved figure, and the attitude the screenplay has to her isn’t exactly deep, but I think we have to take this film on its own level. It is juvenile, it is a self-insert fantasy, but it’s one that does those things with such verve, such glee and such snappy, well crafted, and highly quotable writing that I still get caught up with it now much the same way I did when I was 14.