Peter Bogdanovich got off to a filmmaker’s dream start. Between 1968 and 1973 he made his first four films. Targets was a highly promising debut; a tense thriller, a triumph of ingenuity to use a few days of filming that Boris Karloff owed to Roger Corman. Then he made The Last Picture Show; a beautiful […] 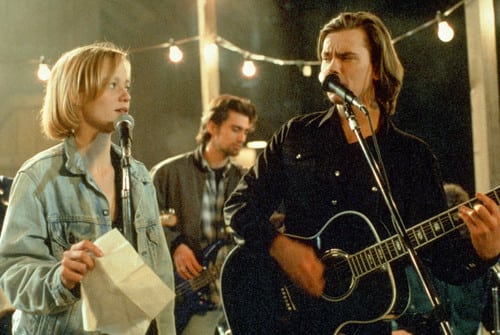 Peter Bogdanovich got off to a filmmaker’s dream start. Between 1968 and 1973 he made his first four films. Targets was a highly promising debut; a tense thriller, a triumph of ingenuity to use a few days of filming that Boris Karloff owed to Roger Corman. Then he made The Last Picture Show; a beautiful elegy for a small town that is maybe my favourite film of all time. He followed that with the glorious screwball comedy What’s Up Doc? and then Paper Moon. If his later career never hit those heights again, following a difficult decade between 1974’s Daisy Miller and his next hit, 1985’s Mask, Bogdanovich nevertheless has some truly underrated films among his later work. His 1993 release may be the best of them.

The Thing Called Love begins by following Miranda Presley (Samantha Mathis) on the bus from New York to Nashville, where she plans to become a country singer and songwriter. Through auditions at a renowned bar and music venue, Miranda meets fellow budding musicians Linda Lue Linden (Sandra Bullock), Kyle Davidson (Dermot Mulroney) and James Wright (River Phoenix). She and Linda begin sharing a motel room to save money and Kyle and James both fall for Miranda.

For many of his films, Bogdanovich served as his own screenwriter, but here he was handed a screenplay by Carol Heikkinen, whose other work, Empire Records and Center Stage, also speaks to a love of music in film. Apparently the reason that Bogdanovich was sought for this film was that the executive working on it at Paramount loved The Last Picture Show. At first the comparison seems a stretch, but what that film showed and what The Thing Called Love also benefits from is Bogdanovich’s brilliance at portraying group dynamics and shifting relationships. This is the key element here; the completely believable relationships between the main characters and the different dynamics of them. While Miranda is definitely the main character, and Mathis appears in practically every scene of the film, there is nobody here who gets sidelined. Heikkenen and Bogdanovich treat all the characters’ journeys with equal import and give each of them – even the initially cartoony Linda Lue – rounded personalities.

In the short retrospective documentary on the film’s DVD release (which is four minutes longer than the theatrical release and is the version I rewatched for this piece) several of the cast and crew note that there was a close, familial, atmosphere on set, particularly between the four young leads, and we can feel that in the film. There is initially an easy chemistry between Phoenix and Mulroney, speaking to their friendship from working together on Silent Tongue, which allows us to invest more in the love triangle as the stakes feel higher than simply who will get the girl. The reverse is true between Miranda and Linda Lue, Miranda initially finds the perky southerner a bit wearing, but we see their closeness grow throughout the film. The key relationships are between Miranda and the guys. Phoenix and Mathis fell for each other on set, and their chemistry is evident. Bogdanovich notes that Phoenix had been anxious to kiss Mathis, and that comes through in their first romantic scene, which has an intimacy and a hunger that makes the relationship between these two characters, who often seem ill suited to each other, credible. In the relationship between Miranda and Kyle we get contrasts; longing in the way Kyle looks at her and warmth but, crucially, not passion in Miranda’s gaze.

The writing is strong, but the cast meet it with excellent performances (and, apparently, a fair amount of improvisation). River Phoenix may be top billed, but he’s actually a more minor character for the first hour of the film. James is cool and quiet, and closer than his friends to lasting success and that’s part of what Miranda is drawn to in him. River Phoenix was always charismatic, but here he finds a little more darkness than usual, an air of mystery that draws us in much the way it does Miranda. Phoenix also had issues in his personal life at this time, he would live less than a year after shooting. Apparently he showed up high on the first day of the film (though Bogdanovich says he never disrupted filming again after that). There are a few hints that the drugs were beginning to have more serious effects; always sharp featured, here his face seems thinner than ever, at times a little sunken. It makes him look older than his years, which works for the character, but there are moments he looks ill.

Whatever his offscreen issues, Phoenix is still dynamite on screen. He wrote one of the songs James sings and, like the rest of the cast, played and sung his own music, almost always live on the set. You can tell that he had experience as a musician and a joy in playing for a crowd, as we can see James’ darkness melt away when he sings. There’s nothing big in his performance, but the little things add up, just watch how James goes from annoying to charming on a dime when during an argument Miranda hands him a cheque made out to “selfish, arrogant dickhead”.

Samantha Mathis still works constantly, but to my mind never quite had the film career she could and should have. 1990’s Pump Up The Volume was a great calling card and 1993 should have been a brilliant year for her. Unfortunately Super Mario Bros. was a disaster (though not of her making) and while she’s wonderful here, too few people saw The Thing Called Love for that to matter. She kept doing good work, but it tended to be in small roles or films that never found a wide enough audience. However, Mathis anchors this film with a performance that, like Phoenix’s, is full of detail and charisma. More than that though, she’s someone you want to root for. We see her struggle to find songs but, from her first audition with an intentionally silly track called Big Bar Hair, which Mathis helped write, through to her last performance in the film, we watch her refine and grow into music, honing the basic talent she arrives with. Reportedly the least experienced musician before shooting started, Mathis nevertheless has a pretty singing voice and that final performance gets a lump stuck in my throat whenever I watch it.

For the first half of the film you could say that Dermot Mulroney is the male lead, and it’s likely we can all identify with the way Kyle has to watch and pine for Miranda while his friend gets the girl. Mulroney plays the nice, somewhat reckless, guy with great charm. We’ll get to another 1993 film that helped put Sandra Bullock on the map, but it was apparently this film that encouraged Jan DeBont to cast her in Speed the next year. It’s easy to see why. Linda Lue is a thin role; the quirky best friend, but Bullock, as well as having dead on comic timing, brings a certain sadness to the part as Linda Lue tries to figure out what she might be good at and starts a relationship with nice but dim Billy (Anthony Clark, who also gets more from his part than was likely there on the page).

Bogdanovich fills the film with memorable sequences, terrific music (often played live by guest starring country musicians) and a wealth of little details that resonate. One of these that recurs especially effectively is the use of the sign at the motel where Miranda stays, which displays a different quote from a country song each day, often in ways that seem to wryly comment on the scene. There is a looseness to the film that fits its subject and characters. The Thing Called Love doesn’t do anything wildly unexpected, but it is nice that it avoids the rags to riches cliches, and doesn’t entirely put a bow on its ending. This isn’t a film only for country fans, thanks to the smart screenplay and performances and to Bogdanovich’s beautifully pitched direction, his experience showing through in the subtleties of the camera movement and in his instinct for when to let his actors go and when to control the film more. If you’ve not seen this one, I highly recommend you seek it out; it’s one of 1993’s genuine unsung gems.