In my article for the BANNED! Series on The Toolbox Murders, I talked about how, when I was a kid, I wasn’t able to watch many films that I wasn’t supposed to be seeing. That was why I considered the 12 certificate – which came in in 1989, the first release being Tim Burton’s Batman […] 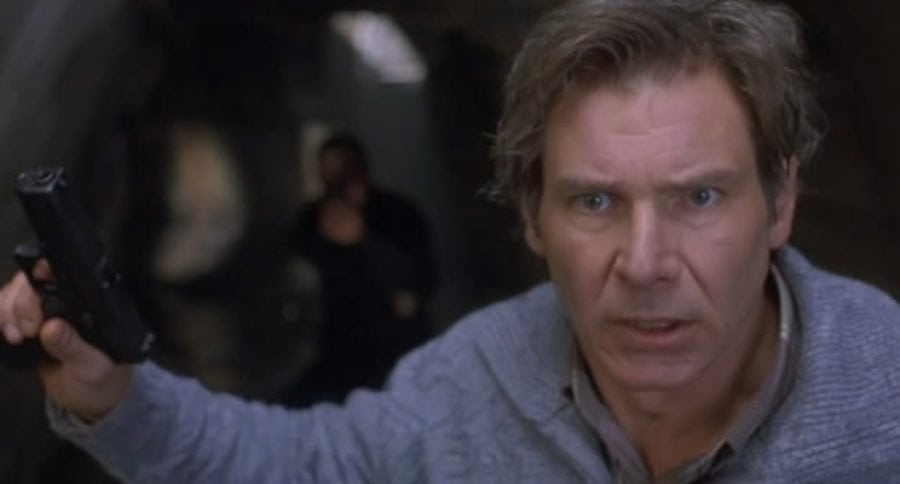 In my article for the BANNED! Series on The Toolbox Murders, I talked about how, when I was a kid, I wasn’t able to watch many films that I wasn’t supposed to be seeing. That was why I considered the 12 certificate – which came in in 1989, the first release being Tim Burton’s Batman – a great innovation. There had always been such a wide gulf between PG and 15, and it was ridiculously easy to fall into the higher category, it was clear the 12 needed to exist, much as the PG-13 certificate filled the same gap between PG and R movies in the US. The Fugitive was, at least as far as I can remember, the first 12 I saw.

I was vaguely aware that The Fugitive was based on a TV show but, at least for my generation in the UK, the show had never really been part of the culture, this wasn’t a Star Trek, so the film certainly had an easier time than many of today’s reboots or adaptations, as they take on characters the audience holds close to their hearts.

The basic storyline is the same as that of the series. Dr Richard Kimble (Harrison Ford) is convicted of the murder of his wife. When the bus transporting him to death row crashes, he is able to escape. On the run, Kimble is hunted by US Marshal Sam Gerard (Tommy Lee Jones) and his team, as he tries desperately to prove his innocence and find the one armed man he says committed the murder.

The Fugitive is incredibly tight. The story is set up early and clearly, after which the film is one of relentless forward motion; one of the great chase thrillers of the 90s (second only to Terminator 2). The extended credits sequence – the film’s first fourteen minutes – is particularly brilliantly condensed, it’s all exposition, but thrillingly delivered. In this brief first act we see the murder of Kimble’s wife, his interrogation (a semi-improvised scene, in that Harrison Ford wasn’t told what he’d be asked, so his reactions to the questioning would be more genuine), his trial and his conviction. Davis races through this material, but without us ever feeling lost. From there, the film only ramps up, with Kimble’s escape and the first hours of the race to recapture him taking us up to roughly the one hour mark without pausing for breath. Having set the pieces, though we’re sure they will come back in to play in more complex ways, Davis and credited screenwriter Jeb Stuart have earned this breathing room; time to focus on the chase.

In revisiting 1993, I have been finding that the films of that year feel further removed from today’s mainstream than I remembered. Today, I think The Fugitive would be a different film. Harrison Ford was 50 when the film was shot, which would now put him closer to the geri-action subgenre. I imagine there would be much more emphasis now on fighting and other action scenes. While its pace can be deceptive, The Fugitive only really has a couple of moments of action, at opposite ends of the film. The best remembered, justly, is the exceptional train crash sequence.While, obviously, Ford is green screened in to the shot, the biggest element of the crash was done for real. That’s a real bus and it is getting smashed by a real train. The remains of the vehicles used in the sequence can still be found where the scene was staged; Haywood Road in Sylva, North Carolina. Because the major element of the scene is so evidently real, the danger that Ford is in also feels real, but that’s only a moment of the scene. The early part of the  sequence takes place inside the crashed bus, and Davis delivers the mounting peril perfectly, with the train an unstoppable ticking clock. The scene feels cramped, dangerous and, though we know Ford has to escape so there’s a movie to watch, genuinely suspenseful.

For the most part, the film feels more influenced by 70s thrillers. A large part of the second hour of the film is given over to Kimble going through documents and computer records trying first find the one-armed man he believes killed his wife, then to piece together the conspiracy that saw him convicted. In between moments in which Gerard almost catches up to his prey the film is driven by suspense rather than action. This is carried over into the chase scenes themselves, from the famous first meeting of the characters inside a huge dam to the brilliant St Patrick’s Day parade sequence. The St Patrick’s Day sequence, which begins with Kimble visiting a prisoner to be sure he’s not the one-armed man he’s looking for and sees him cross paths with Gerard, who comes as close to catching Kimble as he has managed so far in the film, may be my favourite in the film. The build up is masterful, we know, as Kimble is visiting the prisoner, that Gerard is on his way but that he doesn’t know Kimble is there, so the suspense ratchets up and up. Then there’s the chase sequence; brilliantly cut (the film had six editors, so who did the work is a mystery) and clever in its use of a real event. The parade allows Kimble to blend into the crowd, just feet away from his frustrated pursuer and the moment that captures them in the same frame, just before Kimble vanishes, is one of the film’s best images.

The masterful use of suspense is also seen in a sequence that nods to the ending of The Silence of the Lambs, as the home Kimble has rented a room in is raided by Police. We’re supposed to think they are there for him and another chase is about to kick off, but it’s the son of Kimble’s landlady the cops are after.

As well as Davis expert orchestration of sustained tension, the film benefits from great performances from its two leads and an eclectic cast with more than a few faces who would go on to bigger things. In smaller parts, as doctors Kimble used to work with, are Jane Lynch (wearing LGBT supporting badges on her lab coat) and Julianne Moore. Moore was supposed to have a bigger role here, and many more scenes involving her as an emergency room doctor were shot but ultimately cut from the film, this would go some way to explain her high billing for just a few minutes of screen time. However, the work paid off for her, as some upstart director called Spielberg saw her, and cast her in the sequel to his 1993 movie about a dinosaur theme park, or something, on the back of this role. The team around Gerard form a little Greek chorus, they don’t all have a lot to do, but there is the sense of a group of people working as a tight little unit and pushing each other along. This comes through in scenes between Tommy Lee Jones and Tom Wood as Newman, the youngest on the team. After Gerard kills a man who is holding Newman hostage there is a very nice moment between them, tough but caring, as Gerard at once checks that the kid is okay and assures him that, dangerous as his tactics were, he’d repeat them. The most notable among Gerard’s crew is Joe Pantoliano, ever the reliable supporting player. His character Cosmo was due to die in the film’s finale, but Pantoliano talked Davis out of that, in case there was a sequel (which, though you’d be forgiven for forgetting, there was).

At its heart though, The Fugitive is a two hander; a battle of wills between two men seeking their own brand of justice. The system has done its job, Gerard figures, so it’s his to bring the man found guilty in. He’s utterly sincere in the film’s most famous moment, when Kimble says “I didn’t killl my wife” and he simply replies “I don’t care”. It’s easy to understand why, if Gerard had to ponder whether every guy who said he was innocent was actually telling the truth, he wouldn’t be able to do his job. That work is, he figures, for some other link in the chain. By the end, of course, we suspect that Gerard does, in fact, care whether Kimble is guilty, because he can see some evidence that he isn’t. It’s this that makes us able to understand and relate to Gerard, even if, because of our privileged knowledge that Kimble is, in fact, not guilty, we don’t actively root for him. Tommy Lee Jones won an Oscar for the role. In a field that included John Malkovich in In The Line Of Fire and Ralph Fiennes in Schindler’s List, Jones wouldn’t have been my choice, but there are few, if any, better versions of the no-nonsense persona that Jones often has on screen than the one he delivers here, and the role is a marked contrast to his previous collaboration with Andrew Davis; his gleeful turn as Steven Seagal’s nemesis in Under Siege.

If anything, I’m surprised that Harrison Ford didn’t score a nomination here. He buries the sardonic hero people love from Star Wars and Indiana Jones in favour of an altogether more inheld and downbeat performance. Movie stars often stick out like a sore thumb, and one of the keys here is that Kimble has to blend into the background; rumpled and dressed in neutral coloured thrift store chic, Ford manages this very well. Beyond that, he’s just brilliant in the part. Watch that interrogation scene and the way he processes the realisation that the Police are accusing him of murder, along with the way he decides to risk his freedom during a trip to the hospital, because a little boy needs help. That decision process is unspoken, but powerfully expressed.

Of all the films I’ve revisited from 1993, The Fugitive may hold up most completely, in that the way it works hasn’t altered in 25 years. It still hits me on all the same levels, the same moments remain my favourites (and least favourites, the ending still feels a little perfunctory). I still think it’s a great and, all told, one of the best thrillers of the 90s.