I have been finding many of the more political films I’ve been watching for this series more relevant than I’d like, and Romper Stomper, sadly, doesn’t feel like an exception in that respect. Neo-nazism is again on the rise, enabled and encouraged by the so called Alt Right. Much of this rise is online, but […] 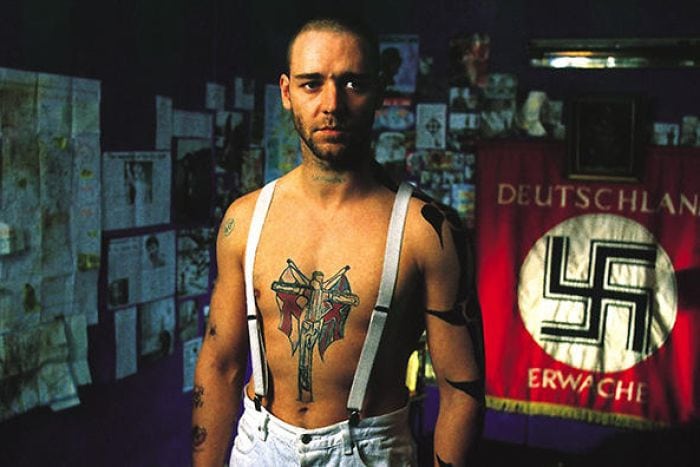 I have been finding many of the more political films I’ve been watching for this series more relevant than I’d like, and Romper Stomper, sadly, doesn’t feel like an exception in that respect. Neo-nazism is again on the rise, enabled and encouraged by the so called Alt Right. Much of this rise is online, but we have seen it, in the UK, in Charlottesville, and in Dylann Roof’s attack in Charleston becoming an ever more present and dangerous issue on the streets.

This atmosphere makes Romper Stomper both a timely and a difficult watch in 2018. Set in Melbourne, it’s a portrait of a neo-nazi gang led by Hando (Russell Crowe). The plot is minimal, but the gang repeatedly clashes with the Vietnamese immigrant community in their area and Hando and his best friend Davey (Daniel Pollock) argue over Gabe (Jacqueline McKenzie), a rich girl estranged from her abusive father who falls in with the gang.

Romper Stomper is, as it should be, an uneasy watch. It sugar coats nothing, offers no qualifiers, no backstory that would allow you to say ‘I don’t agree with them, but I see how Hando developed these views’. The gang’s politics are presented head on, in the vilest possible language. This harshness to the film’s tone is also felt in its every other aspect, violence and sex are presented in explicit and unblinking fashion. This remains the same whatever the direction the violence comes from. There are no heroes in the world of Romper Stomper, even the cops (only seen in one sequence) come across as another violent gang.

Challenging as this tone makes the film, it’s undeniably powerful. Most striking is the sequence that sees the gang go to their favourite bar when they hear that Vietnamese immigrants are there, handing out a harsh beating, before being chased down themselves by a group of friends of the people they’ve attacked. This sequence is about 12 minutes long and it’s unbearably intense, the violence and language are sickening, and it’s all heightened by the white power punk on the soundtrack (apparently written for the film, which is preferable to giving money to actual white power bands).

I think it’s the casualness with which the racist language and violence are meted out that is most disturbing and this is something I also felt in relation to Gabe. Early on, I expected her to be the film’s counterpoint, perhaps initially sucked in by an attraction to Hando, but eventually repulsed by his politics and his violence. Gabe is played as a vulnerable figure, and it’s sadly credible how easily she slips into, if not acceptance, then uncritical travelling with the gang’s viewpoints. One of the most quietly horrific moments comes when, lying in bed one morning, Hando reads to Gabe from Mein Kampf and she smiles up at him. She’s sucked in by his charisma, but that’s how she’s also going to be sucked in by the ideas.

It’s not hard to see why Romper Stomper signed Russel Crowe’s his ticket to Hollywood. It’s an incredibly intense performance that never once asks for sympathy, or even empathy. It’s a deep dive into a very dark mind. Geoffrey Wright’s screenplay is short on biographical detail for him or the other actors to work with, we understand Hando entirely through his beliefs and his place within the gang, and Crowe makes both of those things horribly credible. Shaven headed, lean, and covered in tattoos, Crowe’s physicality tells much of his character’s story. Crowe has a threatening energy even when he’s sitting down. We see this strongly in a dinner table scene when Gabe makes pasta for the gang, everyone’s eating it up but Hando. We know what’s coming, but even so, because this is food from another culture, there’s a tension around when Hando’s explosion is going to come. The threatened violence in Crowe’s presence is so strong that it carries over when we can’t see him, in close ups of the rest of the gang.

Jacqueline McKenzie has a tough job as Gabe, because we don’t ever quite get a handle on whether she’s initially interested in this philosophy at a deeper level or going along because she simply needs somewhere to stay and is attracted to the people around her, first Hando and the Davey. What’s great about McKenzie’s work is the fact that this feels like a confusion within the character rather than a result of an underwritten character. When we first see her it’s clear that she’s running short of options, something we come to understand even more clearly when she tips off the gang that they should rob her father’s house, and we get to understand some more of the history of that relationship. What McKenzie gives us is an effective combination of resignation and intrigue. Also excellent is Daniel Pollock as Davey. Davey is the one character among the gang who is afforded, however briefly, a chink of humanity when, having briefly split with the gang, he tells Gabe he doesn’t let his (German) Grandma know about his tattoos and badges, because she doesn’t know about his politics and it would upset her. What’s refreshing is that the film doesn’t then feel the need to turn this into a redemptive arc, instead it’s just a very specific and small moment where Davey is a person, rather than a cog in his racist group. Sadly, Daniel Pollock killed himself at just 23, Romper Stomper promised a lot, but it was his final film and he didn’t live to see it released.

Movies don’t create psychos, movies make psychos more creative, says the gospel according to Scream. Films have often been accused of inspiring crime or contributing to its causes. Some cases (the nonsensical one suggesting Child’s Play 3 contributed to the murder of James Bulger, for instance) have become infamous while others (the fact Jeffrey Dahmer would watch The Exorcist III and Return of the Jedi to set “the right mood” before going out looking for victims) are less well known. That threat was very much perceived about Romper Stomper.

There are two cases in which the influence of Romper Stomper could be said to be specific. First is that of Robert Stewart, who bludgeoned his cellmate, Zahid Mubarek, to death at Feltham Young Offenders’ Institution. He was of the racially motivated murder. Stewart had watched Romper Stomper two days before the killing, and he apparently modelled himself on Hando and on Alex DeLarge from A Clockwork Orange. The inquiry said he was a prolific letter writer, many of them with racist and violent content: “He sees himself in the correspondence starring in the film Romper Stomper as a racist thug attacking gooks”. Rather more ephemerally, there is the case of Dylann Roof, the killer in the church massacre in Charleston, who had a picture of Hando on his personal website.

These are both disturbing cases, but there is no suggestion in either that the beliefs of these racist criminals were founded by Romper Stomper, and nor do the specifics of their crimes correspond to anything seen in the film. The anti nazi league protested the London premiere of the film, and it’s not difficult to see why, because if you look at the film at a purely surface level, it never explicitly condemns Hando’s beliefs, it never puts those words in a character’s mouth. If you look even for an instant below the surface though, you’d have to intentionally misread the film to conclude that it’s anything but scathing in its condemnation of Hando and his gang. The first sequence, a brutal and unprovoked attack on some Vietnamese teens, feels like something out of a monster movie. Hando and his boys are animalistic, and the rest of the film, as I’ve mentioned, does little to humanise them. It shows them as a close knit group, but otherwise marginalised, living in squalor. It’s not anything to aspire to.

While Geoffrey Wright doesn’t shrink from the violence it never feels glamourised. The fights are ugly pile ons, not the choreographed dances of an action film and the violence is always shown to have consequence. With each violent action the gang are depleted, and in the sequence in which they are finally confronted by the Police there is one shockingly brutal moment that hammers home the gravity of those consequences. I am very comfortable in saying that one couldn’t go into Romper Stomper without virulent racist beliefs and come out with them.

Romper Stomper is a good film, maybe even a great one at times, but it’s a film you wallow in as much as watch. I found it, even as I admired it, actively unpleasant. I suspect that’s at least part of the goal, to make us look at these people and be repelled by them, to make us confront their language, their beliefs, their violence and feel we need a shower to wash the stain off ourselves. It’s brilliantly effective. So much so that I’ll never watch it again.