I remember Free Willy less as a film and more as a playground joke. Willy, you see, is British children’s slang for penis. The many jokes inspired by the potential misunderstanding of the title of – get this – a KIDS film were clearly the very apex of sophisticated humour. I eventually saw the film […] 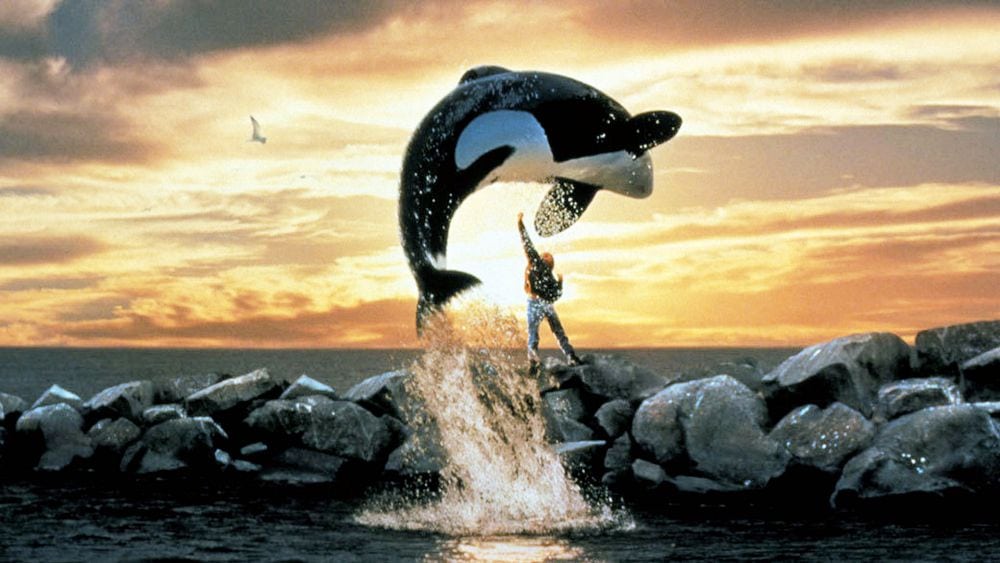 I remember Free Willy less as a film and more as a playground joke. Willy, you see, is British children’s slang for penis. The many jokes inspired by the potential misunderstanding of the title of – get this – a KIDS film were clearly the very apex of sophisticated humour. I eventually saw the film on video, I imagine it was rented at the behest of my brother rather than me, and that I dismissed it at the time as kid’s stuff. If I’m honest, I probably haven’t thought about it since.

Leaving aside how good or bad it may be as a film (though we’ll come to that) it’s difficult to know how to feel about Free Willy now. That’s largely due to the legacy of Keiko, the whale that played Willy (Keiko was also credited for the first two sequels, but apparently was largely replaced by an animatronic whale for both films). On the one hand, the film clearly has a positive message about rescuing animals from captivity, and includes the number for the Save the Whales foundation before the end credits (the foundation made $20 million in donations following the film’s release). On the other hand, there’s an inescapable sense that Keiko’s appearance in the film is part of his exploitation. It rings a little hollow that the villains in this film are villains because they want to profit from making an animal do tricks, but are saying that in a film which, however well intentioned, made $153.6 million in part by making an animal do tricks.

To complicate matters even more in this respect, the film led to a vocal movement to free Keiko, an effort that raised a lot of money, but seems to have been a limited success. Keiko was initially moved to a purpose built pool in Oregon, where his quality of life and his health were improved, but moving him to the ocean, which happened in 2002, was less successful. After many years in captivity, it seems Keiko never integrated with a group of whales, and that he would almost always seek out human contact. Keiko died in 2003, aged 27, about 18 months after being returned to the wild. The morals of all this are, to my mind, too knotty and contradictory to attempt to untangle here, but the story does give Free Willy a strange undertone in retrospect and trying to entirely separate that from the film can be a challenge.

Taken purely on its own terms, 25 years after it was released, Free Willy is fine. It is somewhat different to the film I remember it being,  the boy and his whale stuff is there, with training montages and swelling music and that triumphant poster moment when Willy jumps over Jesse (Jason James Richter) and he shouts “yeah”. Those things were what my mind had reduced this film to over the years, and to be fair to it, it does attempt to have a weightier plot than that. Jesse is about 12 and basically on his own, we don’t know what happened to his Dad, and his mother abandoned him years ago, though he’s convinced that she’ll come back for him in the near future. We find Jesse running with other displaced kids and committing petty crime. When he and his friends, running from the Police, find themselves under Willy’s tank, they graffiti it, but only Jesse is caught, so he’s the one who has to clean it up. As he goes through a fractious time trying to fit into his new foster placement with Glen (Michael Madsen) and Annie (Jayne Atkinson), Jesse finds that he loves working with Willy, but is worried about how his unscrupulous owners treat the whale.

The telling of this story is fairly simplistic. Every time something goes even slightly wrong, the script has Jesse throw another petulant strop, but to be honest, that’s not unrealistic in a 12 year old who doesn’t have this character’s background of abandonment and being shunted from foster home to foster home. The problem is that, at both writing and acting levels, there’s not much to distinguish one of these moments from the other, so there is a feeling of watching the same scene unfold over and over again. Jason James Richter is clearly doing his best, but he’s not the most sophisticated of young actors and he’s obviously working hard in these scenes, so they come off as acted. Much more satisfying are the moments that Jesse has to interact with Willy, here Richter makes Jesse’s enthusiasm and his love for Willy real and we do feel the freedom that Jesse is supposed to be putting across in these moments and therefore the urgency when Willy needs rescuing towards the end of the film.

It’s strange, just a year after he was seen dancing to ‘Stuck in the Middle With You’ before slicing off a cop’s ear, to see Michael Madsen in blue collar nice guy mode as Jesse’s potential adoptive Dad, but he’s pretty good. Everyone else does the best they can with somewhat thin roles. Jayne Atkinson has less to do than Madsen, but she’s a good counterpoint to the one moment that Glenn gets angry enough to let his frustrations with Jesse come out. August Schellenberg and Lori Petty are also effective as Willy’s trainers, who encourage Jesse in his interest in the whale, see potential in him, and end up as sort of surrogate uncle and big sister. Michael Ironside lacks only a moustache to twirl as the villain of the piece, but he’s Michael Ironside, it’s fun watching him be evil. The direction, like the screenplay, is functional rather than hugely inspired, but credit to Simon Wincer for the film’s final sequence at the very least. There is something that still feels iconic about Willy’s jump to freedom.

The words that keep coming to mind here are things like ‘well meaning’ or ‘good natured’. Free Willy is a perfectly nice film, and it’s generally quite well made. For me, most of it isn’t very memorable. I don’t have nostalgia for it from when I was a kid and it isn’t a film that holds up especially interestingly as an adult. That said, I can still see kids warming to it. I can see it being an inspiration. For a kid who loves animals, I could imagine this film encouraging them to fall in love with whales and to want to learn more about them. Whether that inspires them into marine biology or conservation or simply a deepens their interest in animals, that can only be a good thing. For me, Free Willy’s dramatic qualities might be the least important thing about it, but that’s because it has purpose and interest beyond them.