Sometimes Hollywood accidentally makes the same film twice in a very short space of time. Notable 90s examples include Armageddon and Deep Impact, Volcano and Dante’s Peak. CB4 came to US cinemas just a couple of months after Rusty Cundieff’s Fear of a Black Hat, another rap spoof featuring a documentarian telling the story of […] 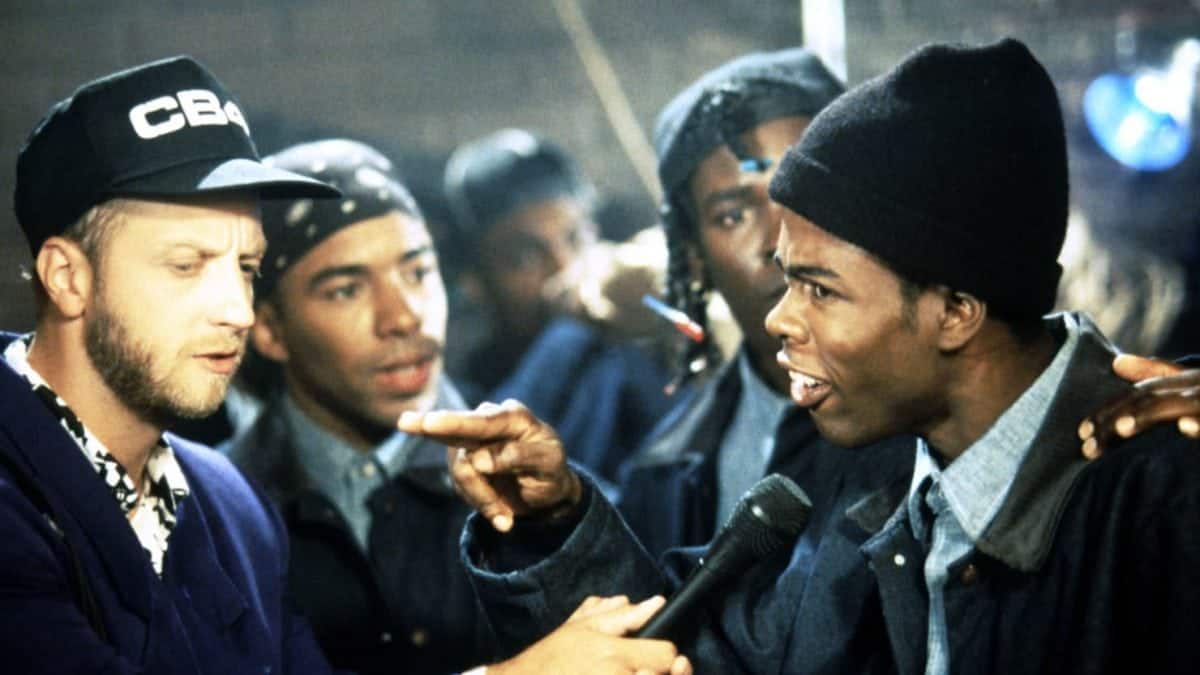 Sometimes Hollywood accidentally makes the same film twice in a very short space of time. Notable 90s examples include Armageddon and Deep Impact, Volcano and Dante’s Peak. CB4 came to US cinemas just a couple of months after Rusty Cundieff’s Fear of a Black Hat, another rap spoof featuring a documentarian telling the story of an NWA like group, played at Sundance 1993. That film would open in June 1994, but I’ll be referencing it here because the similarities and contrasts between the two help show some of the ways in which CB4, ultimately, disappoints.

CB4 is aimed for Cell Block 4, the NWA like group at its centre, composed of childhood friends Albert – or MC Gusto (co-writer Chris Rock), Euripides – or Dead Mike (Allen Payne) and Otis – or Stab Master Arson (Deezer D, who also appears in a minor role in Fear Of A Black Hat). Having tried several different rap personas, they go for a hardcore gangster image when local gangster Gusto (Charlie Murphy) gets arrested, and swears vengeance on Albert, who is accidentally caught up in the bust. The new image, and their hit Straight Outta Locash, makes them big successes, but with that success comes tension in the band, controversy, and an escaped Gusto trying to kill them.

What CB4 aspires to be is, essentially, This Is Spinal Rap. It uses the framing device of a ‘rapumentary’, directed by A. White (Chris Elliott) to tell the story. Elliot is amusingly clueless in the role, desperately trying to fit in with the group and their fans, coming off especially badly when he’s trying to use the same slang as they do in order to seem more part of the scene. However, the film frequently cuts away from this device, as Gusto relates the story of how the group formed and how he and his band mates differ from the image they put across.

Chris Rock is a funny man whose comedy, at its best, manages to combine focused political rage and hilarious punch lines, making you think as it makes you laugh (the still all too relevant ‘bullet control’ routine may be the best example). CB4 aims for some of the same effect. When it plays on the cliches of gangsta rap (already fairly well established by 1992, thanks to the influence of NWA’s 1988 Straight Outta Compton album) it does so by making many of the jokes about how white people perceive the music and about how executives, black or white, played up the hardcore images of their artists to play on that perception. This works especially well in the meeting where CB4 get signed:

Trustus [label boss]: Ok! Ok! Final question. Do you guys respect anything at all?

CB4: Not a goddamn thing.

Trustus: You got a deal.

There are funny moments in the way the film confronts this idea of image and perception. There is real potential set up with Phil Hartman, playing a congressman running for re-election and apparently down in the polls until, when he finds out his 12 year old son is a fan, he begins a campaign against CB4. There is plenty worth skewering in the political hypocrisy and opportunism that continues to mark many campaigns against things like rap music, video games and horror films. Phil Hartman was both a brilliant comedian and perfectly cast in the role but, sadly, the film sets this plot up and then doesn’t do a whole lot with it. It gets a couple of laughs, but never develops much momentum.

The songs are on point, with Straight Outta Locash, a transparent parody of NWA’s Straight Outta Compton, the easy highlight. Rock and Allen Payne both deliver their verses with force and style and the lyrics are well written, straddling the line of being just a little over the top while not being so extreme that you won’t believe that the band could exist. There aren’t that many songs aside from Straight Outta Locash though, and the only one that is anything like as fully developed is Sweat From My Balls, a sex rhyme tribute to Kool G Rap and DJ Polo’s Talk Like Sex. This, for me, is definitely an area where Fear Of A Black Hat comes off better. Not only are there more songs, they’re more fully written and the explanations that are given for why tracks like ‘Booty Juice’ are actually political allegories is an hilarious joke that delivers over and over, hitting a vein of satire that CB4 never comes close to tapping.

While CB4 doesn’t exploit the plot involving Phil Hartman’s politician to the extent it could have, that’s not to say it doesn’t have a plot, indeed, it’s almost overplotted, with the real Gusto’s pursuit of the band, and especially of Albert, weighing down the film’s last third. Charlie Murphy plays Gusto brilliantly. Apparently in his first audition he was told he wasn’t menacing enough, so he brought a loaded gun to his callback. There’s a good amount of that unpredictable energy about Murphy’s performance and he and his sidekick (Tyrone Granderson Jones) who speaks with an electrolarynx score some laughs, but the amount of plot in the last half hour does play down some of the comedy. 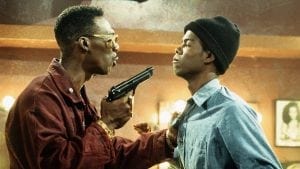 More successful are the little jokes that arise out of nowhere. The best of these comes early, when Albert and Otis go to find Euripides at his job. The people they pass while trying to find Rip all get laughs, and the joke involving him is delivered with hilarious nonchalance by Payne. Laughs also come from the ways the friends change when success comes their way. Again, Payne gets a lot of the best moments, as he finds political and spiritual awakening. His solo record, influenced by this, scores another of the movie’s biggest laughs.

If nothing else, CB4 is probably the most of its time film I’ve looked at so far in this series. It could only exist in the context of the early days of gangsta rap, and it relies on a fair amount of knowledge of the time and the music for some of the gags to land. It’s a film reacting to the controversy surrounding this music in the late 80s and early 90s, and its parody of both is on target. Whether it will play well to audiences that weren’t around at the time and don’t have that context for it, I don’t know. Certainly for me the jokes simply aren’t strong enough to carry it beyond its context the way Spinal Tap’s comedy continues to.

Overall though, I feel Fear Of A Black Hat executes almost all of these things better than CB4. Neither is perfect (some of Fear’s cultural parodies are gratingly on the nose), but when they cover the same topics – the politics behind some of the songs, the LA riots, the use of the documentary framing device, even the tension between the members of the group – Rusty Cundieff’s film almost always has the funnier gag. It’s rougher around the edges, but it hits its targets harder and more consistently. If you’re a fan of rap from this era then it’s probably worth seeing both films, but I’d recommend Fear Of A Black Hat over CB4.