Mental illness has, over the past few years, become more understood and easier to admit to. I’ve suffered with it myself (anxiety and depression) and know many other people who have or had their own struggles with various forms of mental illness. How movies deal with mental illness still often leaves much to be desired, […] 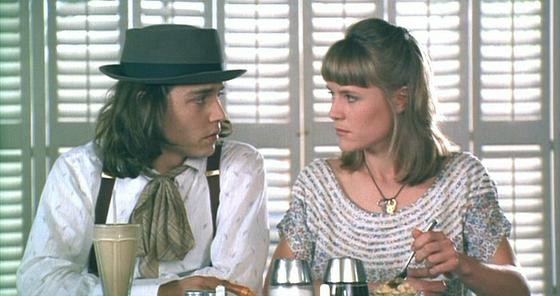 Mental illness has, over the past few years, become more understood and easier to admit to. I’ve suffered with it myself (anxiety and depression) and know many other people who have or had their own struggles with various forms of mental illness. How movies deal with mental illness still often leaves much to be desired, and that was at least as true, if not more so, back in 1993.

Benny (Aidan Quinn) and Joon (Mary Stuart Masterson) are brother and sister, living together in their thirties. The main reason for this is that Joon is ‘mentally ill’. Joon wants her independence, but isn’t capable of looking after herself day to day, and her frequent acting out has driven away many housekeepers who are supposed to look after her while Benny works. One night, over a game of poker, one of Benny’s friends bets Joon that if he wins the hand, she and Benny have to take his cousin Sam (Johnny Depp) off his hands. Sam is a childlike Buster Keaton obsessive, who seems to live in a daydream. Soon, he and Joon fall for each other.

One of the major problems, for me, in how movies regard mental illness is their lack of specificity. That’s why I said Joon is ‘mentally ill’ in inverted commas. The screenplay by Barry Berman gives her plenty of quirks (her regular breakfast of a peanut butter and Cap’n Crunch milkshake, for instance) and has her throw some unprompted tantrums (over Benny ‘cheating’ at ping pong), but it never engages, even in scenes with her doctor (the excellent character actress CCH Pounder), with what her condition actually is: autism, aspergers, bipolar, OCD? We never get clarity, so Joon becomes little more than a collection of cliches and quirks.

Another problem which hasn’t gone away, raising its ugly head most recently in Silver Linings Playbook, is the tendency to treat ‘mental illness’ as whimsical. In my experience, mental illness is anything but charming and magical but, through Joon and through Sam, that is overwhelmingly how this film treats it. Is it cute that Sam makes grilled cheese sandwiches with and iron? Is the visual of Joon wearing a snorkel and a mask while directing traffic with a ping pong bat a funny visual? Sure, maybe, but the film only briefly and lightly acknowledges any other consequences of either Sam or Joon’s problems. While you don’t want a mentally ill character to be entirely defined by their illness, and it’s great that Joon is shown as intelligent and having agency, the depiction of that mental illness still should be more than just ‘what silly/funny thing can they do next?’

For some time it seemed that Johnny Depp had become a movie star purely to have fun trashing the teen idol image he forged on 21 Jump Street. He threw himself deep into character, taking offbeat projects that outwardly resisted easy commercialism. Benny and Joon, while it bears vestiges of that actor, feels like the moment the first seeds of his post Jack Sparrow career are sown. While Depp is playing on his matinee idol looks as Sam, his performance is aggressively quirky, affected and mannered. That said, irksome as Sam can be, Depp’s typically committed work does save a few moments of the film, through the graceful physical comedy Sam has learnt through emulating his heroes; Charlie Chaplin and Buster Keaton. Depp delivers the slapstick in some beautifully controlled sequences, but those can’t entirely distract from the overall thinness of the character.

Depp, top billed and taking centre stage with his antics, is clearly the star of the film, but his is by far the smallest of the three lead roles. There’s a reason the film is called Benny and Joon, not Sam and Joon. As I’ve mentioned, Mary Stuart Masterson has a frustratingly under-detailed part as Joon but she does what she can with it. After making her debut, aged 10, in the first film of The Stepford Wives, Masterson had a relatively high profile career in the 80s and 90s, notching up notable roles in the John Hughes penned Some Kind of Wonderful and Fried Green Tomatoes, but she was always more character actress than movie star. Pulling all of Joon’s quirks together into something resembling a character couldn’t have been easy, but Masterson is affecting in the moments when Joon is finding control and able to express herself clearly and doesn’t overplay the sequences where her illness is more in control. Masterson and Depp play well off each other, their initial curiosity and shyness giving way to a sweetly played relationship. 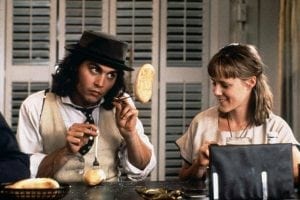 These two things are the key to the only passage of the film where, for about ten minutes, it dwells on the serious nature and effect of Joon’s illness. When she and Sam decide to go away together, Joon has an episode (it starts out as something like a panic attack, then escalates to something more manic), making the bus stop and eventually leading to her being hospitalised. For about ten minutes the film lives with the serious implications of this episode, but of course it soon gives way to a cloyingly feelgood moment with Sam and Benny breaking into the hospital, to magic Joon better with their presence. Because that’s how that works.

Aidan Quinn was not the original choice for Benny. Woody Harrelson had been cast, opposite Laura Dern as Joon. Harrelson dropped out in order to take the lead in Indecent Proposal – leading to a lawsuit – while Dern dropped out when she found out, even though she had recently been Oscar nominated and had the largest part in the film, she would only be getting third billing.

Benny’s role in his sister’s life is to be a grounding influence, to provide and to protect. The first part of this is also his role in the film. When Depp arrives to charm us with his quirks, Quinn is there to ground the drama. He does a perfectly solid job, you have no trouble buying him as a car mechanic running his own small business. It’s just that, especially next to Depp, Quinn is a dull, staid presence and the script doesn’t give him much to work with. Part of me thinks, sure, Benny’s a typical blue collar guy, but he could do with a little more personality, whether it came from the script or the performance. On the other hand maybe there’s something underlying this; a man whose personality and life has had to be subsumed because of his sister’s needs. You can see that a little in Benny’s tentative romance with a local waitress (Julianne Moore, a few years before her breakthrough), but even in those scenes, Quinn doesn’t really allow Benny to come to life, so it feels like I’m reaching to find something that isn’t there in the acting.

In what seems to be a recurring theme as we work through the films of 1993, Benny and Joon also boasts an excellent supporting cast, with character actors like Dan Hedaya, Oliver Platt and Joe Grifasi as Benny’s friends and William H. Macy putting in good work in another small part of the kind he did a lot of before Fargo gave him greater recognition a few years on. At the very least, even if Quinn’s performance is a bit dull, the actors around him give Benny and Joon a credible world to exist in.

I’m torn on this film. Masterson and Depp both do what they can with their roles and, apart or together, they never lack charm. Depp provides the film’s best moments with his comic dexterity and doesn’t go over the top. I dread to imagine what he’d do with this character now. However, they both deserve characters who are more nuanced, more realistic and better defined. The problems, for me, are all in the writing and Jeremiah Chechik’s anonymous direction. There’s a good film buried somewhere in here (and no, it’s not called Silver Linings Playbook), but it strikes me as one that was several rewrites away from being made.