In 1993, Falling Down probably looked like a reaction to the LA riots, events which had in fact happened during its shooting and forced it to move and delay certain scenes. Today it’s a strange watch; of its time in casting as much as politics, but those politics can also be seen through a variety […] 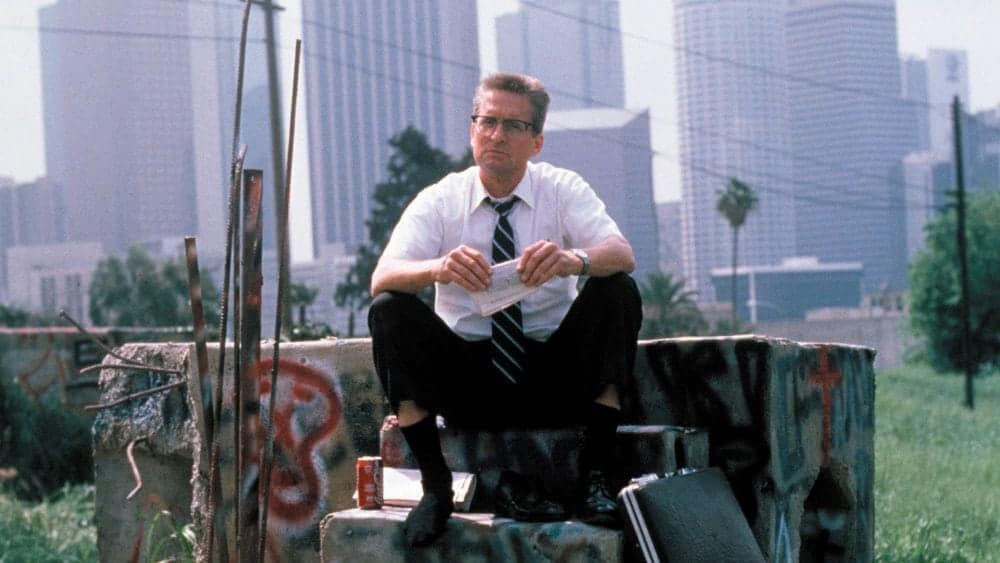 In 1993, Falling Down probably looked like a reaction to the LA riots, events which had in fact happened during its shooting and forced it to move and delay certain scenes. Today it’s a strange watch; of its time in casting as much as politics, but those politics can also be seen through a variety of contemporary lenses, depending on the audience.

The film casts Michael Douglas as laid off defence contractor William Foster, initially known only by his licence plate ‘D FENS’, who simply walks out of a traffic jam one morning. Foster is walking across LA, to the house he used to share with his ex-wife (Barbara Hershey) to see their young daughter on her birthday. The journey turns increasingly violent, as Foster’s rage boils over and his crime spree attracts the attention of a detective (Robert Duvall) on his last day before retirement.

Falling Down takes place on a very hot day in LA, and if there’s one thing that director Joel Schumacher gets right from the very beginning it’s that he visually gives us the feeling of that close, oppressive, heat. As the film opens we move through a long traffic jam to find ‘D FENS’. He’s essentially a man imprisoned, first by the traffic jam and then, even more closely, by his car. We’ll come to see that, while he feels he has to escape the car, it’s not the thing he’s come to view as the smallest prison in his life. Schumacher introduces his star in tight close up on his mouth; thin lipped, sweaty, a man already at physical boiling point. Everything is accentuated: the repetitive glow of a sign pointing out the traffic problems, the noise of a fly in Foster’s car, the sound of engines and honking horns. The opening minutes build to a cacophony in which we see why Foster has to find an escape, it’s like releasing the lid from a pressure cooker and allowing the air out. However, once he steps out of the car, little changes. The light around Foster still shimmers, distorted by the heat (and perhaps as he goes on in the day by his own perception) and he finds he can’t escape the building pressure.

2018 is an interesting time to be watching Falling Down for the first time in at least a decade. In the age of Trump and the Alt-Right it is in some ways more relevant than it’s been in years (though Foster’s politics don’t entirely or easily fit into those categories). In many ways Foster is a Daily Mail comments section made flesh. He’s a member of a privileged class: white, straight, middle-aged and, we assume to begin with, reasonably financially successful, but as an individual he’s not experiencing that privilege, so he lashes out, enraged by petty annoyances, his anger often directed at minorities. That said, it’s not quite as simple as that. For all that many of his actions (taking a baseball bat to the shelves of a Korean run convenience store whose prices he feels are too high, intimidating two knife wielding Latino gang members) could be seen as the stuff of Alt-Right wet dreams, Foster’s anger and violence isn’t defined by its politics, indeed his most violent attack – kept offscreen – is on an army surplus store owner who is abusive to two gay men shopping in his store and who turns out to be a literal Nazi.

Foster’s defining quality is selfishness. He’s painted by screenwriter Ebbe Roe Smith as a man who believes that he is the centre of the universe, and that it’s simply unfairness that he doesn’t have everything he wants. He’s frustrated in the traffic jam so he leaves his car, further inconveniencing the people around him. He doesn’t like that he can’t get breakfast in a fast food restaurant at 10:34, so he reaches into his bag of guns (picked up at the scene of a drive by, a revenge attack targeted at him by the latin gang) and holds the entire store hostage to his whims. More than that, the entire point of his journey is driven by his selfishness and entitlement. We never get the full details, but it’s clear from what we do hear, implication, and the way he speaks to her on the phone that Foster has a history of controlling and threatening behaviour and has been told to stay away from his ex wife and daughter. Today, along with making those phone calls, he’d probably be posting the same things on ‘men’s rights’ Reddit.

One moment that threatens to break Foster’s inability to see beyond himself, if only for a moment, comes when he passes by an African American man (played by the excellent Vondie Curtis Hall) who is protesting because he has been denied a bank loan because he’s “not economically viable”. The protester is dressed exactly like Foster, down to the pattern of his tie, and he folds those words “not economically viable” into his justification for his own actions. Does he empathise with that man, or is he simply co-opting his language? I’m not sure the film is clear on that, and there are probably good arguments for either interpretation. That’s what’s interesting about the politics here: the film clearly isn’t endorsing Foster’s rampage, it’s not presented, Death Wish like, as righteous vigilante justice for us to cheer, but it’s also not presenting him as an evil man as much as one who simply snaps.

The fact the film carries this balance off is largely down to the excellent leading performance from Michael Douglas. He seems to acknowledge all of his character’s flaws and at least attempt to understand the way he justifies them to himself. Foster is never less than sure of his own rightness, and Douglas plays that not with detachment but with a straightforwardness that is frightening. It’s an empathetic performance rather than a sympathetic one, an engaging portrayal of a toxic character. The rest of the cast are equally strong. Barbara Hershey is very good in the scenes in which she has to try convince Police that her ex is dangerous and that they need to treat his harassment of her more seriously. Also characteristically good is Rachel Ticotin, playing another ex partner, in this case the former work partner of Robert Duvall’s retiring detective. Ticotin, in the 90’s, delivered a series of strong performances as tough women in the likes of Total Recall, this film and Con Air, she never quite became a star, but I always felt she deserved bigger roles in more films and this is a good example of why. 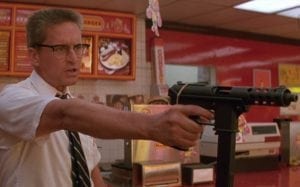 Of course, aside from Douglas, the cast’s main asset is Robert Duvall. It’s a fairly cliche part; the detective who gets caught up in a big case on his last day, and the plot point about him moving with his wife to the Lake Huvasu, Arizona, where the original London Bridge can be found, having been moved there brick by brick in 1967 is a weird one that clearly only exists to tie into the film’s title. However, Duvall brings soft-spoken assurance and gravitas to the role, at least when playing Prendergast purely as a cop. There is more nuance in his relationship with his wife (Tuesday Weld), whom he clearly loves, but is frustrated by having to deal with her extreme worrying about him and, it seems likely, her long term depression. In one scene we see him get angry with her over the phone; a glimpse, perhaps, of how he’s not so far from being a ‘D FENS’ himself? Douglas and Duvall only meet in the film’s final minutes, but it’s a beautifully played scene, with Prendergast trying to defuse this powder keg of a man by talking.

Writer Ebbe Roe Smith has worked extensively as an actor, but his only other feature writing credit is for the film of Car 54, Where Are You? in 1994. That’s a surprise, as Falling Down has an interesting screenplay and, more than that, provided a wide range of memorable roles for its supporting cast, be it Frederic Foster as the Nazi surplus store owner or Deedee Pfieffer and Brent Hinkley as Sheila and Rick at the Whammyburger that Forrest holds up. You’d have thought the offers would have come rolling in. Joel Schumacher has made some good movies (Tigerland, Phone Booth and his John Grisham adaptations, The Client and A Time To Kill among them), some bad ones (Batman Forever, 8mm) and some absolute howlers (Batman & Robin, The Number 23), but Falling Down is a real standout in his work. The performances are among the best he’s drawn from actors and he creates a real atmosphere of heat and pressure throughout. It’s tough to know how to feel about it politically now, but that’s perhaps one of the main reasons it remains interesting and provocative.