By James Mackney Films about artists and the process of creating art, especially portraiture, can be a risky prospect. There is a fine line between creating an engaging piece of cinema and with that of making the audience feel like they too are sitting in the subject’s chair for hours on end. Stanley Tucci has […] 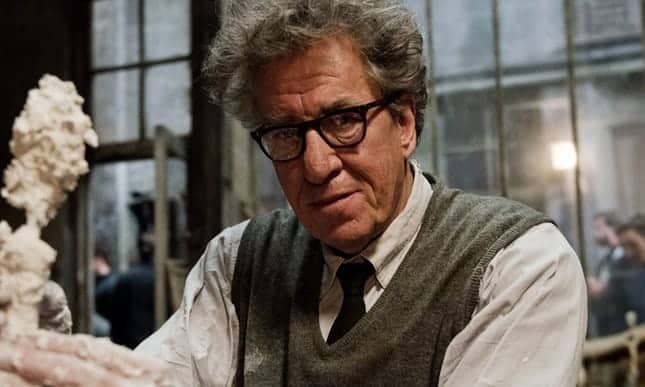 Films about artists and the process of creating art, especially portraiture, can be a risky prospect. There is a fine line between creating an engaging piece of cinema and with that of making the audience feel like they too are sitting in the subject’s chair for hours on end.

Stanley Tucci has created a chamber piece, focusing on one of the final works of Swiss-Italian artist, Alberto Giacometti (Geoffrey Rush). The subject of the artist’s final portrait is American James Lord (Armie Hammer – charming and adds exposition when needed), whose memoir of the events forms the base of the film.

The opening to the film is near silent with Rush shuffling around his cluttered and chaotic studio with the camera holding for long takes that allows the film to take on a theatrical quality. Tucci has tread the boards many times during his career and the effective ultilisation of space and time, giving the film an almost thriller quality, is a clear indication of his tenure.

Rush’s performance holds the film together with his apparent apathy for anything that is not work, alcohol or his prostitute muse. Giacometti’s wife (Sylvie Testud) is neglected by Rush throughout most of the film in favour of his open relationship with a prostitute, played by Clémence Poésy. Poésy’s performance is indebted to classic Nouvelle Vague portrayals of female characters, so much so, that in one scene where the three main characters take a drive into the countryside one can’t help but picture about Godard’s, ‘À Bout De Soufflé’.

The film diverts away from the traditional representation of the ‘tortured’ artist trope by focusing more on the conditions in which Giacometti chooses to operate. Giacometti is presented as a successful artist but one that constantly lives in a world of barely organized chaos. Rush’s performance completely buys into this and the film clearly attempts to show that despite the chaos, Rush is the one holding all of the pieces together. He often becomes frustrated with his own work, letting our barked expletives at the perceived hopelessness of the work he’s created. Armie Hammer’s Lord has to sit through days of work only to feel as if no progress is being made, a sentiment with which I could empathise.

Final Portrait offers the idea of satisfaction and contentment being the enemies of art with Giacometti disregarding happiness and contentment as stimulus for his work, shown in the way he meticulously structures (seemingly unapparent to those around him) his environment for his art to flourish at the expense of those close to him.

Tucci’s direction is serviceable but repetitive and it robs the film of its moment. Danny Cohen’s use of colour in the cinematography switches between washed out greys and soft yellows, to reflect characters moods and moments of inspiration and this is coupled with unnecessary hand held camera movements, meaning the film can feel jarring.

The film is a fine attempt to gain insight into an artist and his methods but the film cannot shake off its reliance on being both stagey and talky and when the final portrait is completed you are left with a feeling of emptiness due to not having cared enough about the central questions of the film.

Final Portrait is in cinemas from Friday 18th August.