★★★☆☆ In Netflix drama Uncorked, a young man named Elijah (Mamoudou Athie) finds himself caught in a crossfire between his dream of becoming a master sommelier, and his father’s expectation that he will someday take over the family barbecue business. It’s a familiar tale about the clash of family traditions and individualism, with director Prentice […] 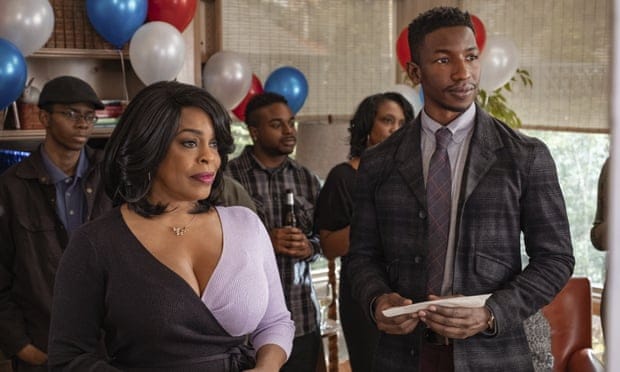 In Netflix drama Uncorked, a young man named Elijah (Mamoudou Athie) finds himself caught in a crossfire between his dream of becoming a master sommelier, and his father’s expectation that he will someday take over the family barbecue business. It’s a familiar tale about the clash of family traditions and individualism, with director Prentice Penny delivering this tried-and-tested formula within a new context. Admittedly, the film falls squarely middle of the road, but it has a smart story that shows an appreciation for black American culture.

Most of the film rests on the shoulders of Elijah, who is trying to find his purpose. He’s drawn to the wine world, but his father Louis (Courtney B. Vance), shuts down suggestions of him doing anything else other than taking over the family business. Louis seems to want the final say on his son’s future, but Elijah wrestles to break out of a path that appears to be predetermined. With the support of his mother Sylvia (Nicey Nash), Elijah makes it his goal to become a master sommelier, even if that means rocking the boat in the process. It’s an age-old story about “following your heart” and in the hands of Penny, we’re given a movie that’s full of humour, humility, and life lessons – and it’s hard to dislike, though it never quite fully grabs your attention. There’s clear talent involved, matched by an affectionate script, but the film lacks a greater motivational thrust that helps you better understand Elijah’s ambitions.

Having said that, nothing is particularly bad about Uncorked. It moves at a lurid pace, inviting the audience into the lives of these characters with natural ease. The film has good actors, great music, and excellent cinematography, but there’s not enough spark to make it truly come alive. It’s smooth, safe, and the kind of movie that warrants viewing on a lazy Sunday. However, there’s a worthwhile journey at the heart of Uncorked. Through it all, Penny explores a push-and-pull dynamic between Elijah and Louis, and gradually they begin to unite, as Penny becomes more interested in bringing them together.

Penny clearly has a knack for small, intimate storylines, that deliver inspiring messages. He stages Uncorked as a film that tackles various societal pressures around ambition, money, and family tradition, of all which are admirable themes. The savoury moments, however, are few and far between, and Uncorked remains a movie that could be best summed up as bang average. But at least Uncorked convinces you to be adventurous, to buck the trend, and yes, to lose yourself in the world of wine.