A decade after winning the Palme d’Or for his film The Class, director Laurent Cantet brings us apolitically engaged look at France’s disenfranchised youth. Set in the coastal town of La Ciotat – the place where the Lumière brothers filmed a moving train and invented cinema – The Workshop centres around a summer writing class. It is led by novelist Olivia (Marina Foïs) who […] 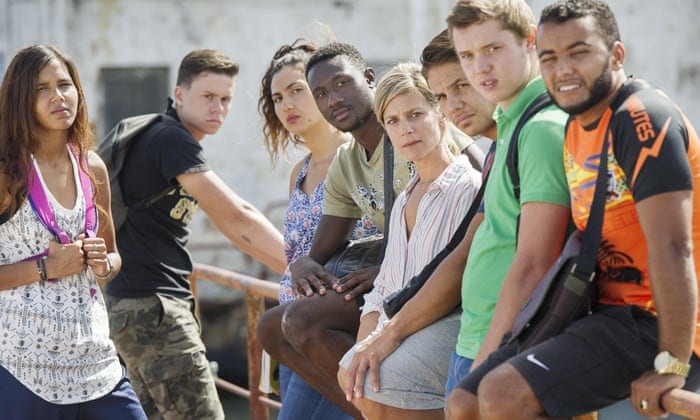 A decade after winning the Palme d’Or for his film The Class, director Laurent Cantet brings us apolitically engaged look at France’s disenfranchised youth. Set in the coastal town of La Ciotat – the place where the Lumière brothers filmed a moving train and invented cinema – The Workshop centres around a summer writing class. It is led by novelist Olivia (Marina Foïs) who organises discussionsamong the young adults who attend the group. The aim is for the attendees to write a crime novel and Olivia helps them explore what the book will look like.

Cantet and co-writer Robin Campillo do a good job of letting each character speak for themselves. The dialogue is detailed and specific and at no point feels like it is generalising or dismissing the students concerns. There is something heartening about Cantet’s belief that debate and the exchange of ideas can be a thrilling bedrock for a film.

Much like The Class, there are extended scenes where students discuss their thoughts for the novel and in doing so reveal details about their lives. Antoine (Matthieu Lucci) is the most outspoken and is not afraid to voice his more extreme opinions. He watches racist speakers online who rage about E.U. bureaucrats, globalization, and the increasingly diverse face of French culture. Antoine lacks direction and purpose in his life and his search for meaning has led him down undesirable avenues.

The presence of La Ciotat’s disused docks lingers over the film and casts a shadow over the town. It once shaped the local community and the lives of its inhabitants but now represents the loss of hope and purpose. The workshop acts as a forum where its young attendees can discuss their experiences and begin to envision what their lives could be. Work brings meaning to our lives and gives us a sense of identity, whether we are writers, filmmakers, or dockworkers. It is the void that its absence creates that allows destructive and hateful feelings to grow. The presence of the luxury yachts in the harbour only emphasises how the world has changed and the students have been left behind.

At the same time, the film is open about the difficulties of discussing and representing issues of class and racism. Olivia’s fascination in Antoine is partly derived from fears for his safety but also comes from a desire to understand viewpoints and experiences that she has been sheltered from. Olivia’s position of privilege makes Antoine a person of intrigue that can be used to flesh out her latest novel.

Their interactions raise an important question: can an artist who is sheltered from issues of class and racism truly understand and depict them? Olivia can look for reasons – loneliness, desire for belonging, lack of prospects – why Antoine is attracted to xenophobic groups and ideas but she is unable to understand the experiences and mindset that form them.

Whatever the answer, Cantet does a good job of debating these topics and probably wisely leaves us to come to our own conclusions. The Workshop may not have the same kinetic energy of The Class, but is remains a thoughtful and timely look at France’s overlooked generation.