After a horrific accident at a rodeo competition, Brady Blackburn (Brady Jandreau) must deal with his brain injuries and a life of mediocrity in rural South Dakota. I had the pleasure of speaking with Brady Jandreau prior to seeing The Rider, and it was a relief that director and writer Chloé Zhao was able to bring his […] 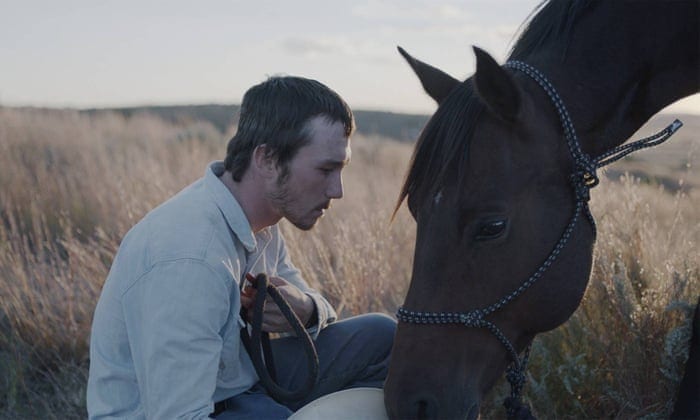 After a horrific accident at a rodeo competition, Brady Blackburn (Brady Jandreau) must deal with his brain injuries and a life of mediocrity in rural South Dakota.

I had the pleasure of speaking with Brady Jandreau prior to seeing The Rider, and it was a relief that director and writer Chloé Zhao was able to bring his humility and authenticity to the screen.

Jandreau gives a powerful performance in this dedicated character study, which often so closely reflects his own affinity with horses. That there seems so little to do in this part of the world is smartly and not excessively played against the intense excitement of riding a bucking horse, and its painfully clear how hard it is for Brady to watch his peers continue to do what he was once renowned for.

This quietly engaging work reminded me of two other directors: like the early films of Andrea Arnold, The Rider is able to use authentic actors to dive into the worlds of the working poor and inhabit it without condescension or cheap shots. This is also a movie by a woman that respects and explores a masculine environment, something Kathryn Bigelow has built her career around.

Jandreau’s own father and sister play his onscreen family, treating his newfound stasis with a mixture of contempt and bemusement. Reminding him that he was lucky to only have a plate in his head is visits to Lane Scott, a semi-fictionalised figure of the real Lane Scott who was left paralysed and speechless by a serious rodeo accident.

Perhaps unsurprisingly the acting is clunky or overly mumbled at times, but there was no way it could have worked if not inhabited by Brady’s real family, real rodeo stars, the real Lane Scott. This is a work to make us understand a neglected community, in that sense as much inhabiting documentary ideals as narrative fiction.

The beauty of the Badlands is something else that Zhao captures well, with the endless plains now as much trapping Brady as freeing him. The environment is both colourless and filled with detail, utilised in both character close-up and a not excessive use of long shots capturing the plains.

Characters all unto themselves in The Rider are the horses, and Brady’s relationship with them defines him as a character. They define his own nature, both in placidity and bubbling furies. Perhaps the most arresting scenes of all come when Brady interacts with horses in any way he can, notably a scene in which a tempestuous animal must be broken in.

If there are any criticisms is some of the plot points are laid on a little thick. First it’s the callousness of his father that keeps Brady down, it’s also the lack of opportunity, the failure of his rodeo buddies to understand his new lot in life. If Brady had been to visit his real-life brother in jail (this was planned, South Dakota penitentiary wouldn’t allow it), conversely this sensitive production could have found itself skirting melodrama. As it is it’s a film that manages to capture a ‘forgotten America’ that in spite of everything still sometimes seems as forgotten as ever.