Dominic Savage delivers a noble if somewhat tepid character study of a desperate housewife in The Escape. Tara (Gemma Arterton) is a married mother of two.  She lives in the quiet, dull rabbit hutches of suburban London.  It is a lonely existence, and despite her family, she is isolated.  Her husband, Mark (Dominic Cooper), is […] 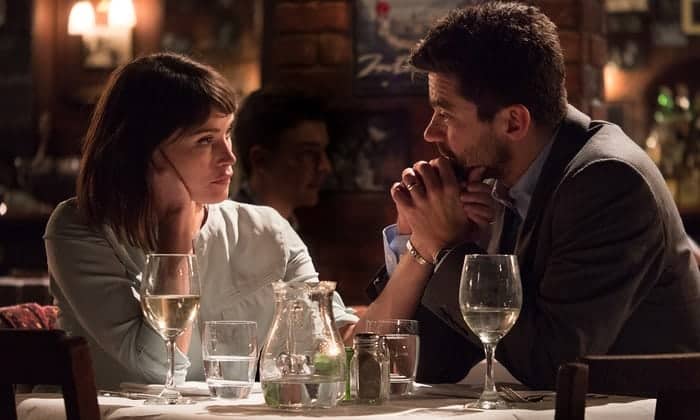 Dominic Savage delivers a noble if somewhat tepid character study of a desperate housewife in The Escape.

Tara (Gemma Arterton) is a married mother of two.  She lives in the quiet, dull rabbit hutches of suburban London.  It is a lonely existence, and despite her family, she is isolated.  Her husband, Mark (Dominic Cooper), is the self-absorbed breadwinner, a man blind to his partner’s immeasurable unhappiness.  For Tara, life is a cycle of monotonous routine, the school run, the weekly shop, meal preparation and laundry, punctuated by loveless, often quietly tearful sex.  The suffocating grip of Tara’s existence slowly tightens with each passing day and the anxiety that her life may be slipping through her fingers grows.

We follow Tara over the course of several days, but what unfolds before us as the young mother contends with herself, is the product of years of mounting depression.  Tara’s battle is a private one, derived from the fear of her husband, the weight of expectation and her hollow sense of self and lack of fulfilment, all compounded by Mark’s inability to understand her struggle.

What’s most interesting about The Escape is the line it takes.  Savage, rather than peg the film as a woman’s desperate attempt to escape her terrible life, takes the time to explore the complexity behind it.

Fleeting moments underpin the importance of communication.  And, whilst there is no excusing Mark, an emotionally abusive and manipulative man shaped by the traditional patriarchal model, Savage is deliberate in focusing on a relationship that suffers from a breakdown of communication from both parties, showing us how difficult and necessary it is to talk.

When Tara seeks solace from her mother only to be told that she is going through a phase, any glimmer of hope is quickly shut out.  A breakfast argument is the final straw, and Tara hastily packs up and flees for Paris.

Developing the story over the course of a year with Arterton, Savage’s final script was a 30-page treatment that encouraged the actors to improvise their dialogue and explore narrative directions.  This is felt throughout the film, and at its worst smears The Escape in a thin coat of contrived self-indulgence.

Arterton’s performance exists in the grey space that actors often find themselves when confronted with characters such as Tara.  Does she play her with the pained restraint of a screen pro, or is it just a lot of wide-eyed, mournful looks? Perhaps, it is somewhere in the middle.  A scene in which she loses her temper with her children before quickly being swallowed by the melange of fear and “oh my god, what have I done” holds a particular power, and is carried superbly by Arterton.

Everything works in The Escape, or more accurately, nothing doesn’t work.  Savage has crafted something that comes together neatly with no jagged edges.  Performances, for the most part, compliment script and style. The film is shot in tight medium close-ups, and the camera moves with fluidity.  But it feels flat, and the subject appropriate dreariness extends beyond the situation and the character’s lives. Playing with improvisation means some scenes linger unnecessarily as a result of the process.  And, from Tara’s arrival in France, everything quickly descends into predictability.

Still, Savage does well to capture in moments the weight of Tara’s emotional battle, her unhappiness, frustration, and her desperate attempts to carve out a piece of life for herself.