In eyes of Guillermo del Toro, ‘monster’ is a relative term. So when Richard Jenkins’ Giles, our nominal narrator, tells us that The Shape of Water is a story “of love & loss, and the monster who tried to destroy it all,” it would be unwise to assume that the antagonist he refers to is […] 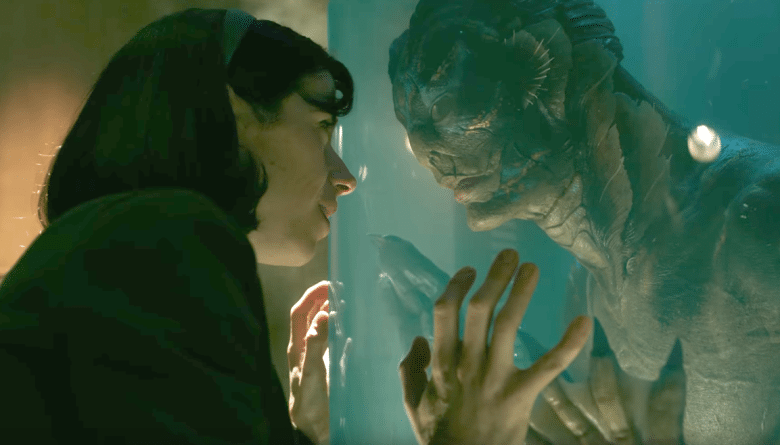 In eyes of Guillermo del Toro, ‘monster’ is a relative term. So when Richard Jenkins’ Giles, our nominal narrator, tells us that The Shape of Water is a story “of love & loss, and the monster who tried to destroy it all,” it would be unwise to assume that the antagonist he refers to is the piscine humanoid at the heart of this otherworldly fable.

The latest offering from del Toro’s beloved cabinet of curiosities, The Shape of Water is a rich and extravagant retro fairy tale; a classical romance that’s possessed with mystery, and bewitched by magic. The setting is Baltimore in the early 60s – in the background, the Cold War rages on. Elisa (Sally Hawkins) is a mute, living in a dank, dingy apartment above a movie theatre. Many days she spends in the company of her neighbour Giles, a struggling gay artist with a penchant for watching old Hollywood musicals. While in the evenings she works as a janitor, hired to clean the corridors of a top-secret government laboratory.

As well as Giles, Elisa has a close friend in Zelda (Octavia Spencer) – a fellow custodial, who helps to translate Elisa’s sign language for others at the aforementioned facility. And yet while she may be able to express herself, Elisa never truly connects with anyone. That is until she comes into contact with an amphibious anthropoid (brought to life with soulful wonder by Doug Jones), captured in South America and secretly brought to the lab for classified testing. Despite the creature’s inherently inimical temperament, the two soon form a secret bond; her tender disposition the perfect foil to his hostile nature. Threatening to disrupt their gently flourishing love, however, is a belligerent security agent (Michael Shannon) who cruelly resents the creature’s existence, and an imbedded Russian agent (Michael Stuhlbarg) who has his own plans for the Amphibian Man’s future.

Despite inhabiting a number of dull, colourless interiors here, del Toro’s innovative sense of imagination continues to shine through. The cineliterate auteur not only draws characteristic influences from Jack Arnold’s Creature from the Black Lagoon – a prominent touchstone– but also takes clear inspiration from the passionate dreamscape of Jean Cocteau’s La Belle et la Bête – discernable, particularly, in the lilting mysticism of Alexandre Desplat’s score – and the playful tone of Jean-Pierre Jeunet’s work: Hawkins’ strong-willed heroine sharing a similar sense of whimsy to that of Audrey Tautou’s Amélie.

Elisa is a bright, independent woman, with a liberated sexual attitude, and a wide-eyed curiosity towards the world around her – Hawkins’ performance so spirited, and so strikingly expressive without ever uttering a single word. But she’s also symbolic of those who were marginalised by mainstream society in past, and indeed those who remain sidelined today. Elisa is isolated, just as Giles and Zelda are, by the callous disregard shown to her by her peers – a devastating reality for many that del Toro, and his co-writer Vanessa Taylor, carefully ensure isn’t diluted by the film’s fantastical sensibilities.

It’s a film that’s at its best when sharing in the reactions and feelings of these central characters. There’s a heartbreaking honesty to their pain, and reverential warmth is felt in their moments of strength. Yet in spite of its soaring heart, there soon comes a stinging sense of complacency that’s sadly so familiar in del Toro’s work. The shifts in genre feel inelegant, particularly as the narrative spills into the territory of a B-movie thriller, which comes complete with smoky noirish tinges, and a distractingly overwrought performance from Shannon, playing the proverbial ‘monster’ of the piece.

In the romance too, we glean a self-satisfied air that partially undoes the phenomenal work of Hawkins and Jones – the plot so busy, and laden with so many ideas that their relationship is never afforded enough space, and enough emotional intimacy to feel true. But though it may all be a little damp, one can’t help but be left in awe by The Shape of Water’s enchanting beauty, and Hawkins’ mesmerising presence. So compelling is this film to gaze upon, you almost begrudge having to come up for air once the credits begin to roll.