From the outset it is clear that The Ritual has ambitions to be more than just another tired and predictable horror film. Following the death of their friend Robert (Paul Reid), a group of university friends, now in their early thirties, forgo the traditional boys holiday and instead go on a hiking trip to Sweden […] 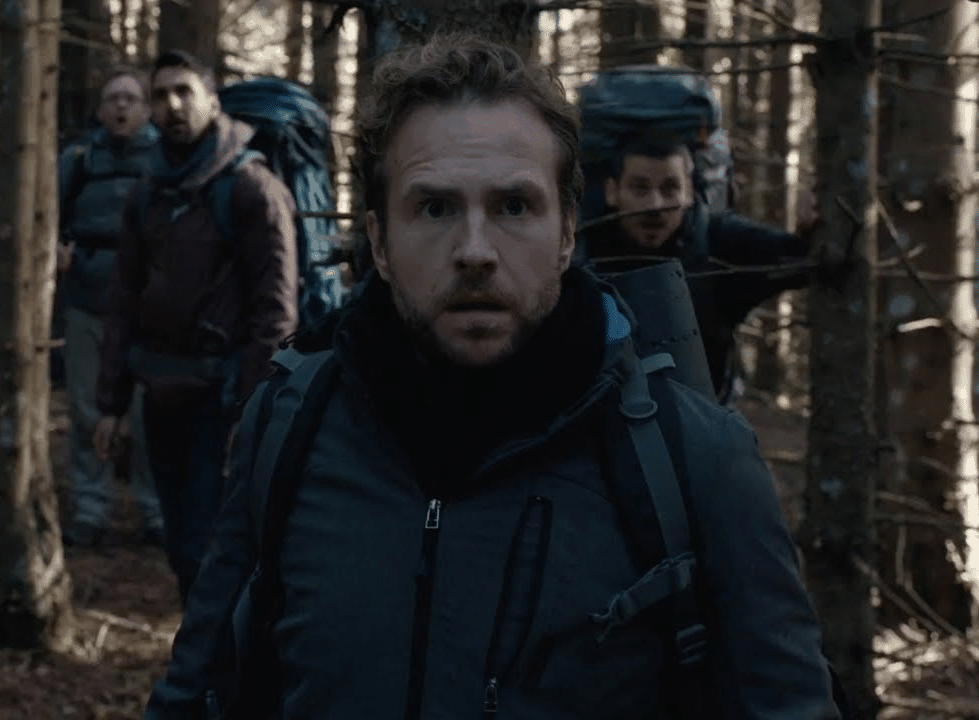 From the outset it is clear that The Ritual has ambitions to be more than just another tired and predictable horror film. Following the death of their friend Robert (Paul Reid), a group of university friends, now in their early thirties, forgo the traditional boys holiday and instead go on a hiking trip to Sweden as their late friend had suggested. Luke (Rafe Spall), who was present when Robert was killed, is still troubled by guilt and has recurring nightmares about the event.

The trip starts without incident, but inevitably the least athletic member of the group Dom (Sam Troughton) hurts his knee. Needing to get to the local lodge as fast as possible they abandon their original route and decide to take a shortcut through the forest. Before long they begin to regret their decision as they are hunted down by a large deer-like Nordic monster.

What starts out as a flawed but interesting psychological thriller about loss and regret quickly regresses into a more typical hidden monster horror film. There are signs that conflict between Robert and the rest of the group may have developed following their friend’s death but before this storyline can reach its dramatic climax the film turns its attention to the monster and this part of the plot is for the most part forgotten.

David Bruckner, who has previously co-directed The Signal and Southbound, is able to effectively build tension and an eerie tone. There are several scary moments that help the film fill its horror quota. The cinematography from Andrew Shulkind is generally good and he makes the most of the fog that rises from the trees. The forest feels real and there are times when, like the hikers, you feel soaked by the rain.

The script is serviceable but it could definitely have been fined tuned to remove the odd awkward moment. Considering that the novel by Adam Nevill from which the film is based was well received, it is fair to expect more from the script in terms of dialogue and narrative development. There are a number of clunky conversations but it is the general ineptitude of the hikers that is most frustrating. No matter what situation they find themselves in, they uniformly refuse to use any common sense or navigation skills. Despite having the most expensive hiking equipment you can purchase from your local high street they repeatedly decide that their own intuition can be relied on more than compasses and maps. When hiding from the monster in the dark forest they also decide that the best way not to be found is to shout and flash their torches in all directions.

The Ritual may reject an interesting initial premise and devolve into a fairly standard horror film but it still manages to be scary and engaging enough to hold your attention. With competent writing and admirable direction it manages to be a better than average, if unremarkable, horror film.