2045 AD. The deceased James Halliday (Mark Rylance) has left his massive fortune inside his defining creation: OASIS, the massive virtual universe people use to escape from the crumbling real world. Halliday left clues on how to inherit his worth that are related to his own insular upbringing, so only the most obsessed with 80’s […] 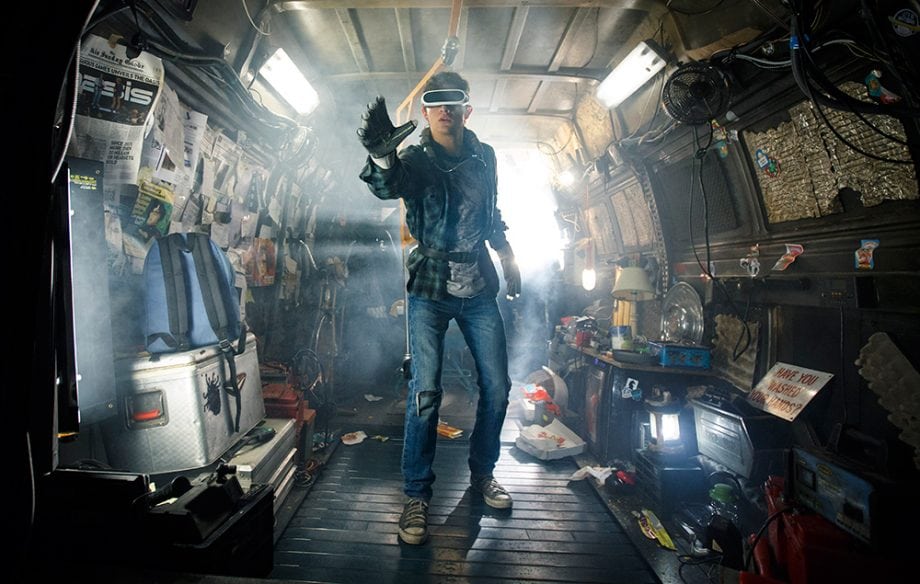 2045 AD. The deceased James Halliday (Mark Rylance) has left his massive fortune inside his defining creation: OASIS, the massive virtual universe people use to escape from the crumbling real world. Halliday left clues on how to inherit his worth that are related to his own insular upbringing, so only the most obsessed with 80’s video games and films will find the needed ‘Easter egg’. It is up to the ordinary ‘gunters’ to find it before the monopolistic IOI, who will ruin Halliday’s utopian vision for good.

The promise of a paean to nerd culture is certainly fulfilled in Ready Player One, but this is in the context of an overloaded plot and characters that never extend beyond the good vs. bad binary. The film’s effects are impressive and forward thinking to a typically Spielbergian level, but the stakes at the heart of the OASIS are beset by this at its core being a video game world.

Based on the book by Ernest Cline, this is Steven Spielberg’s biggest non-sequel blockbuster since Jurassic Park. Why he chose the source material is immediately obvious: not only was the book a big hit on its 2011 release, but it’s lead ‘gunter’ Wade Watts (Tye Sheridan) has an obsession with the culture of which between Close Encounters, Indiana Jones and E.T., Spielberg himself was a defining figure (he’s mentioned in the book numerous times).

The soundtrack is huge fun, and anything playing a fight scene to New Order has a thumbs up in my book. The score, however, is way overdone, almost as bludgoening as characters explaining things twice (‘a quarter, twenty five cents’). Of note in the reference overload is that there is nothing from Disney, and by extension Marvel or Star Wars. No-one forced them to collaborate with a competitor, but it does feel like sour grapes on their part.

In terms of performances, everyone does what they can with the material. The only standout is Mark Rylance as Halliday, who nails the awkward asocial pioneer of the book. The YA perspective of Wade is never fully explored onscreen, which takes an anchor away from the film’s action.

The visuals of the OASIS can be phenomenal, my eyes darting a hundred different ways in the IMAX. A virtual disco scene stood out, Parzival (Wade’s online alter-ego) and Art3mis (Olivia Cooke) floating amongst each other to the sounds of ‘Stayin’ Alive’. The races and conflict can be a CGI overload at times. The issue of the unlimited imagination of this world is akin to playing tennis with the net down: without rules, structure and story are threatened.

Changes from Ready Player One the book are different if not any particular improvement, such as a Nicholson-free The Shining world instead of a War Games simulation. While references to ‘camper moves’ and ‘the bandwidth riots’ made my eyes roll, there were at least less allusions to Marie Curie’s clitoris than in the source material (0 vs 1 if you’re counting).

A lot of Ready Player One is undeniably good fun. The relation between the real world and OASIS is entertainingly introduced (to Van Halen’s ‘Jump’), and in exchanges between IOI boss Ben Mendelsohn (Nolan Sorrento) and Wade, the feel of fighting for something more can come across. A moral message of the film is companies stripping away the fun of games for a bottom line, which in a modern world of loot boxes and net neutrality couldn’t be more pertinent.

Spielberg’s ability to switch from the thrilling to the lachrymose (after wrapping Jurassic Park he got straight on a plane to Poland and shot Schindler’s List) never ceases to amaze me. Perhaps this time he’s overdone it, as by the final sentimental exchange in Ready Player One I was just about ready to drown in all the syrup.

But, if you’ve ever wondered who would win in a fight between Mechagodzilla and The Iron Giant, this is the film for you. Ready Player One is all a bit silly, though there are moments that certainly capture the Spielbergian magic.