Nickolas Bird and Eleanor Sharpe’s documentary, MAMIL: Middle Aged Men in Lycra, about middle-aged male cycling enthusiasts is no tour de force. Coming from directing duo Nickolas Bird and Eleanor Sharpe, MAMIL, which divides its time between the many physical iterations of its acronym (Middle Aged Men In Lycra) dotted across the globe, is one […] 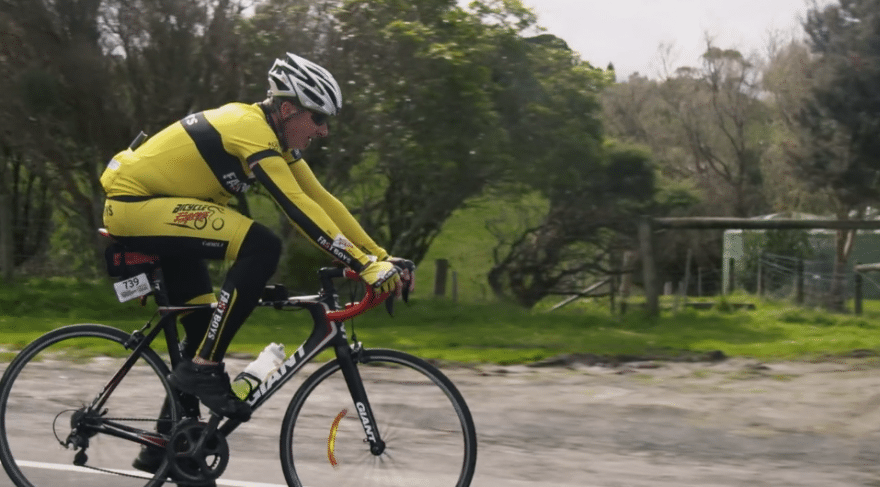 Nickolas Bird and Eleanor Sharpe’s documentary, MAMIL: Middle Aged Men in Lycra, about middle-aged male cycling enthusiasts is no tour de force.
Coming from directing duo Nickolas Bird and Eleanor Sharpe, MAMIL, which divides its time between the many physical iterations of its acronym (Middle Aged Men In Lycra) dotted across the globe, is one of those rare films that keeps you glued to the screen in sick fascination, and not because it stars a cast of middle aged men who’ve poured themselves into Lycra.

This overstuffed, undercooked documentary misses the mark and a real opportunity. What at first feels like it could be a light-hearted insight into a wealth of interesting areas, chiefly modern masculinity, coming into middle age and the spiritual and healing power of communal sport, quickly descends into a one-dimensional, jumbled collection of “lad vids” that would feel better placed on the Facebook pages of the cycling groups the film documents.

The tender, more engaging threads – like that of Adelaide based cycling crew MAMIL who have, over the past several years, raised over $200,000 in an annual fundraising cancer cycle, the emergence and evolution of one of the first gay cycling clubs in New York, and the Los Angeles based group established as a means of supporting those suffering from obesity and diabetes – are quickly passed over. Rare moments that invite empathy, like when one man reveals the benefit cycling has had since being diagnosed with Multiple Sclerosis and another in his fight against depression, are sapped of their emotional weight.

The film instead favours focus on a Lycra-clad lad culture where men verbally push the risks of the sport, the expensive gear and an ugly sense of entitlement to a break after years spent “setting up the family unit.”

It’s this lack of sensitivity that leaves the film feeling tonally deaf. The desperate attempts to frame a community of avid cyclists and their ambitions, whether they be recreational or semi-professional, as a way of reaffirming masculinity, taking back control and getting into shape are never probed deeply enough and sit awkwardly next to more telling moments that are squeezed in and made to feel inconsequential. Wives of riders speak about the consuming obsession that pulls their husbands from family responsibilities and an expert brings to light the lack of racial and gender diversity, both of which are pushed aside in order to celebrate what feels like a quasi-reimagining of a gentleman’s club that’s substituted whiskey and cigars for Bianchi bicycles and Lycra.

MAMIL is in cinemas nationwide one night only 9th April.
Tickets are available here.

Out Now In Cinemas
https://www.thelondoneconomic.com/film/film-review-the-islands-and-the-whales/28/03/