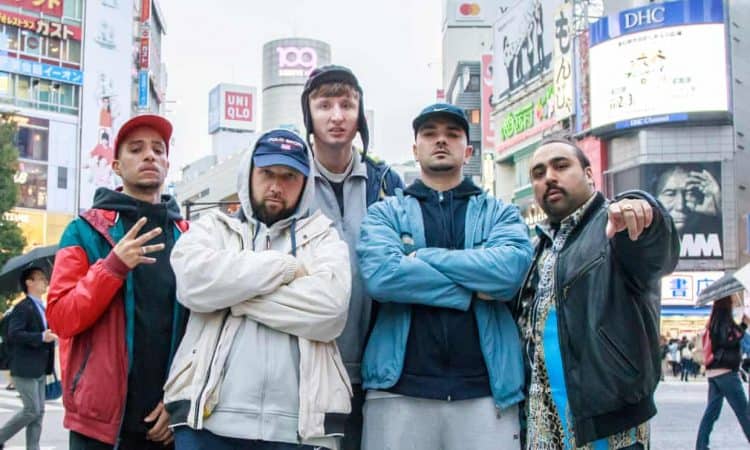 Three years after Brentford’s premier, and only, pirate radio station Kurupt FM closed down, the team’s garage track becomes a surprise hit as a theme to a Japanese gameshow. The station’s central quad is flown out to Japan to develop the brand for an international audience, with self proclaimed manager Chabuddy G (Asim Chaudhry) along for the ride.

The notion of a sitcom cast going abroad for the film is one as old as On The Buses, and the ideas within Big In Japan of self advancement at the cost of friendship and identity are nothing new either. Yet writer Steve Stamp, who also co-stars, has managed to deliver a film of consistency that builds upon and elevates the comic gold of the TV series.

The mockumentary was always built around the delusions of MC Grindah (Allan Mustafa) and much is the same in Japan. His arrogance is played against the meekness of Beats (Hugo Chegwin), the pair as much a totally self dependent couple as Grindah and his dim-witted partner Miche (Lily Brazier).

Their small mindedness contrasted with outsized dreams drives much of the comedy in Big In Japan, starting with a first meal in Tokyo being McDonald’s and continuing as their shiny new manager Taka (Ken Yamamura), convinces the quad to restyle themselves as The Bang Boys.

Steve also has a key role in the film as an air headed drug addict coming out with a few great lines and an unlikely love interest, as well as the fourth member of Kurupt FM, the quiet Decoy (Daniel Sylvester Woolford) who is definitely the father to Miche’s child and taking the mantle from Jim in The Office with his glances to camera.

Also taking up an outsize screen time is Chabuddy G, an undoubtedly hilarious comic creation, even if his antics take place almost entirely outside the main plot. His is the raw desperation of so many chancers you can find in London, just as so much of the appeal of the show is the relatability of the characters even if your interest in garage music is nil.

The film perhaps doesn’t do Japanese culture much favours, presented in the broadest strokes as bubblegum pop, docile women and fever dream game shows. However, if this is your first destination for understanding the Eastern way of life the problem probably lies more with you.

This might be one for the fans as it were, as it might otherwise be difficult to find a point of entry for these deeply flawed individuals. Yet if you were a fan of the show I can’t see any way of going wrong for the big screen version, which shows MC Grindah and company just as equipped for disaster on a bigger scale.