There is an inescapable sadness that runs to the core of Mountains May Depart, the new film from director Jia Zhang-ke. It’s ambitious in its plotting, with three sequential narratives set in differing time periods. The first, set in 1999, is the most intriguing, with characters Liang (Liang Jingdong) and Jingsheng (Zhang Yi) vying for […] 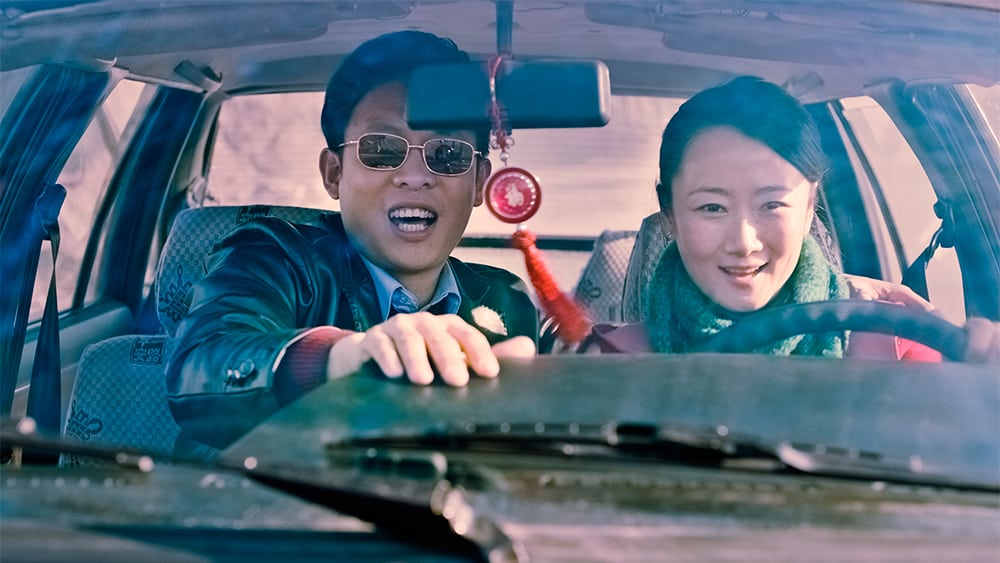 There is an inescapable sadness that runs to the core of Mountains May Depart, the new film from director Jia Zhang-ke. It’s ambitious in its plotting, with three sequential narratives set in differing time periods. The first, set in 1999, is the most intriguing, with characters Liang (Liang Jingdong) and Jingsheng (Zhang Yi) vying for the affections of central figure, Tao, played by Jia’s long-term collaborator and wife, Zhao Tao. Liang and Tao are already dating, but Jingsheng is trying to muscle in and steal Tao from under his nose. Jingsheng is an entrepreneurial businessman who plays, in part, the personification of the rise in rampant capitalism in China, but in reality his affections are awkward and he is not a very articulate man – preferring to make big gestures showcasing how great he is whilst ultimately revealing how conceited he is.

Liang works as a coal miner at a remote and failing mine, and Jingsheng, ever the entrepreneur, spots an opportunity and buys the it. Now in charge, he fires Liang, cutting off his ability to earn money and in turn devalue his usefulness to Tao. This moment is a little on the nose, but rampant expansion and capitalism has many victims, often those who are poorest in society and Jingsheng doesn’t even attempt to hide the hurt he is inflicting. He fires Liang personally.

Jingsheng ultimately wins Tao’s love, but it feels like a hollow victory. They have a son; Jingsheng names him “Dollar”, this being an example of where the dialogue is slightly on the wrong side of clunky. Tao glides through all of this tumult with a degree of frankness that isn’t expected. Her intention towards both men at the beginning seems almost sisterly despite dating Liang. During the film’s second act, set in 2014 and following marital disaster and a lost custody battle, Tao is melancholy but undoubtedly beautiful in her wounded state. She is not licking her wounds; she is dealing with the situation with grace by not letting it define her. Her sadness is still clear in her performance, it clings to every particle of this film as she puts on one hell of a brave face.

Tao’s face slips in the wake of a family tragedy and the switch between seeing a woman with a quiet determination to an emotional, blubbing, quivering wreck is arresting. The events following the tragedy are steeped in traditionalism, which counteracts the absurdity of how far China has progressed (outwardly?) in 15 years. The modern and old is never too far from the surface of this film, but here it is clear how one is evidently winning out against the other.

The third act, set in 2025, is the weakest. Tao and Jingsheng’s son is the main focus, with him seemingly lost in Australia wanting to achieve all of his dreams whilst lumbered with a controlling father and absentee mother and stepmother, he is scrambling around with nowhere to go. The third act is in English and the dialogue significantly drops in quality. I understand the reason for changing the dialogue, and how conflict is created from this decision, but ultimately it breaks the film’s believability and leaves the actors delivering dialogue to horribly stilted effect.

Mountains May Depart’s opening and ending codas are conjoined, and the use of soundtrack is particularly inventive. Tao is featured in both and ultimately this is her story with her attempting to figure out her own life when the country is changing irreparably around her, and how her relationships were made and burned in two distinctly different time periods. Zhao Tao’s performance is extraordinary and her ability to convey emotion through very little dialogue, relying on deliberate movement and silence is exquisite. The rest of the film feels like it is attempting to play catch up with a story that doesn’t quite hit the high notes as many time as its star.