Name three action film heroes? You probably went for… Bond, Bourne and McClane. Or maybe The Rock? Perhaps however it is time to re-consider Ethan Hunt. Tom Cruise has played Ethan Hunt since 1996. 22 years and six films later we arrive at Mission: Impossible – Fallout. Surely this once rebooted character from a short […] 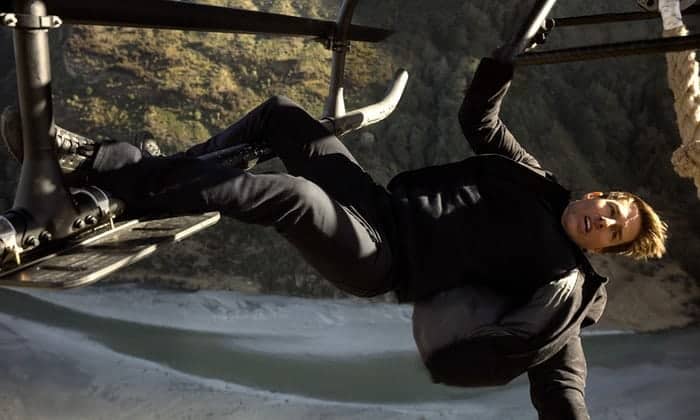 You probably went for… Bond, Bourne and McClane. Or maybe The Rock?

Perhaps however it is time to re-consider Ethan Hunt. Tom Cruise has played Ethan Hunt since 1996. 22 years and six films later we arrive at Mission: Impossible – Fallout. Surely this once rebooted character from a short lived 1960/70s US TV show cannot still be around? Cannot still be relevant? Or even be interesting? Well yes, actually, because Mission: Impossible – Fallout is one of the most engaging and satisfying action films in recent memory.

The premise of the film, directed by Christopher McQuarrie, (who directed the previous Mission Impossible film, Rogue Nation), finds baddie Solomon Lane escaping custody and a whole host dire consequences come to the fore. The new arch villain introduced to the film is a shadowy figure named John Lark, who wants to blow the world to pieces. Ethan Hunt once again steps up to the plate for the Impossible Missions Force (IMF) to fulfill his duties. But this time the CIA, here represented in the form of Erica Sloan (Angela Bassett) questions his motives. Due to the lack of trust between the CIA and the IMF, Erica has brought in mustachioed August Walker (Henry Cavill) to act as a kind of adult babysitter for Hunt. Cavill and Davies are well cast in a role that does not require a lot of them but are delivered with consummate ease. Alec Baldwin also comes along for the ride, offering humour and weight when needed.

All of the hallmarks of a classic Ethan Hunt performance are there from Cruise, including his stiff-handed running across various rooftops, motorbike chases without wearing a helmet (the scamp) and of course free climbing on almost sheer, cliff faces. The light relief comes in the form of Benji, played by Simon Pegg, who is up to his normal high-jinks with rubber masks and various electronic devices. This is not a film that takes itself too seriously and the jokes land when needed and despite a couple of moments of clunky dialogue, most of the exposition feels necessary and engaging. This is not say that the film is overly comic, in truth, it does feel somewhat sullen for long stretches, but this is not really dwelled upon due to the deafening action in front of you.

The film’s narrative willingly ties itself in knots so you’re never sure who is going to double cross who but for all the entanglements and possible disentanglements the narrative is not hard to follow. This is a film that knows where its treasure is buried and McQuarrie does an excellent job of delivering on the action sequences. The standout moment features some terrific close-quarter martial arts in a men’s room where Cavill, Cruise and Liang Yang smash the living daylights out of each other along with most of the room.

The main reasons for Mission: Impossible – Fallout’s success is that it understands the value of both its action sequences and its star lead. All of the action sequences feel muscular, genuinely thrilling and are directed with clarity by McQuarrie. This is not action we’re used to seeing in the Transformer’s franchise for example, with its excessive whip-pans and disorientating editing. Fallout keeps you rooted in the action, feeling every punch and kick, waiting the unexpected twist that takes the battle in a new, exciting direction. Also, Tom Cruise is front and centre here and carries the film with the professionalism and ability we’ve come to expect, with Cruise giving his finest performance since 2014’s Edge of Tomorrow. Cruise may have made a misstep with The Mummy, but here he embodies his character of Ethan Hunt so well, it is almost as if he never takes his IMF costume off.

Go and see Mission: Impossible – Fallout in IMAX or Super Screen if you can and get swept away by an exciting, funny and ultimately satisfying action film that you didn’t know you needed to see.